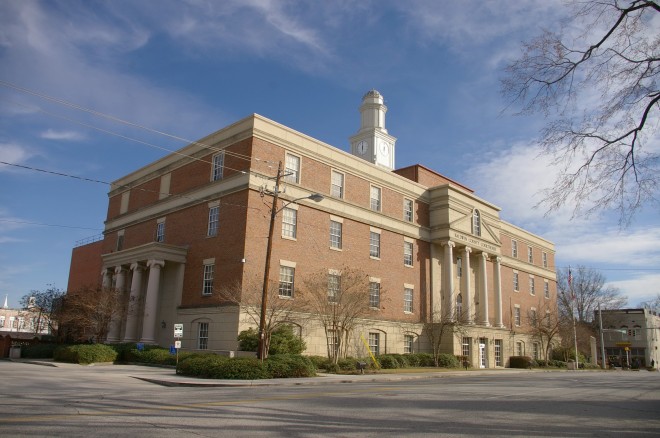 Baldwin County is named for Abraham Baldwin, who was a signer of the United States Constitution and founder of the University of Georgia. 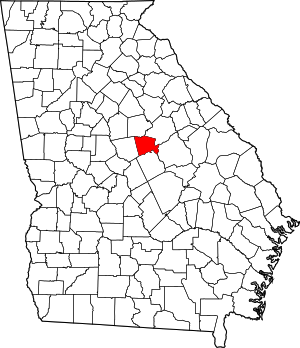 Description:  The building faces west and is a four story buff colored brick and concrete structure.  The rectangular shaped building is located in the center of Milledgeville. The west front has a projecting portico with three openings on the first story and four columns rising from the second story balcony to a header on the fourth story. There are two story porticos with four columns on the north and south sides. A wide horizontal band runs between the third and fourth story. On the center of the roof is a high square cupola with clock and rounded section above rising to a small dome. The roof line is flat. The building houses the County Superior Court, County State Court, County Juvenile Court, County Probate Court and County Magistrate Court of the 8th Judicial Administrative District. The building was renovated in 2018 to 2019 with the removal of the clock tower. The architect was Carter & Watkins Architects and the contractor was Skyline Construction Company of Eatonton.

Description:  The building faces southwest and is a two story buff flagstone, brick and concrete structure. The building is located on landscaped grounds to the northwest of the center of Milledgeville. 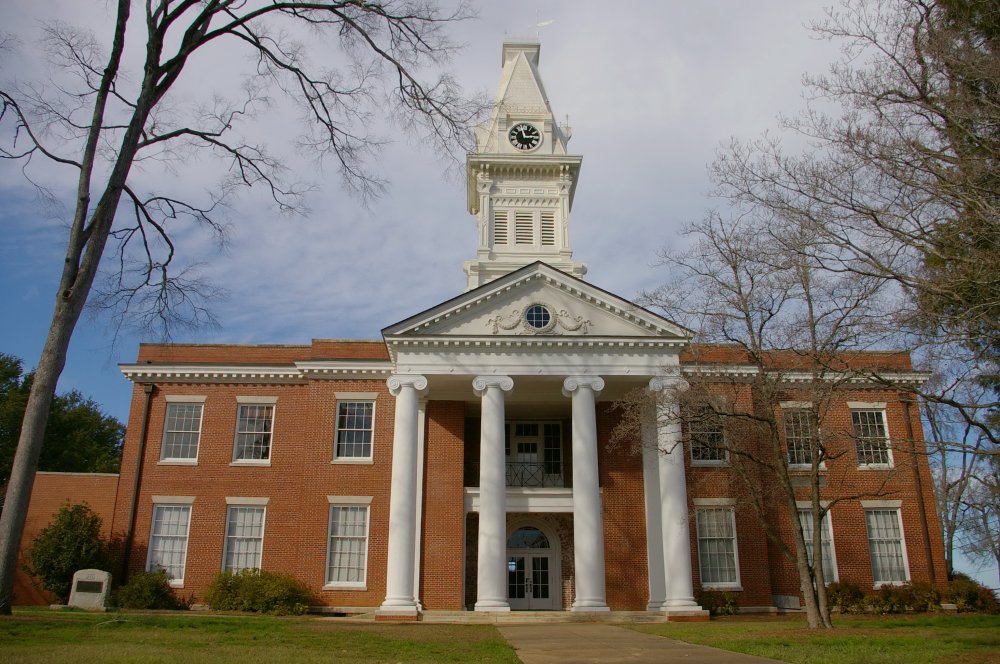 Description:  The building faces south and is a two story red colored brick and stone structure. The building is located on sapious landscaped grounds in the center of Milledgeville to the west of the courthouse. The south front has a large portico with four white colored columns rising to a decorated pediment with circular window. The central section of the building projects from the main building and a wide cornice runs below the flat roof line. On the center of the roof is a high square white colored cupola rising to a clock and steep roof with small platform at the top. The building was remodeled in 1937 and 1965. The building presently stands vacant. 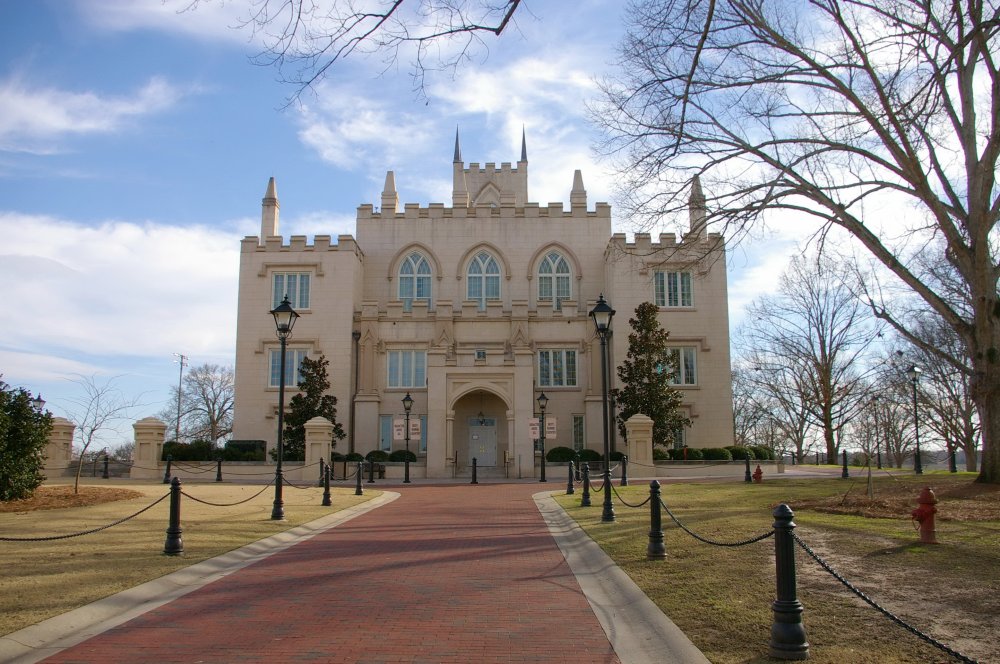 Description:  The building faces north and is a two story yellowish plaster and stone structure. The building is located on spacious landscaped grounds in the center of Milledgeville. The north front has a projecting center section with arched entrance. The second story has three large arched windows. On the corners are projecting square towers with crenulations along the top. On the center of the roof is a large square tower with turrets at the corners. The north and south wings were added in 1828 and 1834. The architect was Henry Hamilton. The east and west porticos were added in 1835 and have granite steps. The building now houses the Georgia Military College. 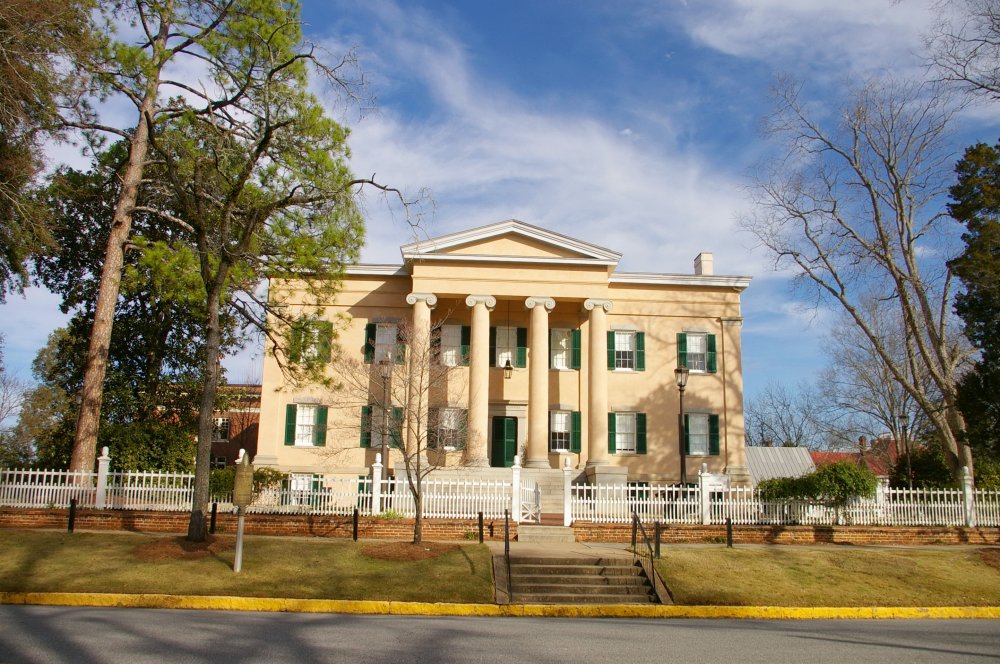 Description:  The building faces west and is a two story buff colored brick and stone structure. The building is located on landscaped grounds in the center of Milledgeville. The west front has a large portico with four columns rising to a pediment at the roof line. In 1864, the mansion ceased to be the Governor’s residence and the capital was moved to Atlanta in 1868. The mansion is now the residence for the President of Georgia College State University. 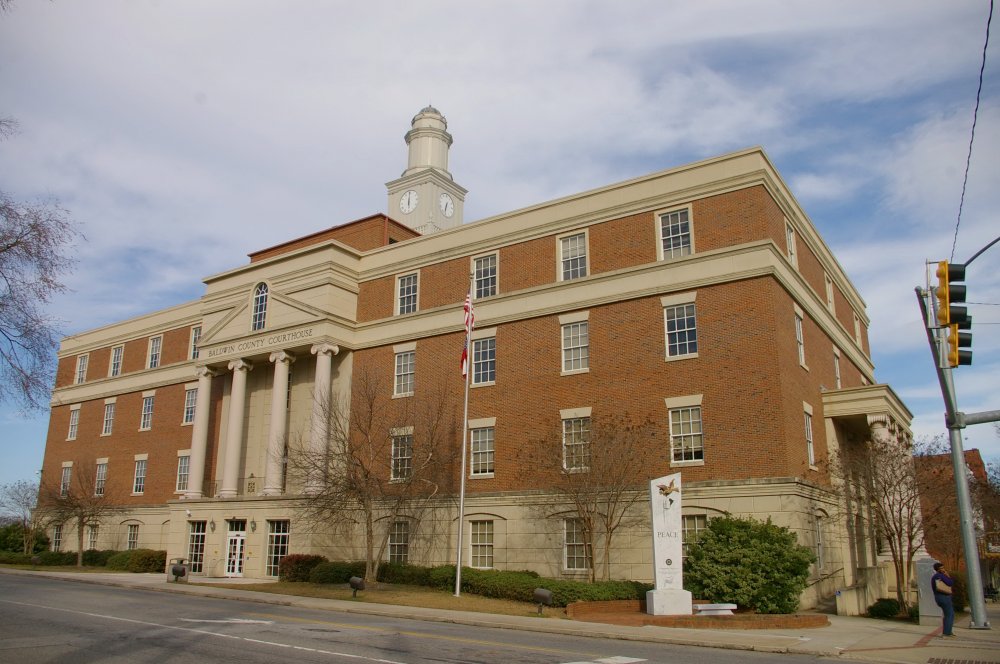 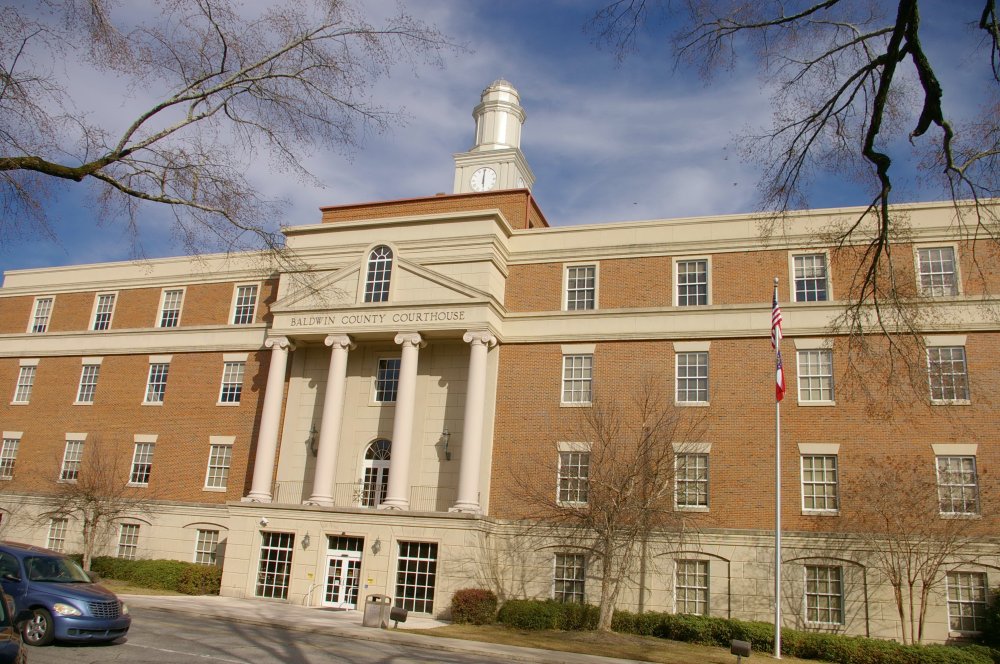 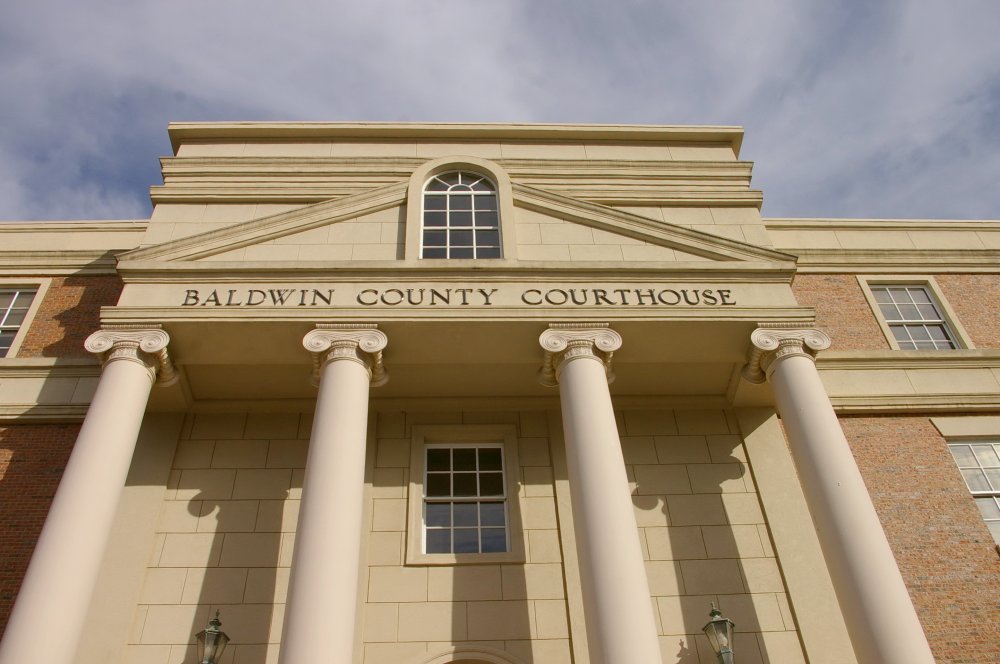 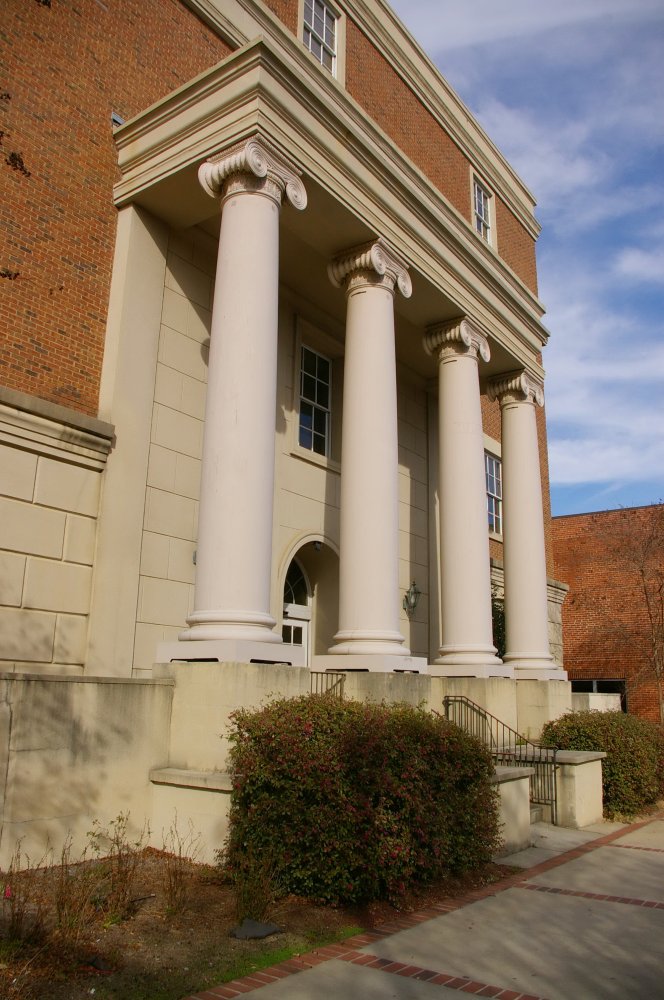 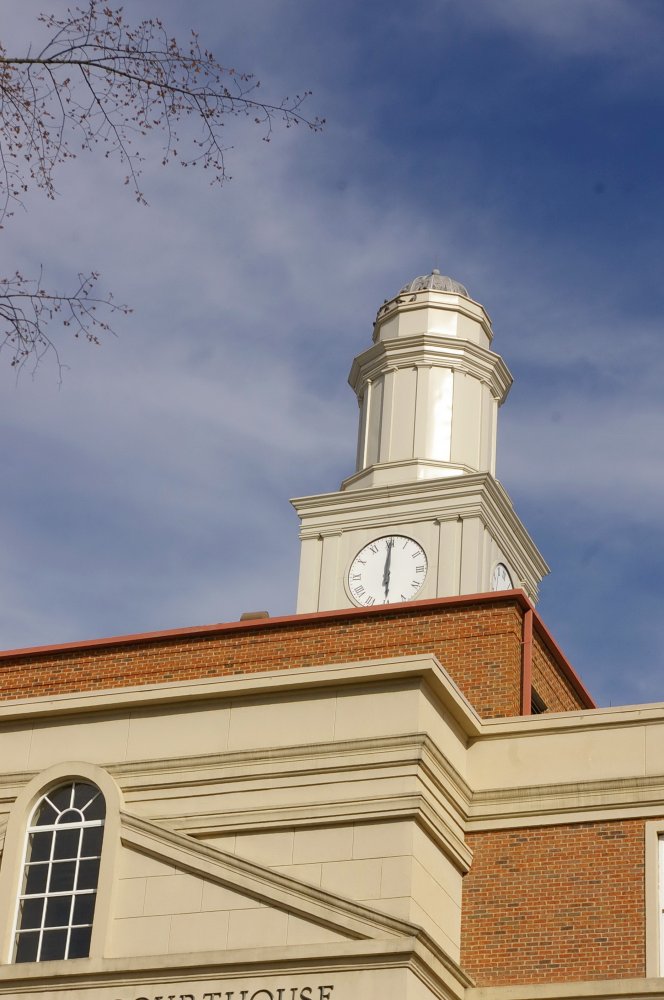 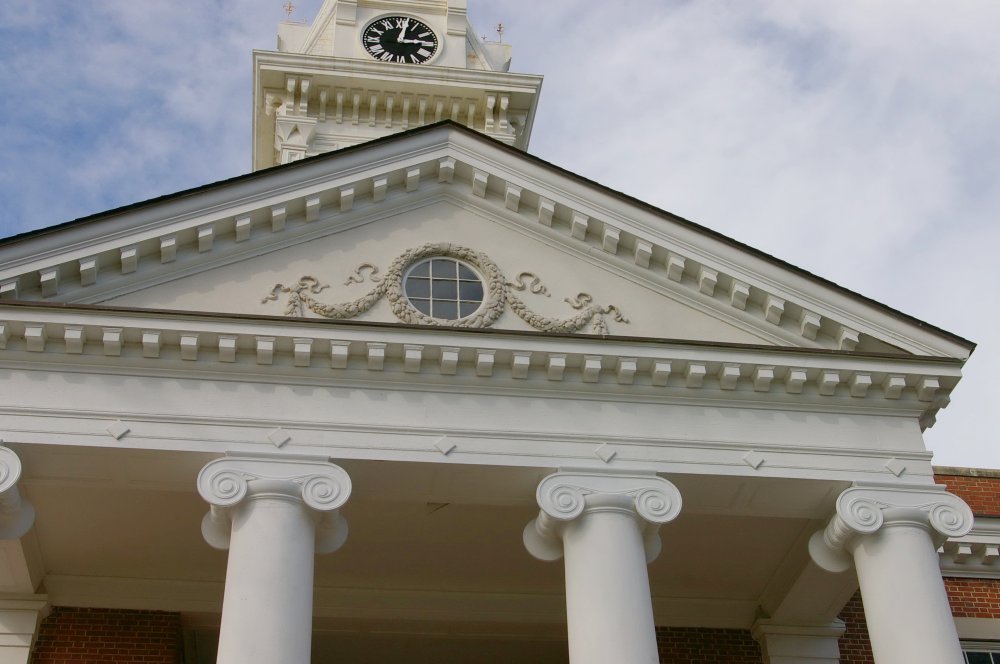