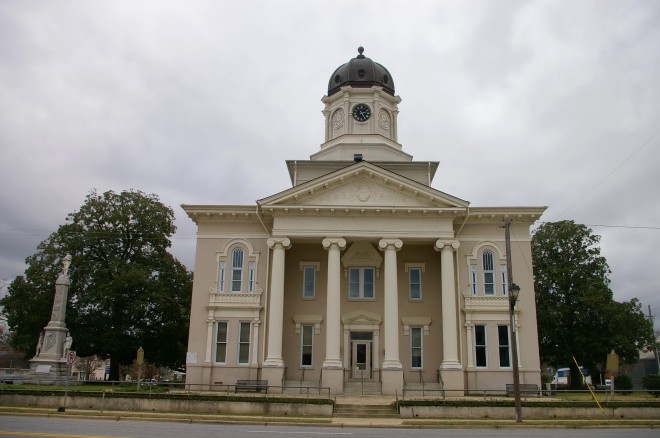 Pulaski County is named for Casimir Pulaski, who was a Revolutionary War soldier killed at the Battle of Savannah, and who lived from 1746 to 1779.

Description:  The building faces north and is a two story buff colored stucco over brick and stone structure. The building is located on landscaped grounds in the center of Hawinsville. The north front has a large portico with four high columns rising to a wide pediment at the roof line. The entrance is framed with small pediment above. On the roof is a large platform with octagonal cupola with clock and black colored dome. The courtroom is located on the second story. An addition was constructed in 1910. The building was renovated in 2000 to 2001. The architect was Brittain, Thompson, Bray, Brown, Inc. of Macon and the contractor was C E Garbutt Construction of Dublin.

See: The architect,  Andrew J Bryan, designed the courthouses in Alabama in Coffee County, Lee County and Monroe County; in Georgia in Colquitt County and Stewart County; in Kentucky in Bracken Couinty and Mercer County; in Louisiana in Pointe Coupee Parish;  in Mississippi in Attala County and Simpson County; and in Texas in Rains County Description:  The building faces east and is a one story buff colored stucco structure. The building is lovated in the center of Hawinsville. There is a central entrance along the east front. The roof line is flat. The building is the Community Services Center.