Adair County is named for John Adair, who was a pioneer, soldier and the seventh Governor of Kentucky. 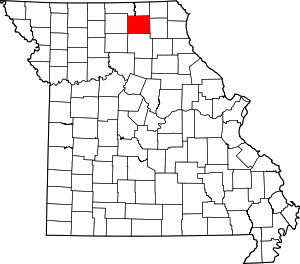 Description: The building faces north and is a three story Ohio blue sandstone and concrete structure. The rectangular shaped building is located on landscaped grounds in the center of Kirksville.The building is 112 feet by 85 feet. The four sides have small porticos with arched entrance with granite columns and small balcony above. The foundation is Quincy limestone. There was a copper cornice and a slate roof. Each corner has a large square stone tower with peaked roof. There are dormers on the hipped roof. In the interior, granolithic and tile floors are supported by a steel and concrete foundation. The walls are plaster and wood paneling. Two sets of metal stairways on the south have birch handrails. All of the stair treads, risers, and newels are of iron, as are the railings which feature simple “rams horn” curves. The original terrazo floors laid in one-foot squares in the rotundas and the landings are bordered with a “Greek Key” design. Floral capitals of heavily glazed terra cotta used throughout. The courtroom is located on the south side of the third story. The white, coffered ceiling is decorated with a painted wreath in the center and various molded rosettes and medallions, while the turquoise walls are plain. An original oak railing separates the spectators from those having business before the court. The golden oak jury box and judge’s bench are also original. The building houses the County Circuit Court of the 2nd Judicial Circuit..