Kiowa County is named for the Kiowa Native American tribe who resided in the region. 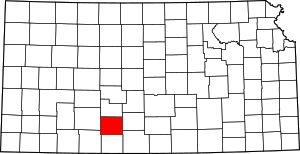 Description:  The building faces north and is a two story red colored brick and concrete structure. The building is located on landscaped grounds in the center of Greensburg.. The building has a raised stone basement and has a recessed center section with porch supported by eight high columns rising to the wide header below the roof line. The windows are large squares of block glass which were replaced after the tornado. In the interior, the County District Court courtroom is located on the south side of the second story. The building houses the County District Court of the 16th Judicial District. The building was damaged by a tornado in 2007 and was remodeled in 2009.

Note:  On May 4, 2007, Greensburg was severely damaged by a tornado and the courthouse was repaired and remodeled in 2009. The architect was McCluggage  Van Sickle & Perry and the contractor was Coonrod & Associates Construction Company, Inc.

History:  The county was created in 1886 and Greensburg was selected as the county seat. The first courthouse in 1888 was a building rented from H C Copper at Main Street and Florida Street. In 1892, the second courthouse was the Bank of Greensburg Building, a three story brick structure rented from C W Myers at the same corner. Court was held in the Opera House when required. In 1899, the building was purchased at a cost of $2,300. The courthouse burned in 1913 and the third and present courthouse was constructed in 1913 to 1914 at a cost of $43,567. The courthouse was rebuilt in 2009 after a tornado.