Ford County is named for James Hobart Ford, who was a Union general during the American Civil War. 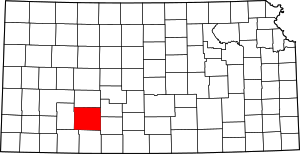 Contractor:  George A Shaul of Seneca

Description:  The building faces north and is a three story gray colored stone and concrete structure. The building is located on landscaped grounds in the center of Dodge City. The building has a raised basement of horizontal limestone stonework and porticos on three sides, each supported by four columns with a pediment at the roof line. A protruding cornice follows the roofline. The roof line is flat. The courtroom is located on the east side of the third story. The building houses the County District Court of the 16th Judicial District. The building was renovated in 1992 to 1993. The contractor was Rhoads Construction Company, Inc.

History:  The county was created in 1867 and Dodge City was selected as the county seat in 872 when the county was organized. The first court met in a rented premise in Dodge City. The first courthouse was a two story brick structure constructed by H S Sitler at the corner of Spruce Avenue and Central Avenue in 1876 at a cost of $8,000. The cost of construction of the second and present courthouse was $100,000.