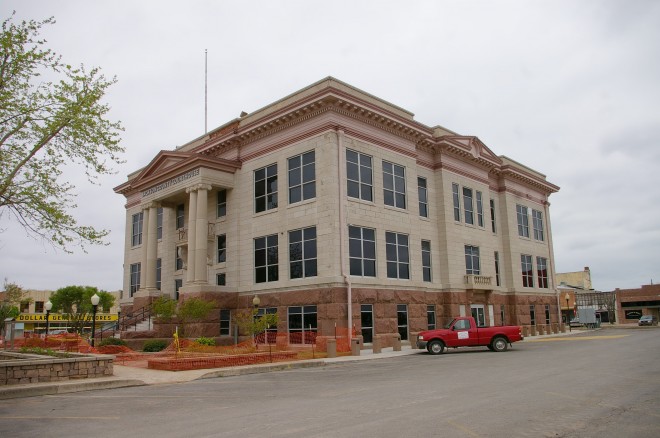 Description: The building faces east and is a two story pink-gray colored limestone, granite sandstone and concrete structure. The building is located on the spacious landscaped grounds of the Courthouse Square in the center of Altus. The east front has a large portico supported by four Ionic columns rising to a pediment below the roof line. A wide cornice runs below the flat roof line. The building has a raised basement built of rough-cut red granite sandstone.

Note:  The courthouse originally had a metal dome which was removed in 1938 due to irreparable corrosion.

See:  The contractor, Rowles & Bailey of Oklahoma City, Oklahoma, constructed courthouses in Nebraska in Phelps County and Nemaha County; in North Dakota in Pembina County; and in Oklahoma in Grant County.

History:  The county was created in 1907 and Altus was selected as the county seat in 1908. The county rented premises until the first and present courthouse was constructed in 1910 to 1911.