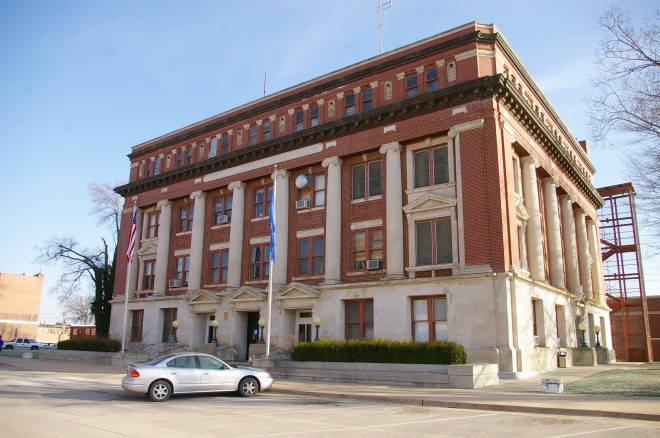 Description: The building faces north and is a four story red colored brick, white colored limestone and concrete structure. The building is located on landscaped grounds in the center of Okmulgee. The brick is laid in a running bond course and the first story exterior is finished with smoothly-cut limestone blocks in coursed layers. The rear facade is a curved 30 foot by 70 foot bay. The building has white colored limestone pedimented entries with scrolled brackets on all sides, and second story and third story paired windows are separated by Ionic columns. A modillioned cornice divides the third and attic stories. The attic story has cutaway cornering and it is surmounted by a plain cornice and unadorned roof line. On each side, six columns rise from the second story to the top of the third story. The roof line is flat. In the interior there is a grand staircase ascending to the second story and the courtroom. The building houses the County District Court of the 24th Judicial District. On the south side is the County Jail. Description: The building faces north and is a two story brown colored stone structure. The building is located on landscaped grounds of the Town Square in the center of Okmulgee to the east of the courthouse. The exterior walls are constructed of quarry-faced sandstone in a coursed ashlar pattern. Quoins accentuate the corner angles. A square wooden cupola is located at the center of the hipped roof. The north front and south side have one story white colored wood porches with balconies above. In the interior, there is a central staircase. The second story has the House of Warriors on the east side and the House of Kings on the west side. This structure was initially built as the Creek National Capitol, and was later converted into the Okmulgee County Courthouse. When the current Okmulgee County Courthouse was erected in 1916, this building in the middle of the town square was converted back into the Creek National Capitol.

History:  The county was created in 1907 and Okmulgee was selected as the county seat. The first courthouse was the Cherokee National Capital built in 1878. The second and present courthouse was constructed in 1916 to 1917. 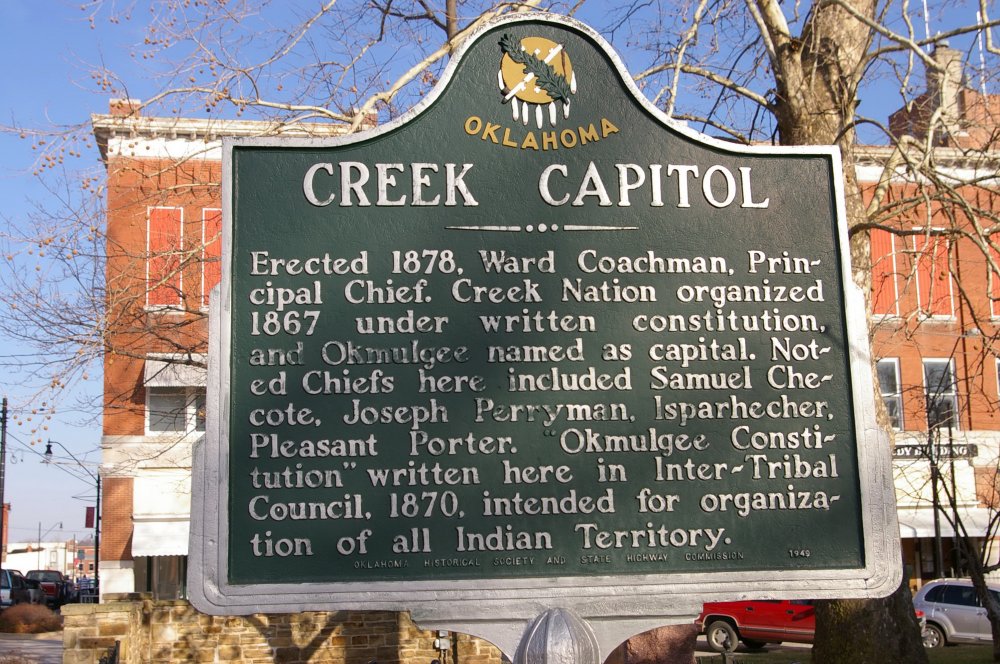