Saline County is named for Saline Creek as the making of salt from the Salines was a major part of the industry of the region. 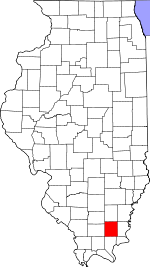 Description: The building faces north and is a two story red colored brick, concrete and glass structure. The building ios located on landscaped grounds in the center of Harrisburg. On the east and west sides large windows are along the first story divided by a wide horizontal concrete band from the windows on the second story. The wide white colored band continues along the roof line. The north and south entrances have a wide horizontal concrete band above the entrance with window above.