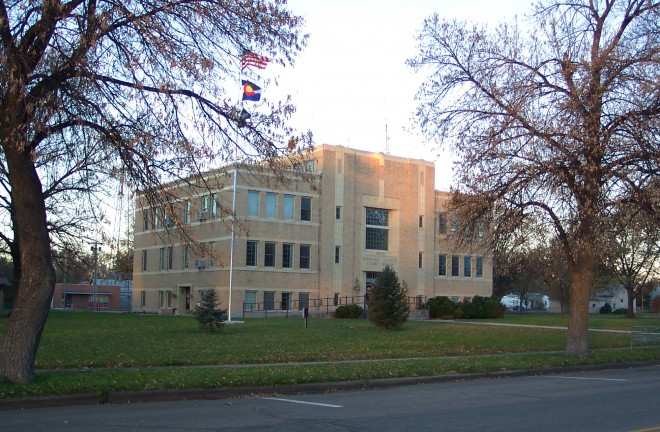 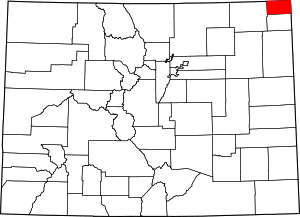 Description: The building faces northeast and is a three story buff colored brick and concrete structure. The building is located on landscaped grounds in the center of Julesburg. The rectangular-plan courthouse is constructed of cast-in-place reinforced concrete faced with multi-hued buff colored brick and terra cotta trim. The three-story central block is flanked by two-story wings to the northwest and southeast. A raised basement creates the appearance of an additional story. The northeast front has a high center section with recessed entrance on the first story. Above the entrance is a large window. Narrow vertical lines with narrow windows are located on either side of the center section. The roof line is flat. In the interior, the main entrance opens to a stairway landing between the basement and the first story. The first and second stories and the hallways have terrazzo floors and wainscoting in a salmon-oink color with mauve borders. Striped mauve and cream colored terrazzo decorating the hallways. There are parquet floors, plaster walls and tile ceilings. The courtroom is located on the northwest side of the second story and has oak parquet floors, wood wainscoting, and a paneled wood ceiling. The area around the judge’s bench is covered with wood paneling (walnut flexwood) from floor to ceiling. There are circular metal and glass pendant lights, suspended from the ceiling with four narrow metal rods. The building houses the County District Court and County Court of the 13th Judicial District. This was a Works Progress Administration project. To the south is a one story annex constructed in 2002.

Note:  The courthouse project, including the construction of 190,000 “cement cider bricks”, was approved November 7, 1936. Under this proposal the Works Progress Administration would provide all unskilled and intermediate labor, and the county would pay for the skilled labor. The WPA covered the cost of construction superintendence. Material costs were split between the WPA and the county with the WPA contributing $4,162 for materials and the county providing $16,211. However, more funds were needed as the scope and cost of the project increased. On September 10, 1938 another WPA application was made requesting additional funds to complete the project, including funds for landscaping and demolition of the old courthouse. The courtroom is located on the northwest side of the second story. The WPA contributed an additional $27,304 under this application.

History:  The county was created in 1889 and Julesburg was selected as the county seat. County offices and the court were housed in several buildings. The first courthouse was a two story brick structure designed by Mark Burke and built by B W Sharpe in 1904 to 1905. The second and present courthouse was constructed in 1938 to 1939 at a cost of $43,022.