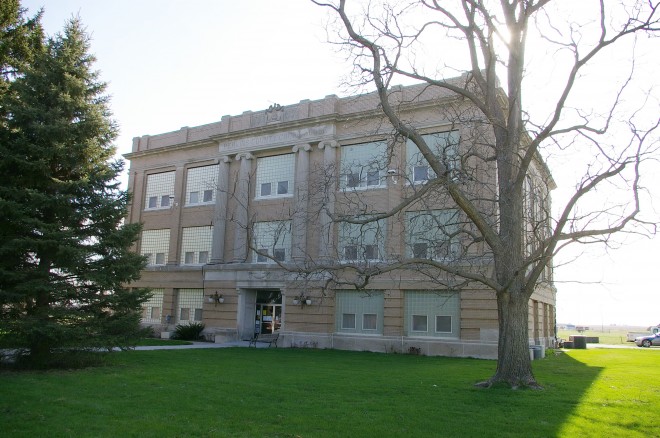 Description:  The building faces east and is a three story brown-buff colored brick, stone and concrete structure. The rectangular shaped building is located on spacious landscaped grounds of the Courthouse Square in the center of Grant. The east front has four fluted stone columns rising from the second to the third story. The first story entrance is recessed. Two distinctive two-globe wall lights have small lion’s heads and a torch shape executed in metal flanking the entry. A wide cornice runs below the flat roof line. In the interior, the floorplan is a truncated X-shape on the first story, but is T-shaped on upper stories. Notable interior elements include grey marble staircases and wainscoting, metal banisters in a geometric pattern, moulded plaster panels and cornices in hallways, and green metal counters in offices. The district courtroom is located on the third story in the northwest corner and it retains a number of important original features, including attractive dark woodwork of the bar and judge’s bench, moulded pilasters set on high bases, and distinctive light fixtures. The building houses the District Court and County Court of the 11th Judicial District. 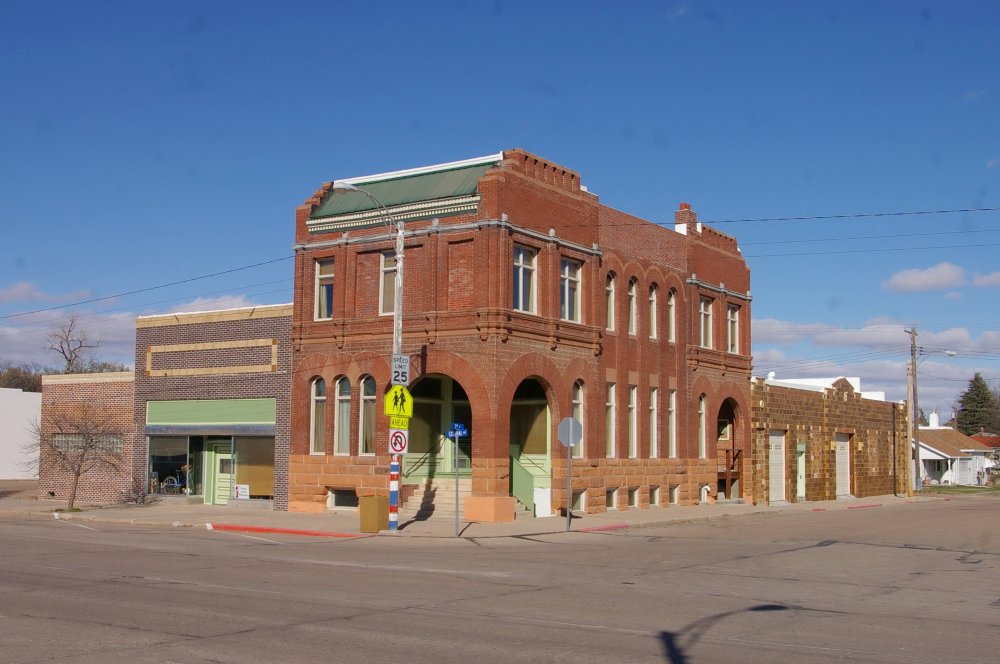 Description:  The building faces west and is a two story red colored brick and rusticated stone structure. The  rectangular shaped building is located in the center of Grant. The southwest corner has an arched entryway supported by massive columns. Along the south side towards the east is another arched entrance. The first and second story windows are separated by pilasters. The second story windows are arched and a corbeled brick cornice is at the flat roof line. This former courthouse was originally built as the First National Bank building and in 1901 it was converted into the courthouse. After the new courthouse was erected in 1926 this building has served as the Grant, Nebraska Post Office, a barber shop, and an antique store. 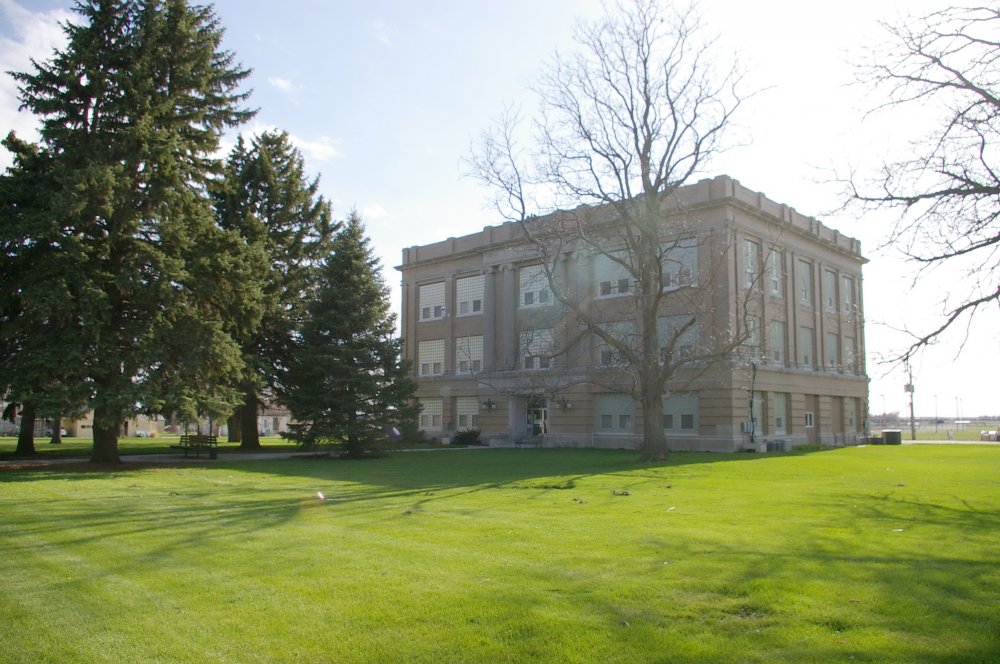 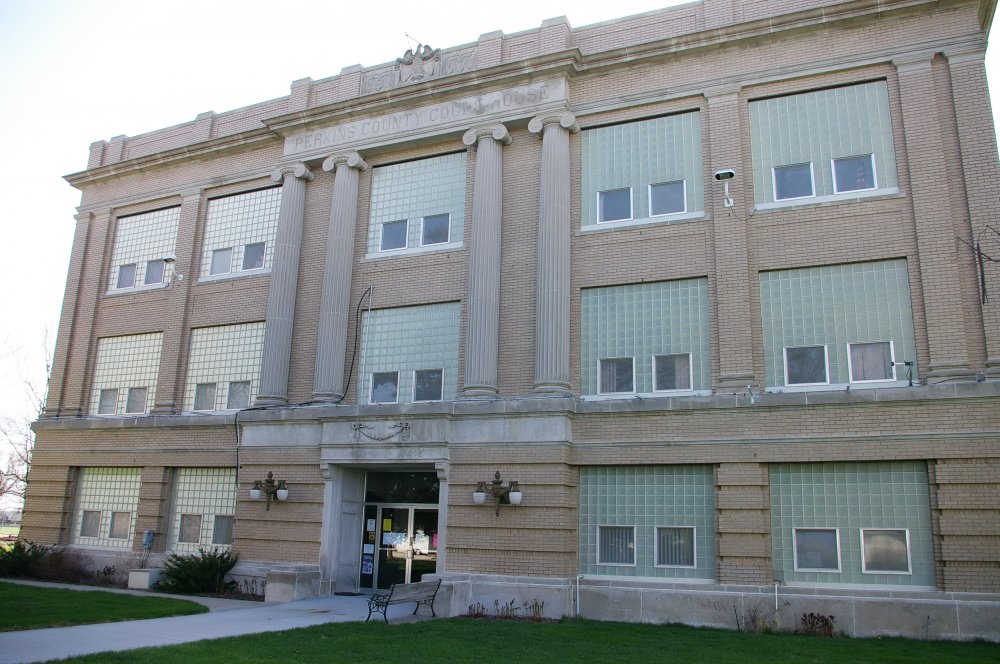 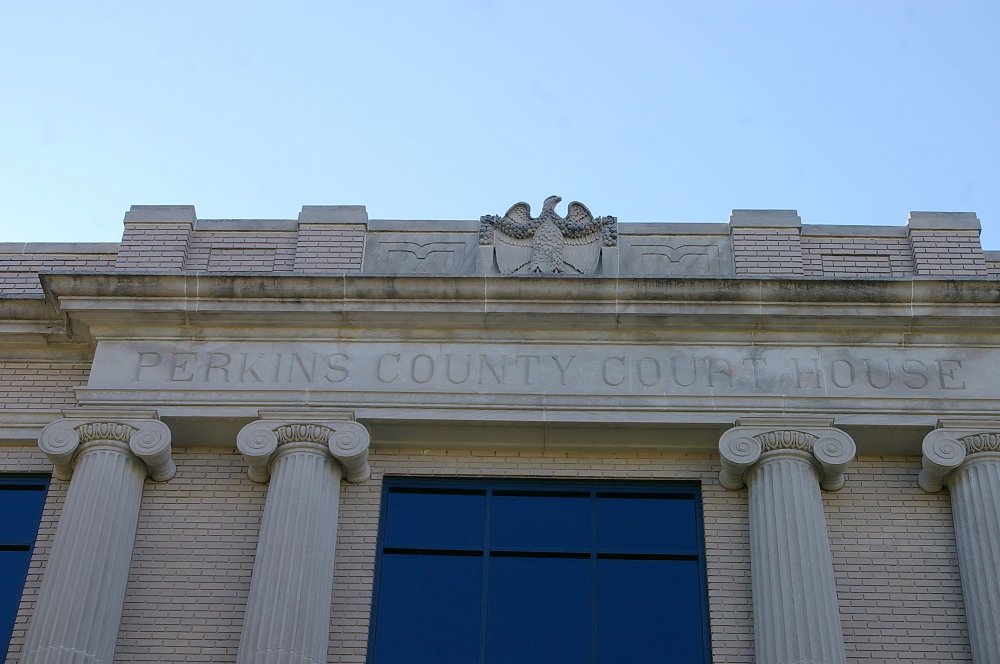 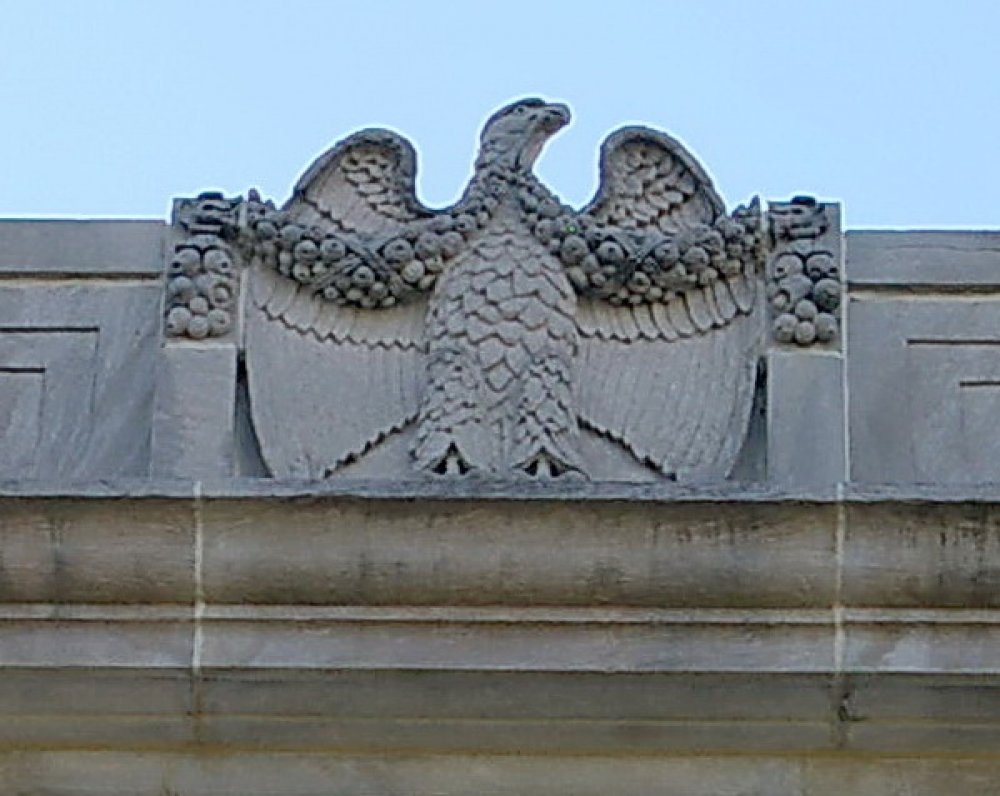 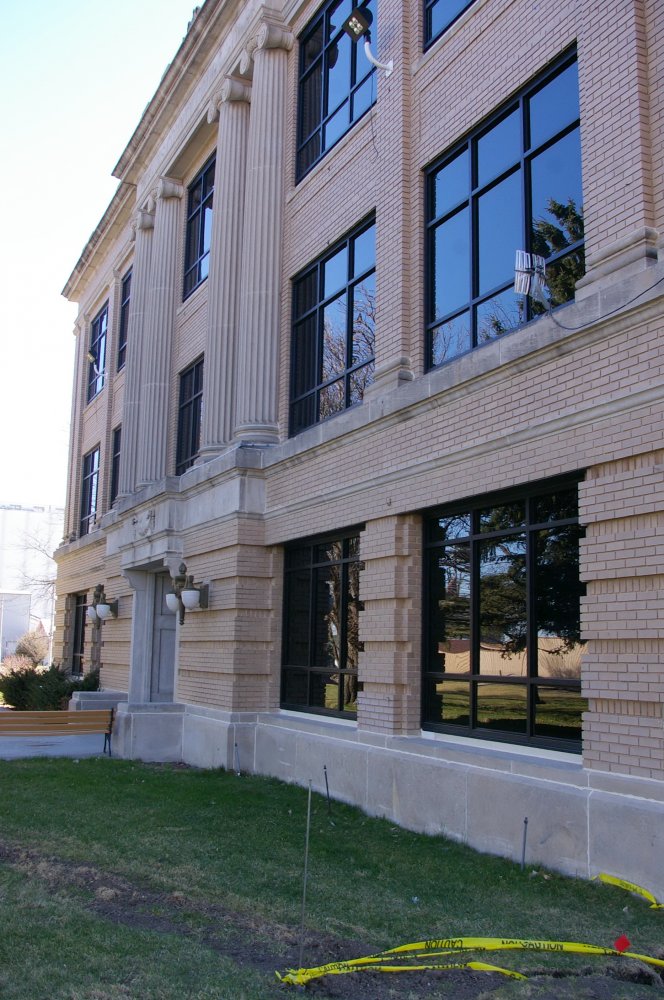 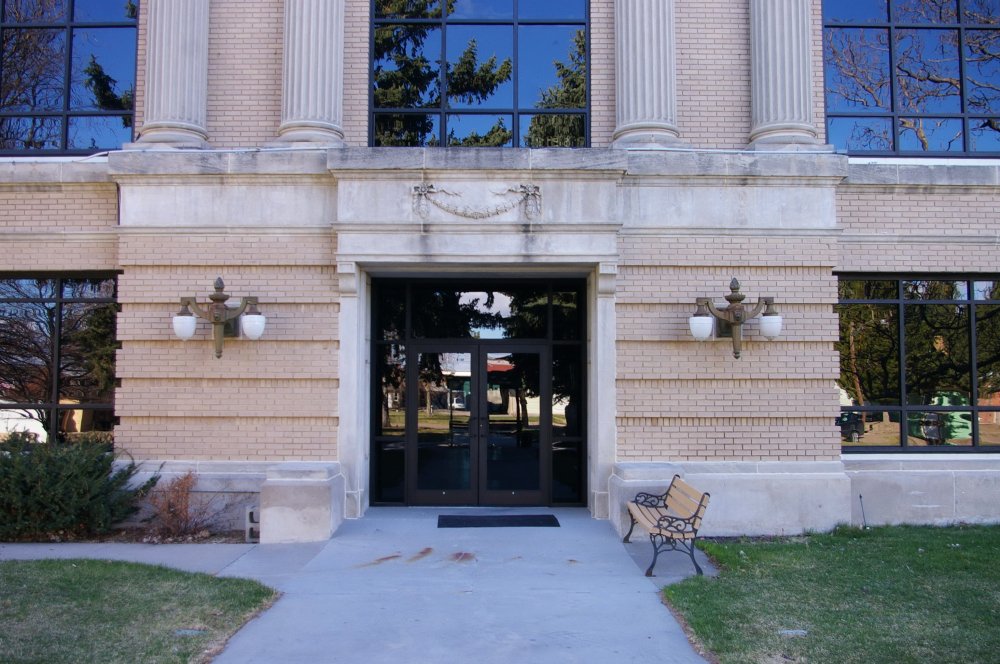 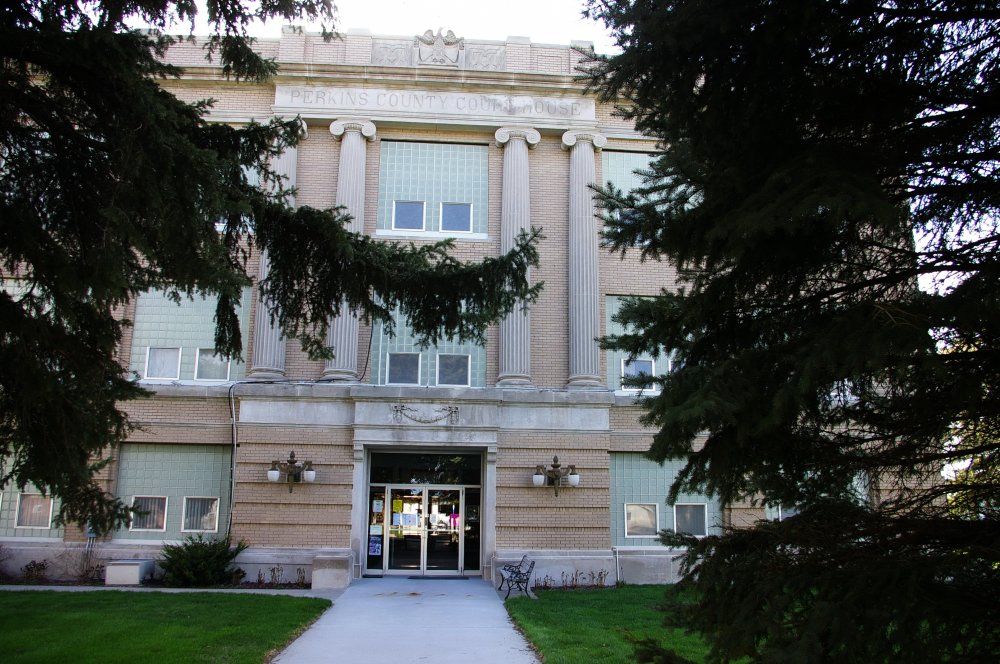 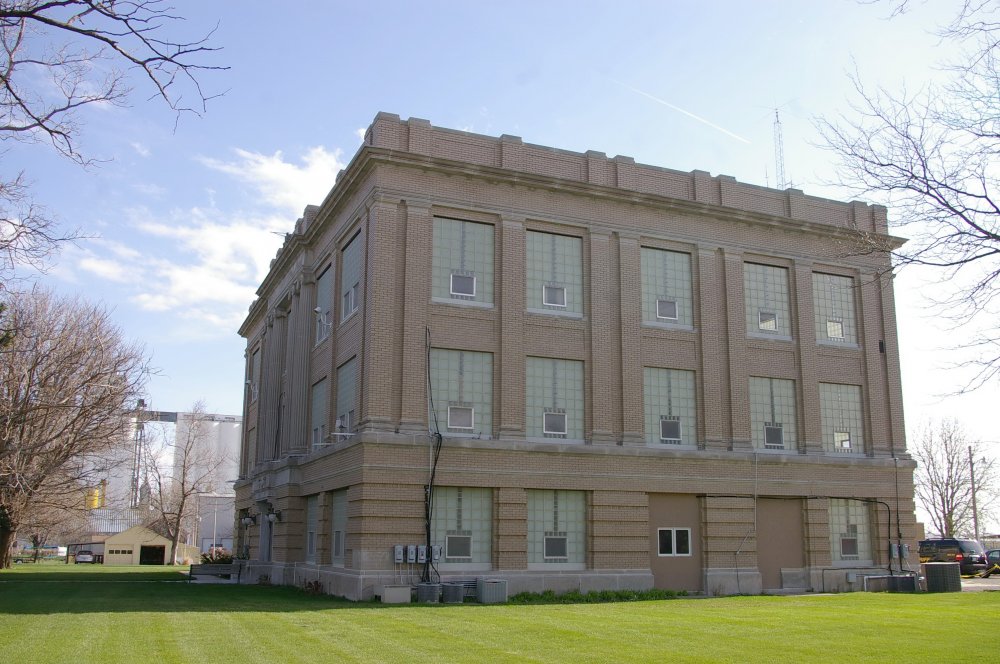