Noble County is named for James Noble, who was the first United States Senator from Indiana. 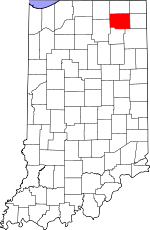 Description:  The building faces east and is a three story red colored brick and stone structure. The square shaped building is located on the landscaped grounds of the Courthouse Square in the center of Albion. The center section of the east front projects from the main building and has an arched entrance on the first story. On the second story are three narrow arched windows and a round tower on the south side which rises to a small octagonal cupola. In the center of the building is a large square clock tower with round turrets. The base of the building is white colored course stone. The building houses the County Circuit Court and the County Superior Court of the 6th Judicial District.  To the west is the Old County Jail and to the south is the County Courthouse Annex.

Description:  The building faces south and is a two story brown colored brick and concrete structure. The building is located on landscaped grounds in the center of Albion to the south of the courthouse. The building has a rectangular shaped east wing which joins a square shaped concrete and glass entrance section on the west side.  A recessed rectangular shaped west wing comes behind the central entrance section. The windows are vertical and the roof line is flat.