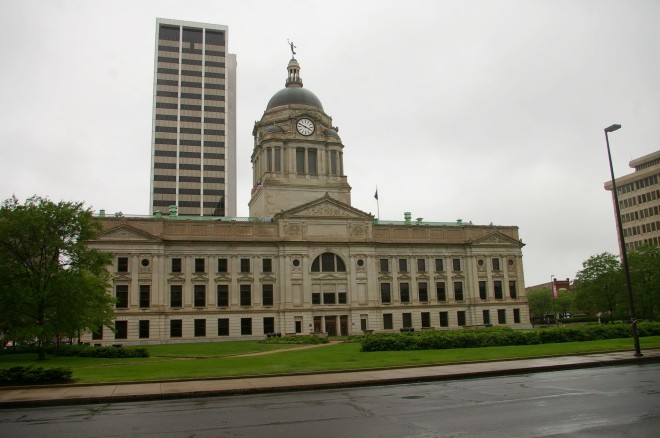 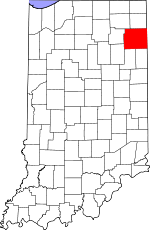 Description:  The building faces east and is a four story gray colored Vermont granite, limestone and concrete structure. The building is located on landscaped grounds in the center of Fort Wayne. The building is constructed of blue Bedford limestone and Vermont granite. The courthouse was designed in the styles of Grecian, Roman, and Renaissance with Doric lines of the first story, Iconic columns on the second story, and Corinthian and Roman Imperial styles on the third level. Along the east front, the center entrance has high columns and a pediment extending above the roof line. On the north and south are protruding sections with columns and pediments. The base is horizontal stone. Along the roofline is a wide stone band. Rising from the center of the building is a large square stone dome with clock and black colored roof. At the top is “Lady Liberty” as weather vain. In the interior, on the first and second stories, gleaming white colored Italian marble covers the walls and stairs providing a striking contrast to the richly variegated coloring of the scagliola on the pilasters and columns. At the north side is the grand staircase. On every level, intricately laid Zanesville mosaic tiles color the floor and layer upon layer of multi-colored and gilded decorative plaster moldings surround the artfully stenciled coffered ceilings. Nearly all of the walls on the third story are paneled in scagliola, with some courtrooms exhibiting five different hues within one room. The doorways to each courtroom are crowned with a pediment and architrave molding in scagliola, and relief plaster ornamentation decorates the frieze area above the door level. The circuit court room occupies the north end of the third story of the building and the superior court room the south end. The building houses the County Circuit Court and the County Superior Court of the 7th Judicial District. Description:  The building faces south and is a ten story gray colored concrete and glass structure.  The building is located on landscaped grounds in the center of Fort Wayne on the north side of the courthouse. Named as the Edwin J Rousseau Centre, the building houses the City Hall and County Offices. The first and second stories cover the block and a center tower rises to ten stories. The roof line is flat. The windows are horizontal.