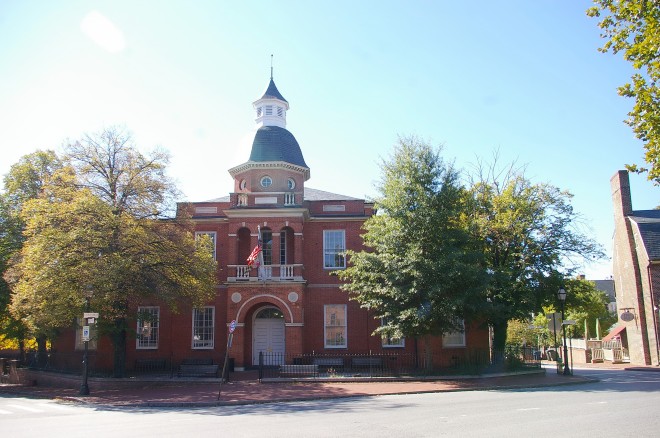 Anne Arundel County is named for Lady Anne Arundel, who was the daughter of Thomas Arundel of Wardour and also, was the wife of Cecilius Calvert, Second Lord Baltimore, founder of the Maryland colony.

Description:  The building faces northeast and is a two story building red colored brick and wood structure. The northeast front has an arched porch with balcony on the second story which has three narrow arches. The recessed entrance on the first story is arched. On the roof is a large octagonal cupola with green colored roof and smaller white colored cupola at the top. The building houses the Circuit Court. The building was enlarged in 1892. The architect was Jackson C Gott. Additions were added in 1939 and 1949. A large Colonial Revival wing, designed by Earle S. Harder and Leonard Dressel, Jr., local architects, was built between 1949 and 1952. In 1994 to 1997, the new 240,000 square foot addition, designed by Washington, D.C. architects Spillis, Candela & Partners, Inc., represents a sensitive expansion, which echoes architectural elements of the old courthouse and the surrounding historic district of Annapolis. Description:  The building faces north and is a four story red colored brick, concrete and glass structure. The building is located on landscaped grounds. The north front is curved with an extended canopy and pillars and with gall walls behind. The entrance is on the second story. On the east side is a high square brick tower. The roof line is flat. The building is names as the Robert F Sweeney District Court Building and houses the District Court,. Architect:  Wheeler, Bonn, Shockley & Associates for Phase I and II