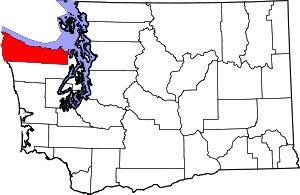 Description:  The building  faces west and is a two story dark red colored brick and concrete structure. The building is located on landscaped grounds in the center of Port Angeles and has two large white colored columns supporting a header and framing the entrance. which section extends from the main building. A protruding cornice runs below the roof line. In the center of the building rises a large square brick clock tower. The bell in the tower was shipped around Cape Horn from Boston. The interior of the courthouse includes an entry vestibule and a large central hall faced with marble and decorative scagliola. The scagliola is about three-sixteenths of an inch thick, applied to the plaster walls. The central hall has a classical cornice molding and Ionic pilasters at the entries. Double curved stairs at either end of the hall lead to the second story. The courtroom is located on the second story and still retains original wood trim and furniture. An addition was constructed on the east side in 1979. The architect was BJSS ( Bennett, Johnson, Slenes & Smith ) of Seattle and the contractor was Peter Kiewit Sons Company, of Seattle.

History:  The county was created in 1854 and New Dungeness was selected as the county seat. The first courthouse was built with local labor on land donated by Elliot Cline in 1860. The county seat was moved to Port Angeles in 1890. The county rented premises in the Nelson Block on West Front Street and to the ground floor of the Greenleaf Hotel at Second Street and Valley Street in 1891. The hotel burned and the county moved to the McInness Building on East Front Street and Laurel Street. The county purchased the Catholic Church on Lincoln Street which served as the second courthouse. The third and present courthouse was constructed in 1914 to 1915.