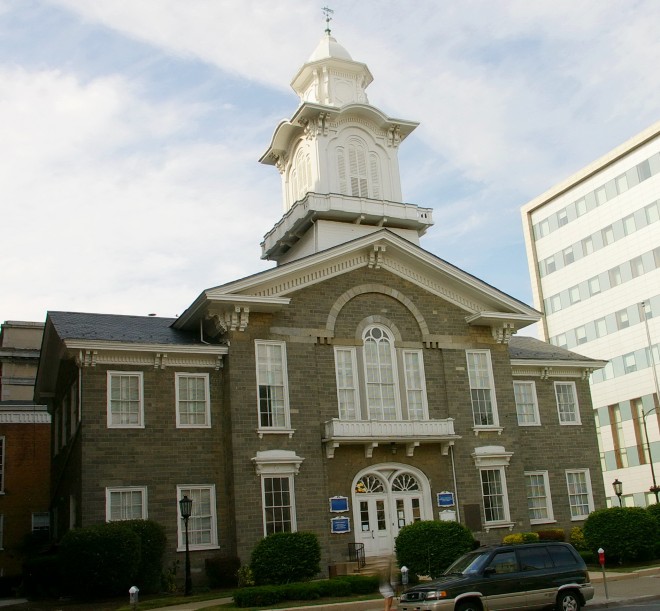 Lehigh County is named for the Lehigh River which name is derived from the Delaware Native American term “Lechauweki” or “Lechauwekink” meaning “where there are forks”.

Description:  The building faces south and is a two story light brown colored brick and wood structure. The building was remodeled in 1864 to the Italianate style. The south front has a projecting center section with arched entrance on the first story and three high windows on the second story with balcony. There is a gable at the roof line with large white colored cupola rising in tiers. The building has east and west wings. In 1864, the architect was Eber Culver and Gustav Aldoph Achbach and the contractor was Henry Smith. In 1880 to 1881, the west wing was constructed. In 1914 to 1918, the Beaux Arts north stone faced wing was constructed. The architect was Henry Anderson and the contractor was Butz & Clader. The engineer was Robert S Rathburn.

Note:  The first court was held in the hotel of George Savitz on the main square in Allentown, which later became the Hotel Allen. In 1813, the court moved to the upper story of the prison building.  John Yeakel obtained the plans for the 1800–1804 courthouse in Lycoming County which were followed and the cost of the courthouse was $24,937. The cost of the 1864 remodeling was $57,236 and the cost of construction of the 1914 addition was $330,000. Description:  The building faces south and is an eight story glass, stone, steel and concrete structure. The building has sunset red colored granite from Texas and charcoal gray colored granite from Minnesota. The north section rises nine story with a lower section on the south and a lower glassed section along the front. A long porch runs along the first story with the entrance towards the west side. The north side has a three story section. The building has horizontal windows. The roof line is flat.  The building was remodeled and enlarged in 1964.