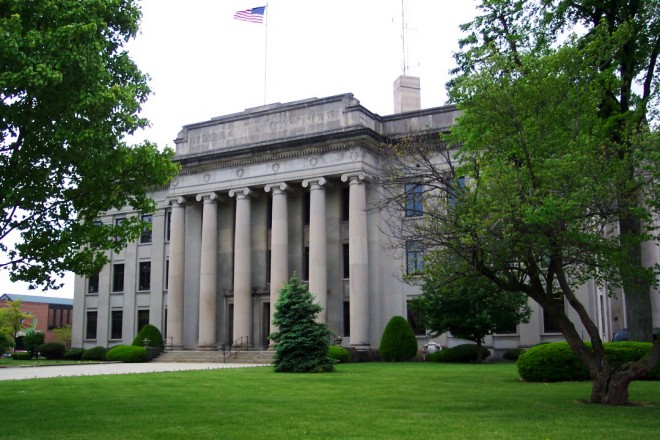 Mercer County is named for Hugh Mercer, who was an officer in the American Revolutionary War and who died at the Battle of Princeton.

Description:  The building faces east and is a three story gray Bedford limestone  structure. The north front has six large columns rising to the top of the third story with a large header and a wide cornice which encircles the building. Inside there are walls furnished with Vermont, Tennessee and Alabama marble. A grand staircase has Italian black marble. In the center is a stained glass dome.

Note:  Mercer County is proud to have its courthouse on the National Register of Historic Buildings. Ground was broken for the courthouse in May, 1921. The cornerstone was laid in July, 1921, and the building was completed in July, 1923. The courthouse was constructed and decorated for under $500,000 and today is insured at $20 million.

On the day of dedication, September 3, 1923, some people were vocal in their opposition to the use of the old-fashioned “V” in place of “U” in the chiseled words COUNTY COURTHOUSE. The blueprints called for a “U” and not a “V,” but a stonemason was responsible for the change. The courthouse today is as it was on the day of its dedication. The exterior is gray Bedford limestone, complemented by forty-foot high columns that are four feet in diameter. There are six columns at the front entrance and four columns at the side and back entrances. Each column is topped with an egg and dart design and a crest. Above the columns, an olive branch wreath is  arved into the limestone. The bronze doors open onto a hall of marble. The huge marble panels on the rotunda walls, corridors and lobby came from Vermont, Tennessee, and Alabama. The marble is 1 ½ inches thick, and the wall underneath is cement on the first two floors. On the third floor, lighter-weight brick is used in place of the cement. The construction is all of poured cement, with no beams used. In addition to the three floors, there is also a full basement and a lower basement. Each suite of offices was constructed with its own restroom, and marble was used in the public restrooms on the first floor.

The stairwell encircles the heart of the courthouse, as the stair railings are cut concave to the radius. Architectural students have toured just to see the engineering of these stairs. The railing is Italian black marble, and 446 carved newel posts lead visitors to the three floors of county offices tangent to the circle. The black marble would be irreplaceable today and is also used for window ledges throughout the courthouse. Several types of fossils have been discovered in the marble, including a nautilus shell and a prehistoric shark tooth. The ornamental band around the rotunda features the motif of Greek figures from the Athenian Parthenon, 432 B.C.

A magnificent chandelier of solid brass graces the stairwell between the second and third floors. This beautiful fixture brings to mind a huge crown set off by uniquely designed frosted shades. The chandelier is attached to a pulley so that the bulbs can be changed. The dome of the courthouse is stained glass, crowning the Grecian-styled edifice. There are 112 plaster rosettes in graduating sizes encircling the glass dome. The sun’s rays filter through the art glass, forming a halo and warming the corridors below. Among the glass dome’s symbolistic images, the Torch of Justice lights the way for justice in the court. The dome was designed acoustically so that the sound of a speaker’s voice reverberates from the dome in concentric circles about the speaker. A spacious auditorium with a stage area at one end is situated inside the south entrance of the building. The auditorium is the only room in the courthouse paneled in oak; all other woodwork throughout the courthouse is mahogany.

Mythological griffins guard the Mercer County Courthouse. Griffins had the body of a lion and the head and wings of an eagle. Some had the paws of a lion; others had the claws of the eagle. The griffins can be found on the lamps of the courthouse entry, on the grand chandelier, on the lamps adorning the bench of the Common Pleas Courtroom and on the frieze of the first- and second-floor rotundas. The judge’s bench today is offset by a red velvet curtain reminiscent of the old English tradition. In England, so the story goes, when the courtroom became overrun by angry spectators, the judge would jump behind the curtain, a door would shut, and he was protected until order was restored. The judge’s platform is wide enough to accommodate chairs for the three judges required in some cases, the last of which was a murder trial in 1995.

The courtroom is the same as it was in 1923. The ceilings are ornate with 30 beautiful “rosettes.” The jury box has the original leather-covered chairs and brass rails. The doors have the original brass locks and doorknobs. The railing, benches and tables, too, are as they were then. The floor is the original cork. Grecian key designs embellish eighteen silk panels on courtroom walls and the wood trim of the judge’s bench.

Portraits of past judges hang on the silk panels. With the inclusion of Judge Jeffrey R. Ingraham, there have been only five judges serving the Common Pleas Court General Division for 75 years.

The coatroom used by the jurors is still as it was constructed. The small prisoner “holding cell” is now used for storage. The huge brass grid works found throughout the rooms of the courthouse are the original covers for the ductwork for the envisioned built-in air conditioning of that time. The original jury wheel used in the jury selection process is till in the courthouse on and on display in the judge’s chambers. The jury wheel was used in Mercer County until 1991. 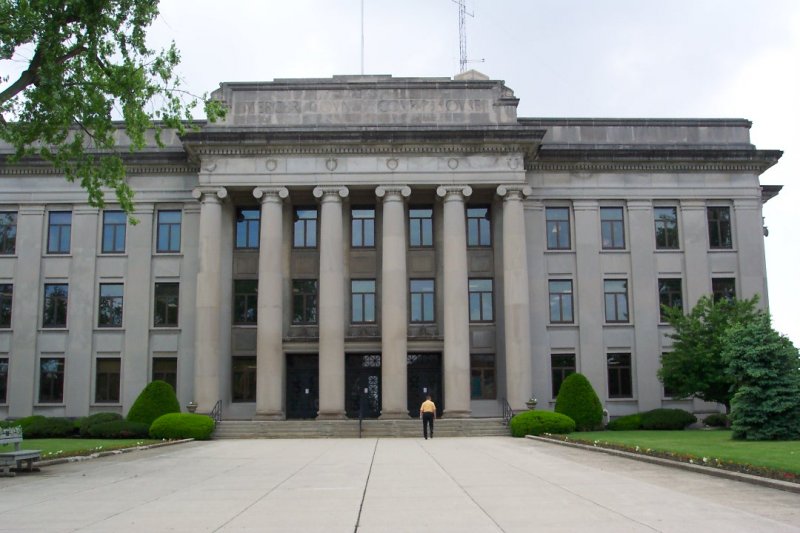