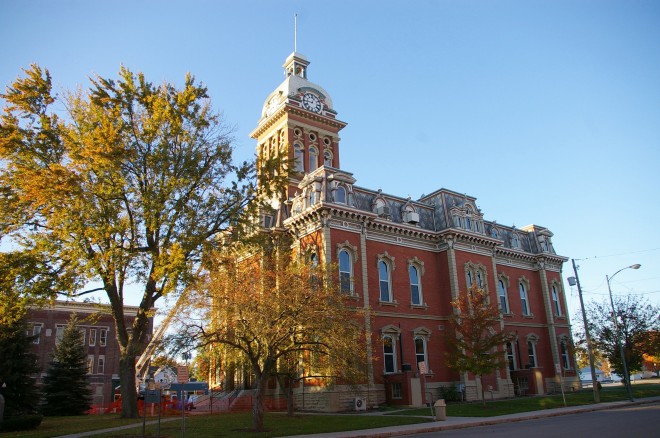 Adams County is named for John Quincy Adams, who was President of the United States. 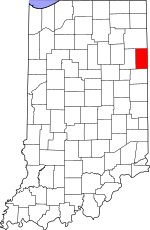 Description:  The building faces south and is a two story red colored brick and stone structure. The building is located on landscaped grounds in the center of Decatur. The windows are narrow and arched. White colored stone trims the corners. Decorative sandstone quoins, incised with an irregular honeycomb pattern, known as vermiculated work, offset the red colored brick body of the building. Patterned slate and dormer windows highlight the steep slope of the distinctive mansard roof. In the building center is a high square red colored brick dome with clock and silver colored roof. The base of the building is course stone. The courtroom is located on the second story. The wall behind the judge’s bench is detailed with three large panels are attached to the wall, accentuating the importance of that position. The center panel is taller, wider, and more ornate than the two side panels. Paired rosette-topped pilasters like those on the judge’s bench flank either side of the central panel. The cornice that crowns the central panel is heavier and more ornate; the side panels are topped with simple cyma recta cornices. Overall, the finishes found in the courtroom are formal but simple. All of the trim and wood moldings are natural wood finished to match the courtroom furniture. All of the doors are also matching wood with a textured frosted glass window above two vertical rectangular panels. The building houses the County Circuit Court and the County Superior Court of the 9th Judicial District.

Note:  The design of the courthouse was copied from the courthouse in Defiance County, Ohio that had a front tower. The building design was not changed to accommodate a tower in that position and the tower was not properly supported. In 1902 Wing & Mahurin of Fort Wayne was hired to design a front tower. The color of the tower brick differs from the rest of the building. When first built, the courthouse had entrances on all four sides. The side entrances were removed sometime after 1902 so hall space could be converted to offices. The architect, J C Johnson of Fremont, Ohio also designed the courthouse in  Randolph County.

History:  The county was created in 1835 and Decatur was selected as the county seat in 1836. The first courthouse was a two story frame structure built by John Reynolds and Samuel L Rugg in 1839. The second and present courthouse was constructed in 1872 to 1873 at a cost of $78,979. 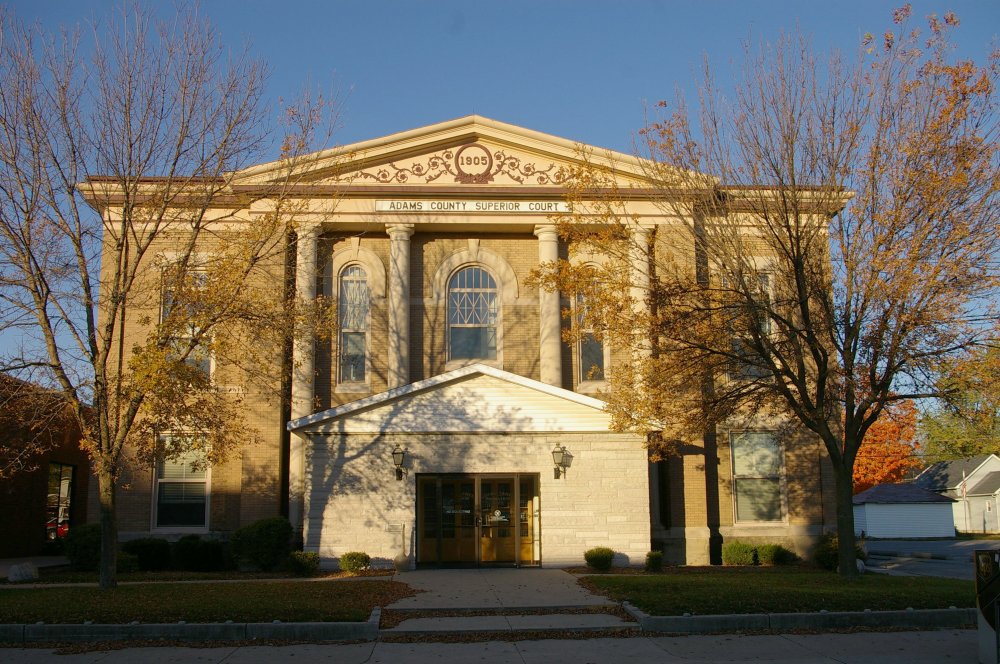 Description:  The building faces east and is a two stone buff colored brick and stone structure.  The building is located in the center of Decatur to the south of the courthouse. The north front has a one story entrance addition. Behind, the center section projects from the main building and has four tall columns rising to a wide pediment at the roof line. On the second story is a large arched window with narrow arched windows on each side. The building houses the County Circuit Court and the County Superior Court of the 9th Judicial District. 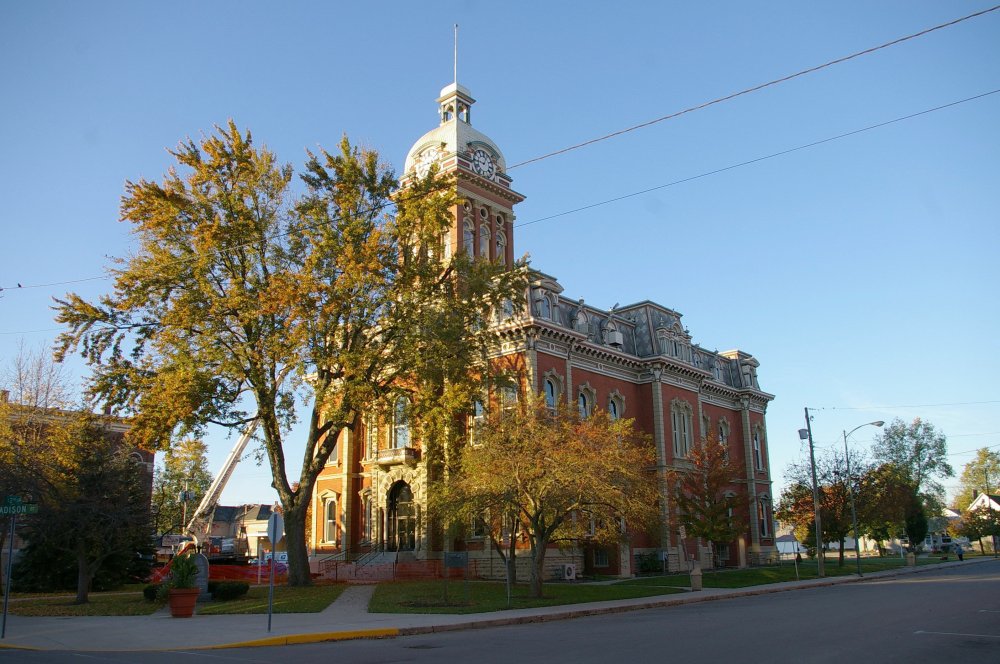 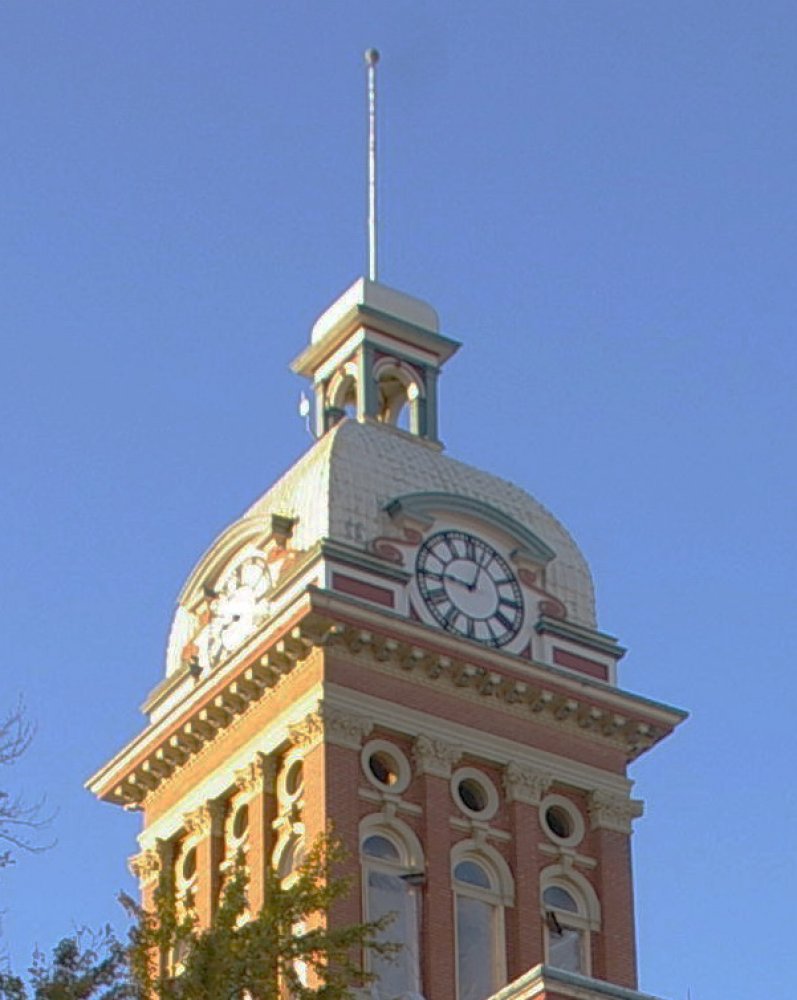 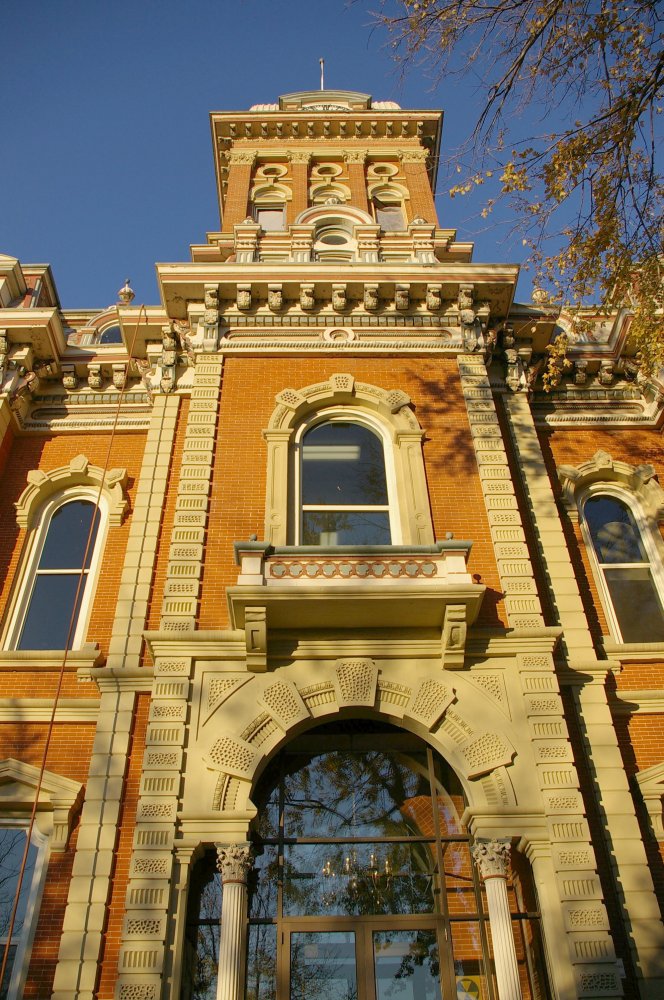 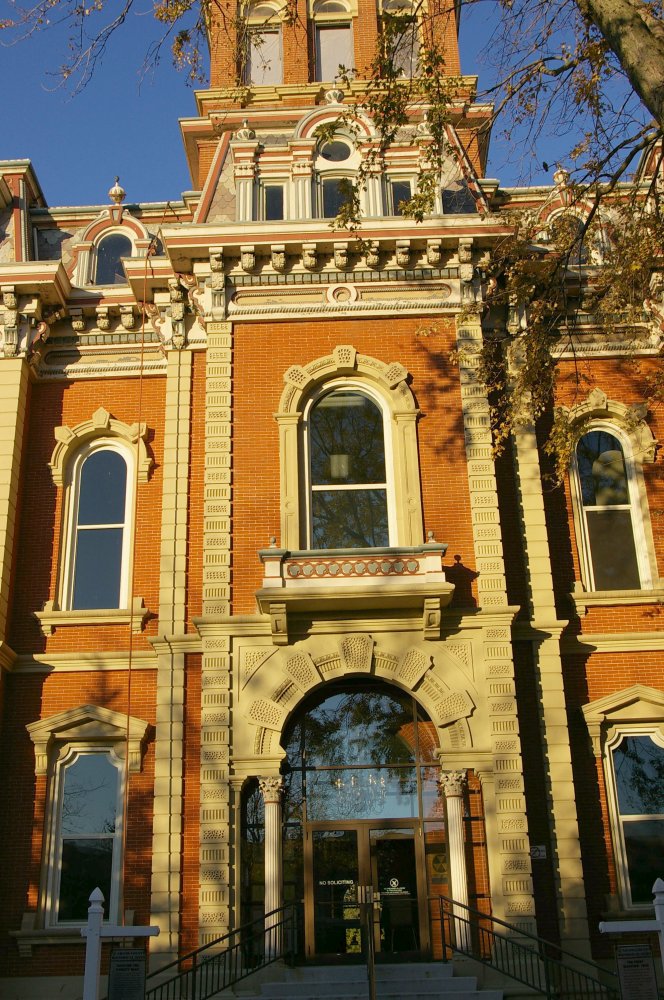 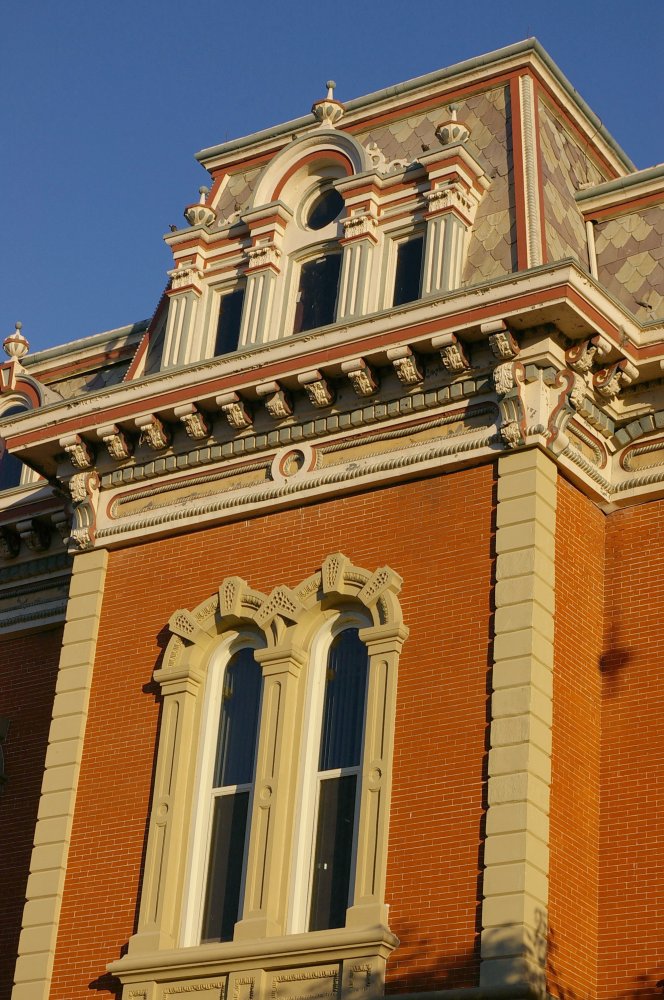 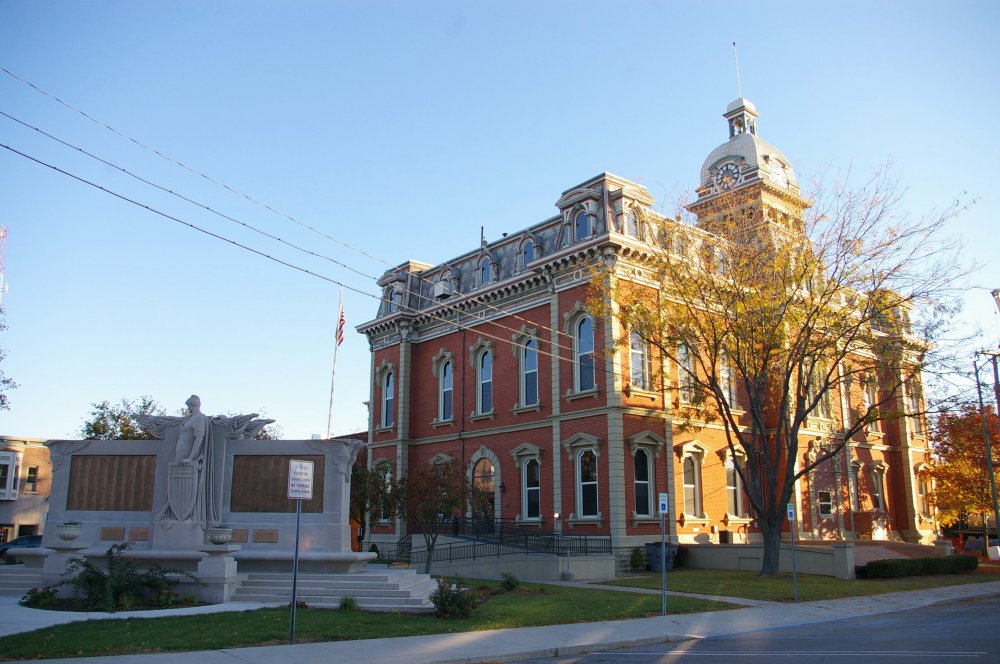 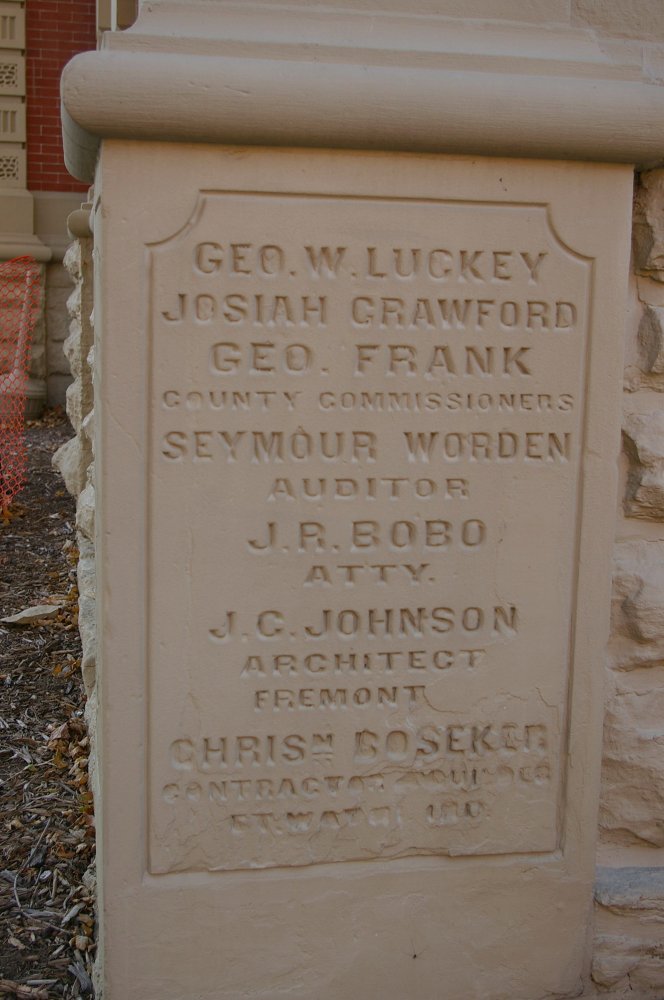 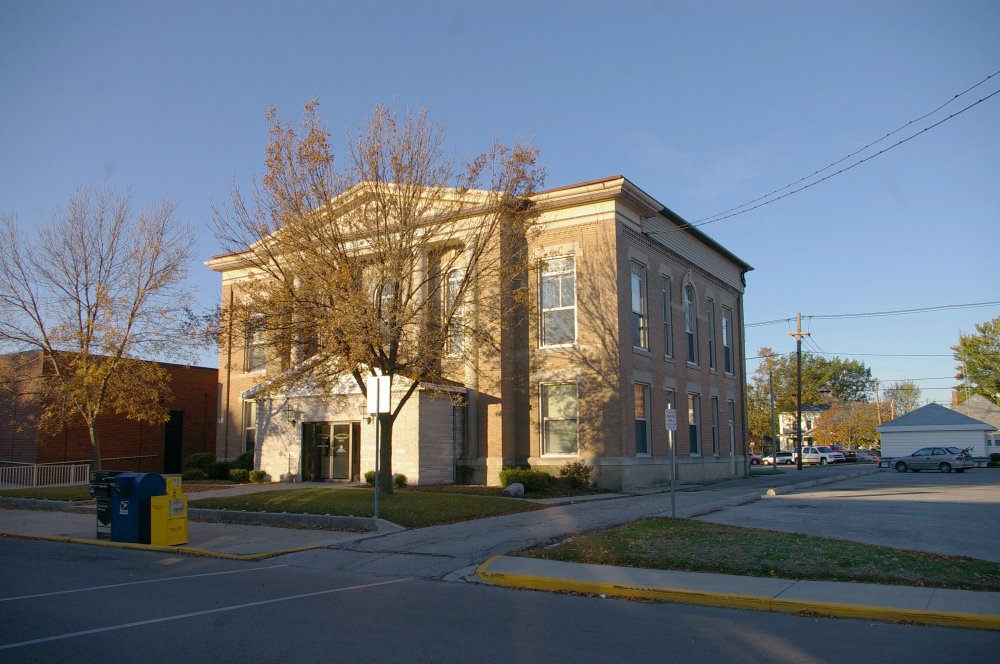 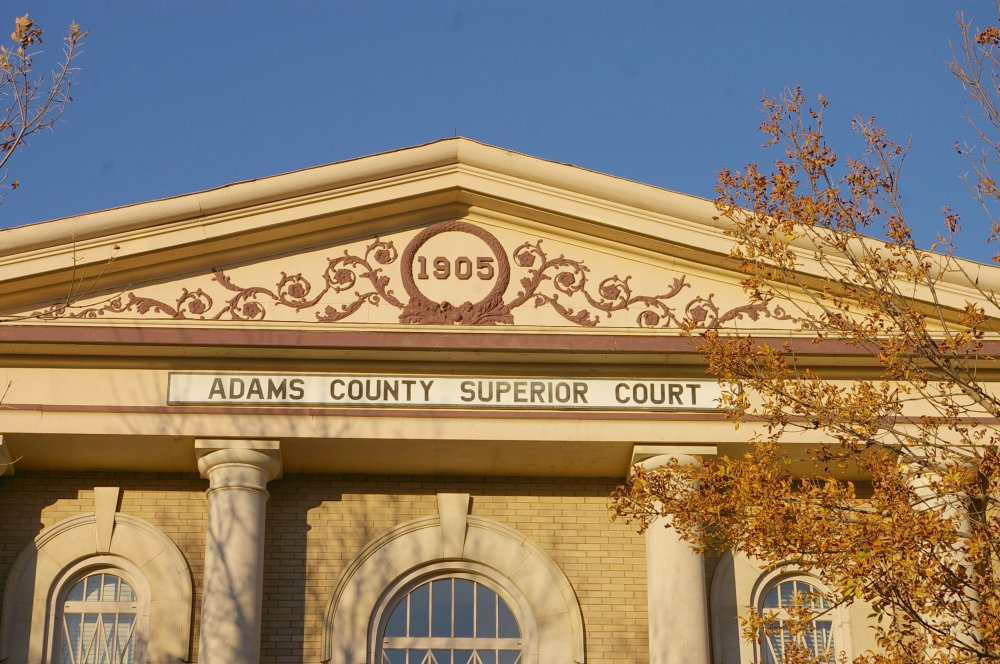