Bollinger County is named for George Frederick Bollinger, who was an early settler and legislator of Missouri. 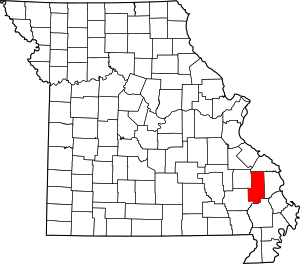 Description:  The building faces west and is a two story red colored brick and stone structure. The building is located on landscaped grounds in the center of Marble Hill. The west front has a central entrance on the first story. There are stone headers above the windows. The roof line forms a peak above the entrance. The roof is hipped. In the interior, the courtroom is located on the second story. The building houses the County Circuit Court of the 32nd Judicial Circuit. The superintendent was Jacob J Conrad. The building was enlarged in 1912. The contractor was Carmen and Smith.