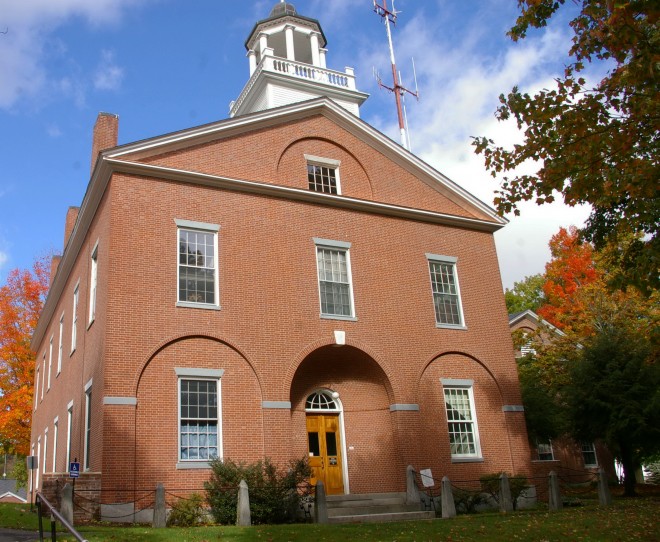 Lincoln County is named for the city of Lincoln in England, Great Britain.

Description:  The building faces west and is a two story white colored brick structure. The building is located on landscaped grounds in the center of Wiscasset to the south of the courthouse. The west front has a central recess entrance. There are green colored shutters. The roof is hipped. The building now houses the Wiscasset Public Library. The county offices were located there until the Lincoln County Courthouse was built in 1824.

Note:  The building was originally it was built to house the Lincoln & Kennebec Bank, and later the Wiscasset Bank and Mariner’s Bank. The bank vault was sited, underwater, in a deep well for protection. Originally a two story building with a mansard roof, it was an example of how commercial buildings were then built as houses. Later, it was used as a residence in 1862. In 1903, Andrew Carnegie came to this country as a passenger on the Wiscasset, a ship owned by Captain Johnston. He offered $4,000 to the town to erect a new library, but the Town couldn’t afford the money for its upkeep so the offer was not accepted. Frances Sortwell along with others founded the present library. Description:  The building faces east and is a three story white colored wood frame structure. The building is located on spacious landscaped grounds and was built within the stockade of Fort Shirley. The roof is hipped. The building is named as the Pownalsborough Courthouse and served as the courthouse from 1760 to 1794. Description:  The building faces north and is a two story white colored wood structure. The building is located in the center of Warren across from the Public Library. The entrance is at the west side of the north front. The windows have green colored shutters. The roof is hipped. The building served as the East Lincoln County courthouse  until 1847 and is now located in Knox County. The building housed the Warren Academy and later the Town Hall and is now used as The Village Laundry.

Note:  Warren became a shire town and the town was persuaded to build the courthouse which served until 1847. The building was sold to the town for $51.