Chambers County is named for Thomas Jefferson Chambers,  who was an early lawyer in Texas. 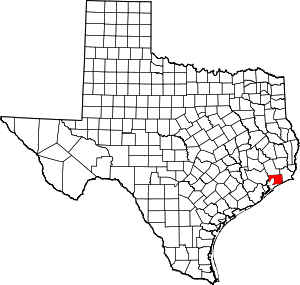 Description:  The building faces east and is a two story white colored porous stone and concrete structure. The rectangular shaped building is located on landscaped grounds in the center of Anahauc. The east front has three entrances with vertical piasters. On the north and south sides the building projects and there are lower wings with entrances. The roof line is flat. In the interior, there is marble wainscoting and Art Deco style chandeliers. The central staircase ascends to the second story and the courtroom which has Art Deco ornamentation and woodwork behind the judge’s bench. The building houses the State District Court, Constitutional County Court and County Justice Court. The construction was a Work Projects Administration project.

History:  The county was created in 1858 and Wallisville was selected as the county seat. The first courthouse was built in 1858 and burned in 1875. The schoolhouse built in 1869 and which is still standing in the Wallisville Heritage Park, served as the second courthouse until the third courthouse, a brick and stone structure was designed and constructed by August Baumbach at a cost of $7,376 in 1886 to 1887 ( demolished in 1948 ). The county seat was moved to Anahuac in 1908. The fourth courthouse was designed by A W Steinmar and constructed by W C Whitney in 1912 at a cost of $50,000. The courthouse burned in 1935 and was replaced by the fifth and present courthouse in 1936 at a cost of $276,000.