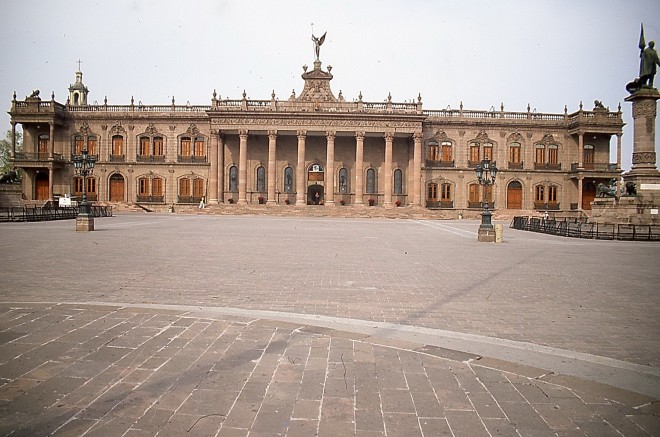 Description:  The building faces south and is a two story dark red coloured sandstone structure. The building is located at the north end of Macro Plaza in the centre of the city. The building is constructed of pink San Luis Potosi stone and faces south onto Espanada de los Heroes and Macro Plaza. The window facades predominate with half arches which combine with the central portico which has eight Corinthian columns along the south front. Along the roof line are many eagles and a balustrade. Over the portico is the Statue of Victory. There is an interior open courtyard. The Red Reception Room contains guns used in the execution of Emperor Maximillian, and is heavily corniced. The building contains the old Supreme Court Chamber. In the Plaza Cinco de Mayo is a statue of Benito Juarez. Description:  The building faces east and is comprised of a low eastern triangular  which  houses the State Congress (Honorable Congreso del Estado de Nuevo Leon) and a high tower on the west. The building is located on  Marco Plaza in the city centre. The Justice Palace is along the north side. The cement and glass complex faces east onto Marco Plaza with Avenida Ignacio Zaragoza running beneath the plaza. The lower part of the building is light grey cement with a triangular design with the main entrance along the northeast side. The The Salon des Sessiones has the podium on the east side, members seats in the centre and the public gallery on the west side. On the southwest rises the Torre Administrativa which has dark glass siding and houses the State Congress (Honorable Congreso del Estado de Nuevo Leon) offices on the fifth story.

Description:  The building faces east and is a glass and concrete structure. The building is located on Marco Plaza in the city centre. The Legislative Palace (Palacio Legislativo) is located on the south side. On the north side is a triangular low concrete building. On the south side rises a glass and concrete tower which has a recessed glass front on the east side. The entrance to both buildings is along the west side where stairs ascend to the second level entrance. The building houses the Superior Court of Justice   (Tribunal Superior de Justicia).