Uinta County is named for the Uinta Mountains which were named after the Uintah Native American Tribe. 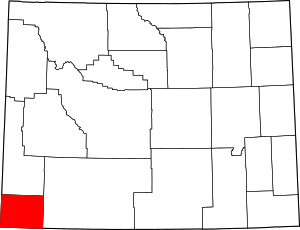 Description:  The building faces west and is a two story red colored brick, concrete and glass structure. The building is located on landscaped grounds in the center of Evanston. The west front has a high portico supported by two large Ionic sandstone columns rising to a pediment at the roof line. The entrance is arched with stone trim and has a semi-circular fanlight over the front entrance. The roof is hipped and covered with ceramic tiles. The interior has a central stair hall, with offices flanking both sides. Ceiling and wall surfaces are pressed metal and plaster. The building houses the County District Court and County Circuit Court of the 3rd Judicial District. The jail was completed in 1873 and formed part of the courthouse built in 1873 to 1874. In 1887, a new jail was built by the Pauly Jail Building and Manufacturing Company of St. Louis. The jail portion of the courthouse was then converted into office space and a storage area. A building between the two was the jailer’s residence. The two story west Georgian Revival section was added in 1910. The architect was G A Graves and the contractor was W H Armstrong. In 1984 the north and south glass walled additions were constructed. The architect was Cornwall, Evans & Fife and the contractor was Overthrust Constructors, Inc.

Note:  The courthouse is the oldest courthouse in Wyoming still used as a courthouse. The second oldest courthouse is located in Johnson County, The contract for construction was awarded to Evanston residents Harvey Booth and William McDonald, the latter being also chairman of the four-man Board of County Commissioners. The jail was constructed first. William Durnford was the mason in charge of all brickwork and Thomas Widdop, also a brick mason, assisted in the construction. A man named McCook held the contract for carpentry work, and James Baguley, a skilled woodworker recently arrived from England, completed the interior work.