Pepin County is named for Pierre Pepin and Jean Pepin, of Chardon, who were explorers of the region. 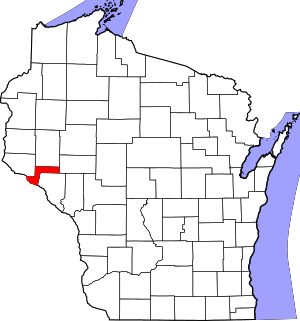 Description:  The building faces west and is a two story buff colored brick and concrete structure. The building was remodeled in 1983 after it was used as a hospital and nursing home. The building sits on spacious landscaped grounds at the top of a hill to the south of the center of Durand. Along the west side are two porticos at the two entrances. The roof line is flat. In the interior, the courtroom is located on the second story. The building houses the County Circuit Court of the 9th Judicial Circuit. The building is names as the Pepin County Government Center.

Note:  The building was sold to the City of Durand in 1971 and in 1972 and Pepin County purchased a 30 percent interest in the property. The hospital continued to operate until the early 1980s. In 1983, the City of Durand deeded interests in the former hospital to the county for the new government center which opened in 1984. In the late 1990s a significant addition expanded the jail and law center. Note:  The building is the only remaining wood frame courthouse in Wisconsin and is the oldesrt courthouse not in use as a courthouse. .