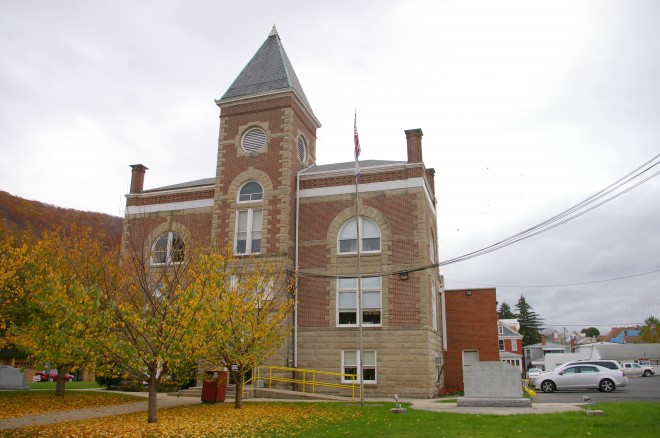 Mineral County is named for the mineral resources of coal in the region. 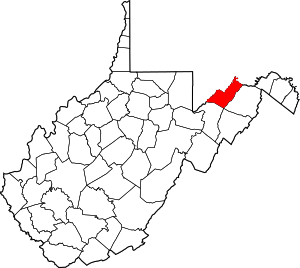 Contractor:  I B Walton

Description:  The building faces northeast and is a two story red colored brick and stone structure. The building is located on landscaped grounds in the center of Keyser. The northeast front has a central tower rising from the entrance with large arched window on the third story and with circular opening above and steep pointed roof. The base of the building is course stone. There is stone trim. The roof is hipped. In the interior, the courtroom, along with the judges chambers and law library, are situated to the rear of the second story. The courtroom displays a low-pitched gable ceiling with exposed rafters, decorative brackets, new acoustical tiles, and suspended fluorescent lighting. The mahogany judges bench is situated to along the southeast wall of the room accented with large mahogany panels. Flanking the bench is a pair of pilasters topped with a decorative cornice. Jury seating is situated in the south corner of the room. A solid wood bannister separates the court area from the gallery which contains four rows of bench seating. In the 1940s a balcony overlooking the courtroom was closed off and made into office space. The building houses the County Circuit Court of the 21st Judicial Circuit. In 1894 to 1895, the northeast front was remodeled to the current facade. The architect was Edward B Franzheim and Millard F Geisey of Wheeling and the contractor was E J Fredlock. On the south side are low red colored brick additions constructed. In 1938 and 1941 to provide additional county office space. The contractor was J Paul Blundon. Additions of red colored brick were constructed in 1955 on the east and west sides..

Note:  In 1866 the County Board of Supervisors appointed Thomas R. Carskadon, H D Davis and S W Downey to a committee to advertise a proposal to construct a courthouse and jail. The builder was to either construct the courthouse based on plans provided by architect E G Lind of Baltimore or provide new plans. Ultimately a new and modest design by C G Sims was chosen and the contract to build the courthouse was awarded to I B Walton (some sources suggest that Lind’s plans were used). Description:  The building faces southeast and is a two story yellow colored brick and concrete structure. The building is located on landscaped grounds in the center of Keyser on the southwest side of the courthouse. On the southeast side, a long canopy extends from the top of the first story. The roof is sloped. The building houses the County Magistrates Court and the County Family Court.

History:  The county was created in 1866 and Keyser was selected as the county seat. The first and present courthouse was constructed in 1967 to 1868.