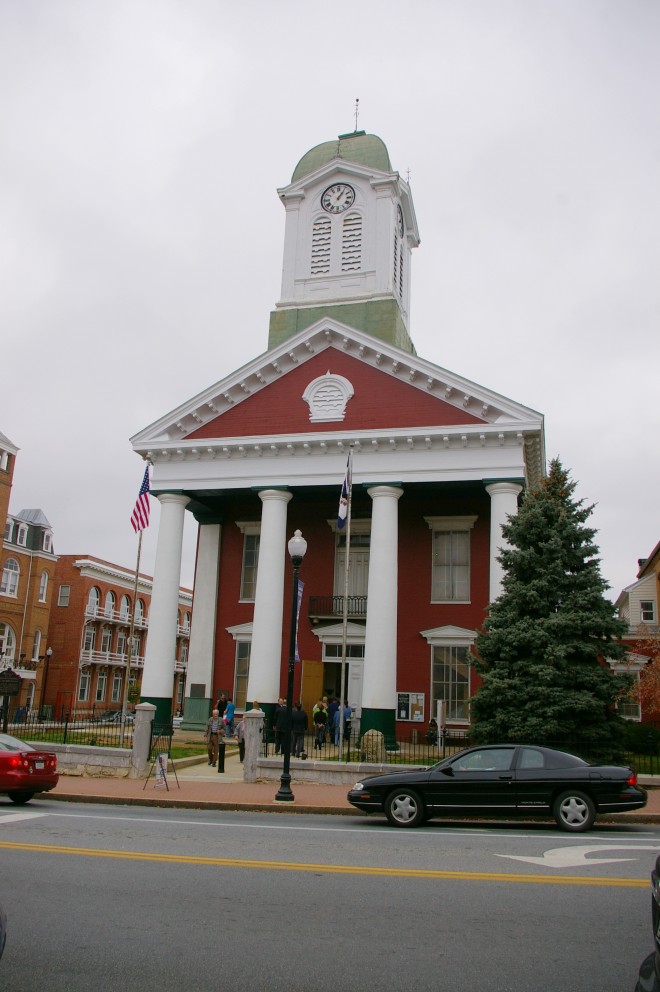 Description:  The building faces south and is a two story red colored brick and wood structure. The building is located in the center of Charles Town. The south front has a large portico with four large white Grecian Doric columns rising to a pediment at the gabled roof. Above the portico is a large square wood cupola with clock and green colored dome at the top. In the interior of the courtroom, the railing which divides the room into several parts, including the railing for the judge’s bench, has both a bottom and top rail with turned balusters. The balusters of the two interior stairways are turned throughout the entire length. The main courtroom is located on the second story. The building was restored in 1871 to 1872. The contractor was Phillips and Cockrill for the wood work, Jacob Tutwiler for the stone and brick work, C Frank Gallaher for plaster work, McCurdy & Duke for the roof work, William Kimes for painting work and John E Hilbert for the fire-proof vaults. In 1910, an addition was constructed at the rear of the building for judge’s chambers, jury and witness rooms. The architect was Mullet & Company. In 1919 the old jail was sold to the Post Office, and a new building was constructed on the north side to house the jail. The old jail section now houses the County Circuit Court of the 23rd Judicial Circuit and County Family Court.

Note:  Following John Brown’s three-day occupation of the US Armory and Arsenal at Harpers Ferry in 1859, he was captured and charged for “conspiring with slaves to commit treason and murder.” At the conclusion of his trial at the courthouse, Brown was found guilty of murder and treason and later hanged just several blocks away. Description:  The building faces east and is a three story red colored brick, wood and concrete structure. The building is located in the center of Charles Town on the west side of the courthouse. The east front has a central entrance on the first story with arched window above. There is a balcony on the second and third stories. The wide windows are arched. The roof line is flat. The building houses the County Magistrate Court. The building is called the Margaret’s Building after the builder’s daughter. The building was acquired by First Charles Town Group, Inc. remodeled in 1997 to 1999 to accommodate the County Judicial Center. The architect was Helbing Lipp Ltd.

Description:  The building faces south and is a two story white colored brick and wood structure. The building is located on landscaped grounds in the center of Shepherdstown. The south front has a large portico with four white columns rising to a pediment at the roof line. There are dark green colored louvered shutters on the windows. On the roof is a large white colored clock tower with hexagonal cupola at the top. The roof id hipped. The building was named as McMurran Hall in memory of Joseph McMurran, first principal of Shepherd University which leased the building in 1872.

Note:  The building was intended to be the Shepherdstown Town Hall. In 1866, the county seat was moved here during the Civil War and wings were added.

Note:  The lowest point in West Virginia is the Potomac River near Harpers Ferry at 240 feet ( 73 meters )  which is located in the county.