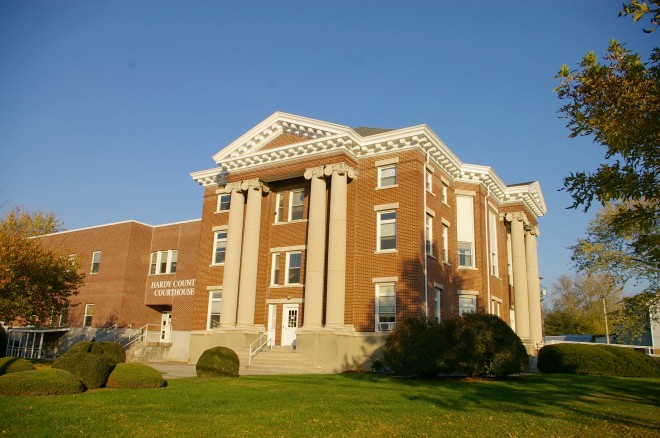 Hardy County is named for Samuel Hardy, who was a member of the Continental Congress.

Description:  The building faces south and is a three story red colored brick and concrete structure. The building is located on landscaped grounds in the center of Moorfield. The south front and west side have four columns rising to a pediment at the roof line with a bell at the pediment on the south side. The eave projects from the building along the roof line. In the interior is a hand-carved, wooden seal of West Virginia made by local citizen, Eddie Simpson, was installed in June of 2013. The building houses the County Circuit Court of the 22nd Judicial Circuit, County Magistrate Court and County Family Court. On the north side is a new addition constructed in 1984 to 1985. The architect was Grandee, Thomas and Sprouse of Charleston.

Description:  The building faces east and is a two story white colored clap-board structure. The building is located on landscaped grounds in the center of Moorfield to the southwest of the courthouse. The north section is a rectangular shape wing narrow white colored octagonal cupola at the east side of the hipped roof. The former courtroom was located on the second story. Built in 1833, the south section of the “L:” building is also rectangular with a hipped roof and small portico along the east side. This section was occupied by the clerk’s office. Brickwork was of Flemish bond, and a carved and bracketed cornice underlined the roof’s edge. The building served as the courthouse until the 1859 courthouse was constructed.

Note:  The lower level of the north section of the courthouse was open so that horses could be taken through the arched, brick passageway into the open courtyard to the back.

Description:  The building faces east and is a two story red colored brick structure. The building is located in the center of Moorfield to the southwest of the courthouse. The east front now has store fronts on the first story. The roof line is flat. The plans were drawn by William A Pratt.

Note:  During the Civil War, the court was only convened once at the home of John Mathias on May 2, 1864. This log cabin also still stands and is located at 13394 Highway 259 at Howard’s Lick Road in Mathias to the southeast of Moorefield. The building has been restored. After the interruption of the War, courthouse functions were returned to the South Main Street location.

History:  Before the county was created in 1785, the court met in rented residences. The county was created in 1785 and Moorefield was selected as the county seat in 1786. The first county officers met at the home of William Bullitt in 1786 and the first courthouse, a one story log cabin, was built in the same year. The second courthouse was a two story frame structure built by Able Seymour in 1792 to 1793 at a cost of 150 pounds and is still standing at 101 Winchester Avenue. The third courthouse was constructed in 1859 to 1860 and is still standing at 118 South Main Street. The fourth and present courthouse was constructed in 1911 to 1914. 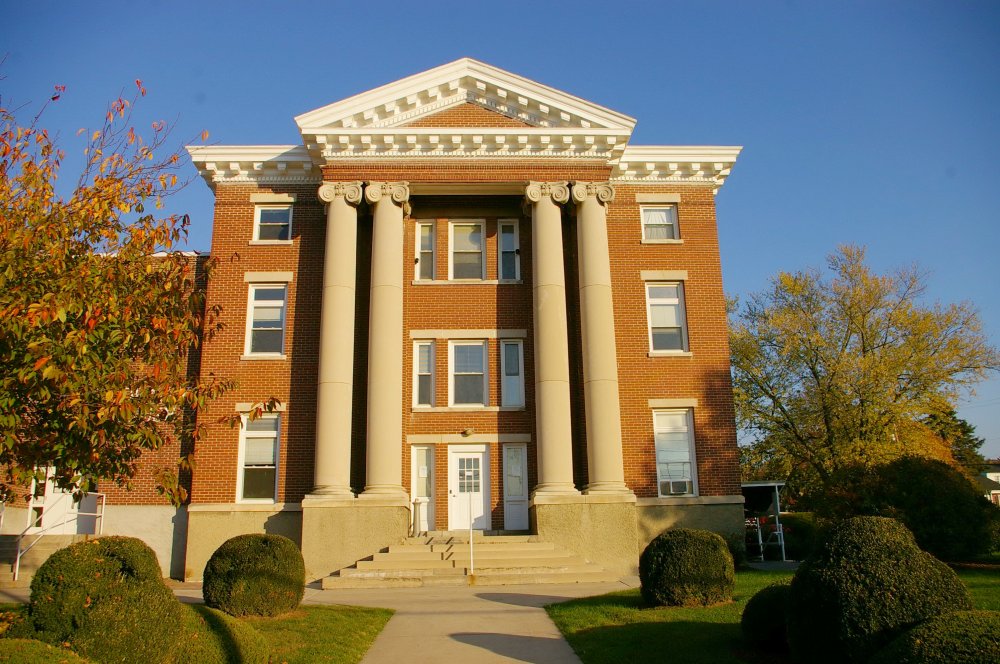 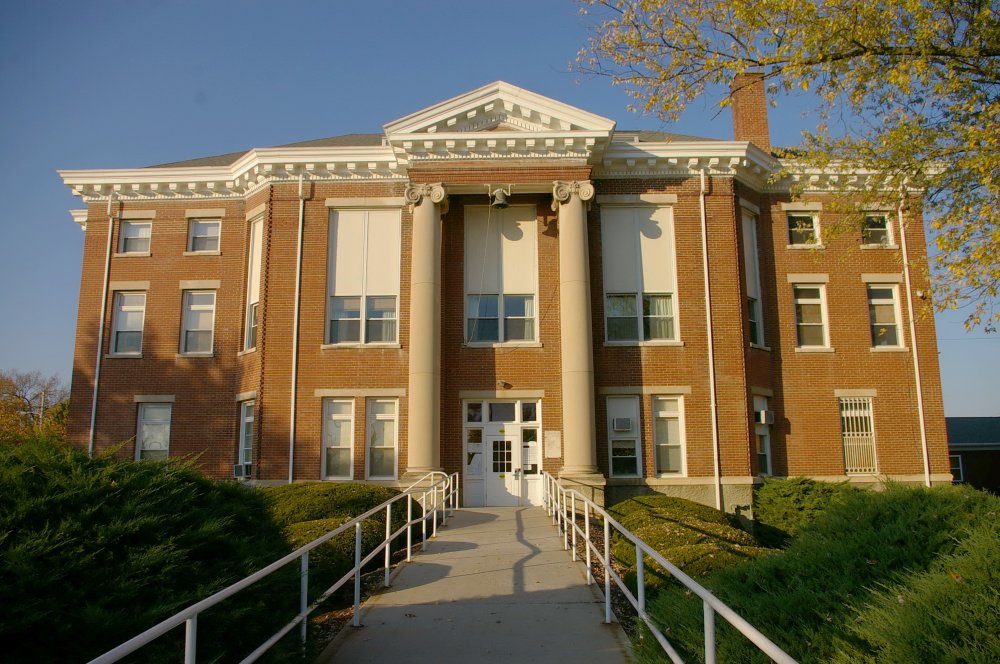 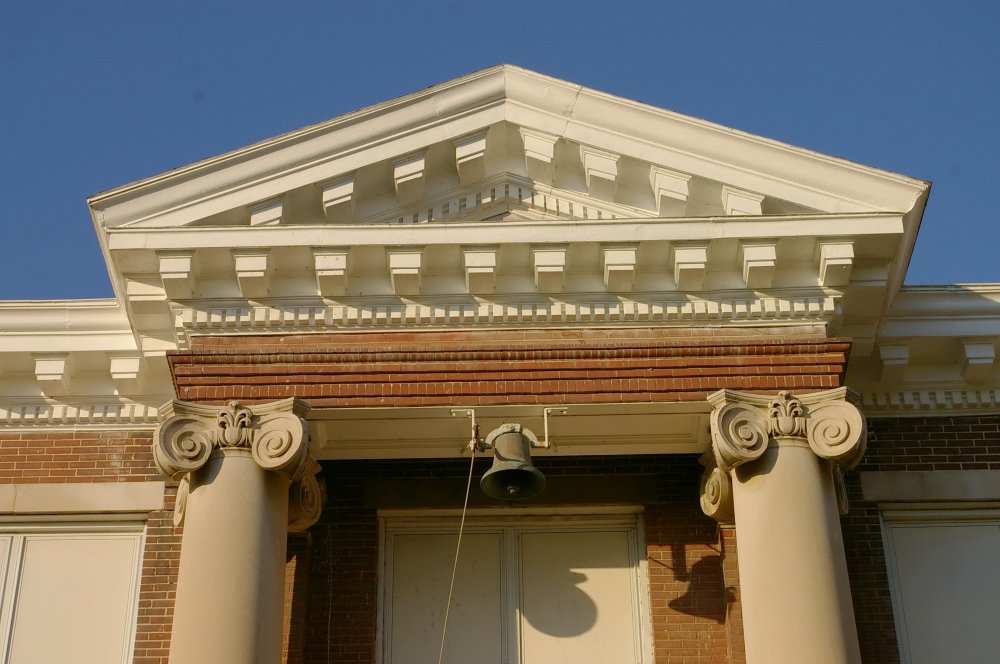 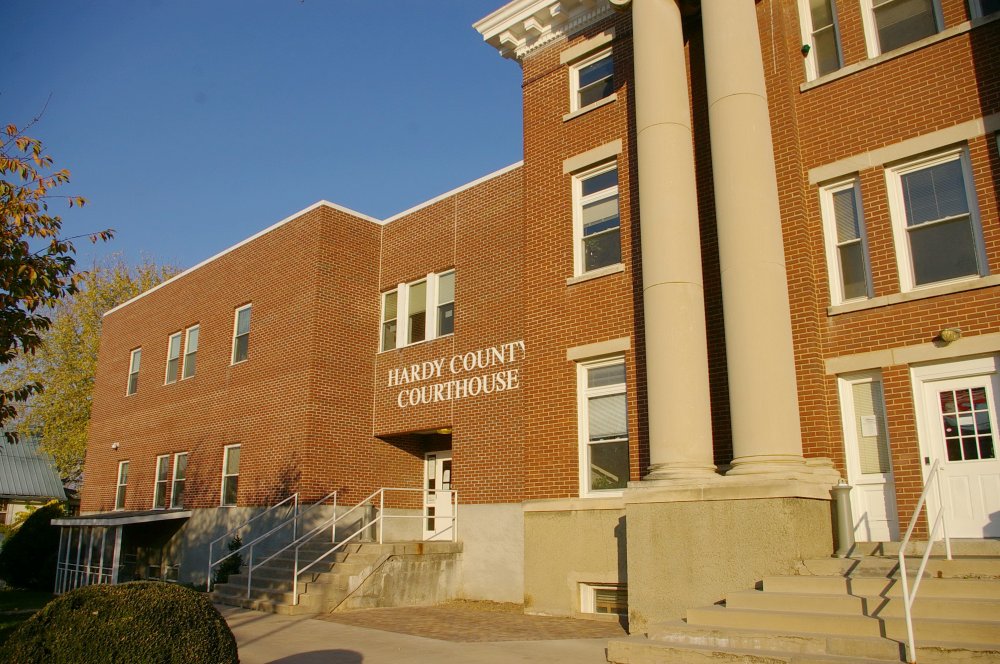 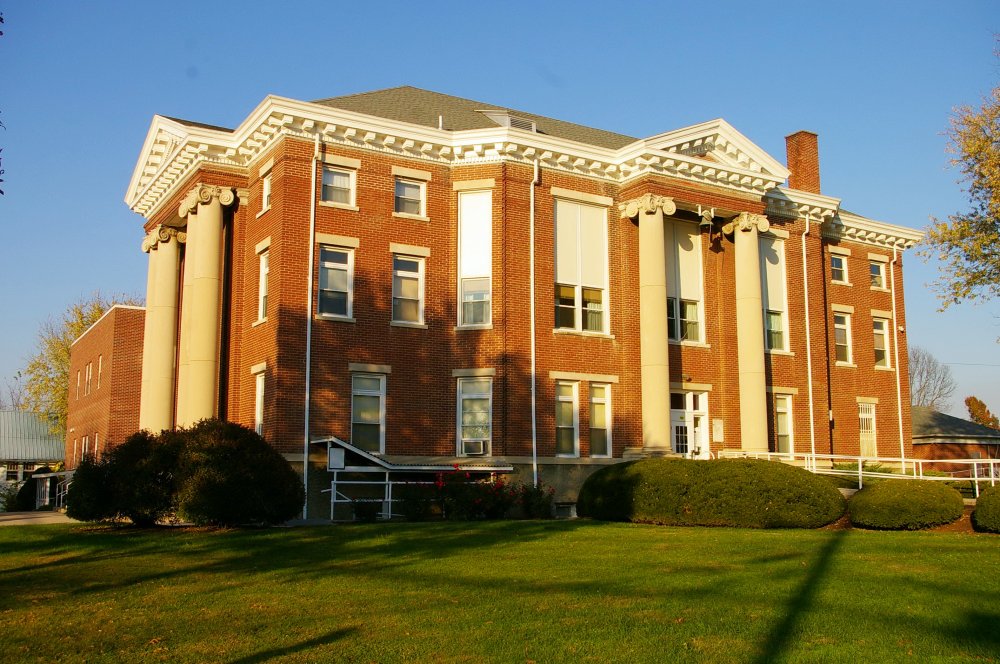 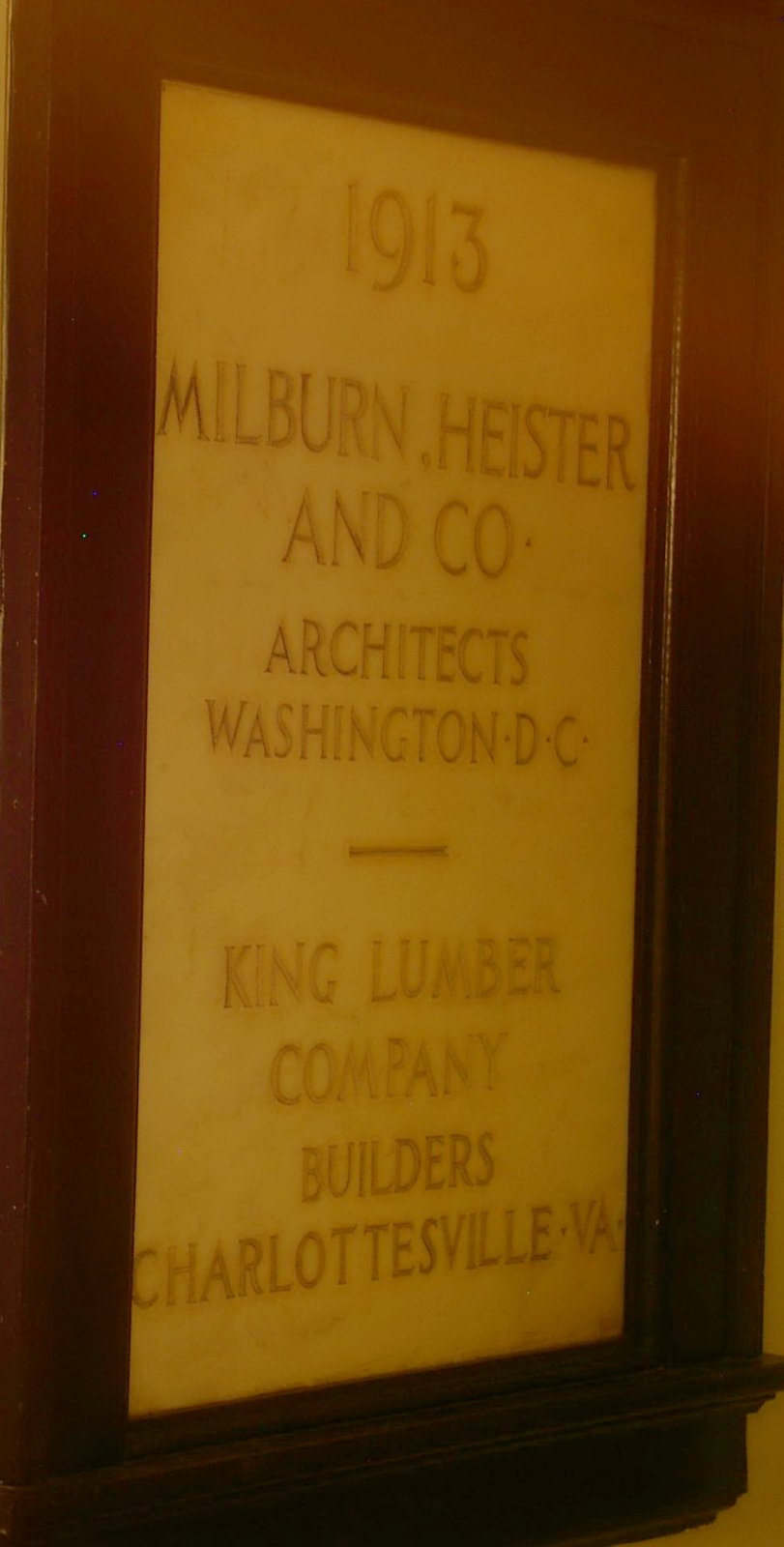 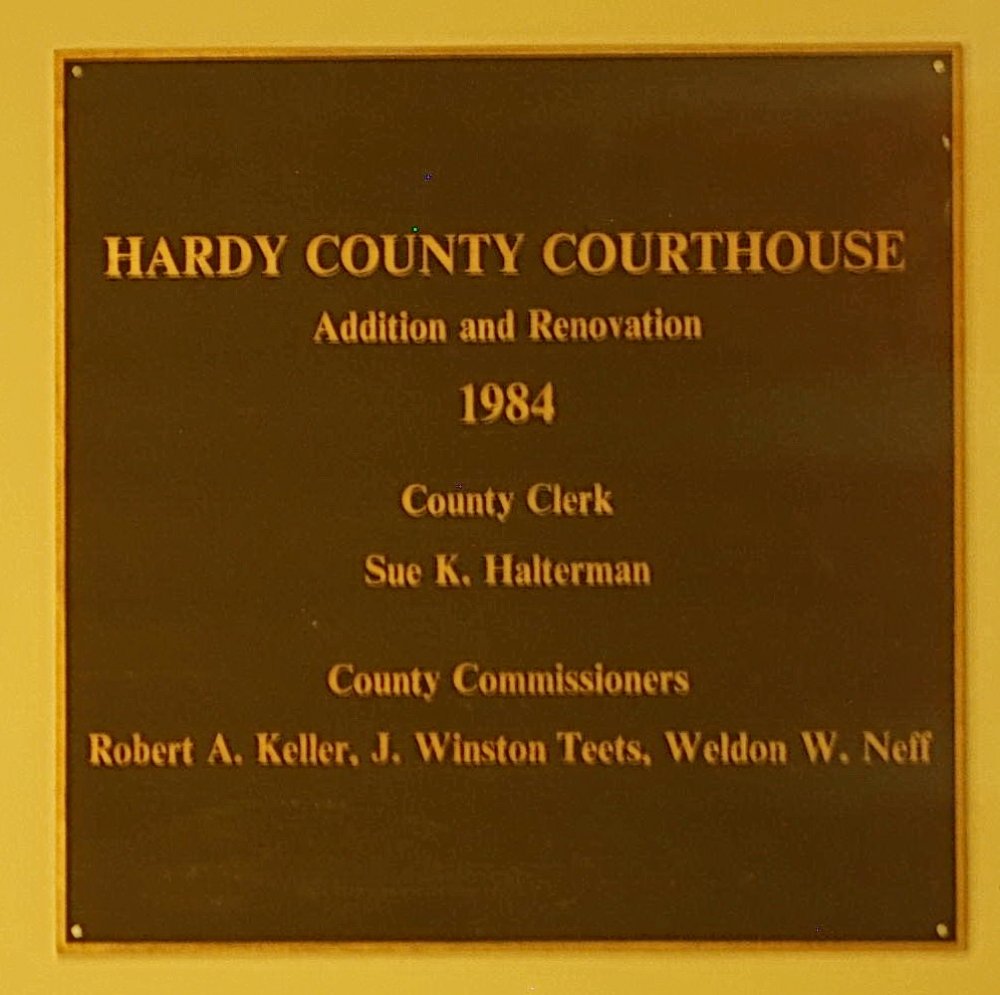