Walla Walla County is named for the Walla Walla Native American Tribe who resided in the area. 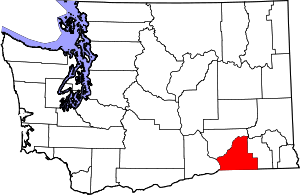 Description:  The building  faces northwest and is a two story gray Indiana limestone  structure. The building is located on landscaped grounds in the center of Walla Walla. The northwest front has a large portico with two columns rising to the top of the second story and with a large header above which rises above the roof line. A balustrade runs along the roof line. In the interior, the marble staircase rises to the second story and continues halfway to the third story before separating, turning back and continuing on to the third story where the two courtrooms are located. On the south side is the red colored brick County Jail built in 1906. In 1982, a new jail was constructed behind the courthouse. On the north side is the Hall of Records built in 1891. Description:  The building  faces northeast and is a two story stone, glass and concrete structure. The building is located in the center of Walla Walla on the west side of the courthouse. Description:  The building  faces north and is located on landscaped grounds to the north of the courthouse in the center of Walla Walla.