Snohomish County is named for the Snohomish Native American tribe, referred to as the “lowland people”. 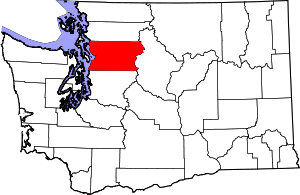 Description:  The building  faces west and is a two story stucco, concrete and wood structure. The building is located on landscaped grounds.in the city center and retains three arches from the previous courthouse that burned. On the west center rises a high clock tower. There are arched windows along the second story. The building has a red colored tile roof. In 1953, a wing was added on the north side and the south side.

Note:  On February 1, 1898, a three story brick and stone Chateauesque style courthouse was completed. In 1908, a two story brick annex was constructed on the north end of the courthouse. Sparks from a fire which originated in a carriage and wheel factory directly across from the site on Wetmore Avenue spread to the courthouse roof on August 2, 1909, and in the ensuing destruction the annex was all that could be saved. County government functioned in the annex until a new building was erected upon the foundations of the old courthouse. August F Heide of Siebrand & Heide who had designed the old courthouse was hired as architect for the building of the present courthouse. Note:  A five story addition is under construction from 2018 to 2020 on the northeast side. The courthouse is being refurbished . The architect is Heery International of Atlanta and Hoffman Construction Company of Seattle.