Pend Oreille County is named for the Pend Oreille Native American tribe, who were named by the French for “earring” or “hangs in the ear”. 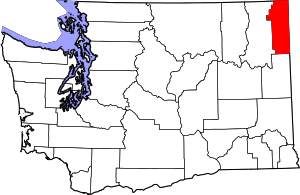 Description:  The building  faces north and is a two story buff colored brick and concrete rectangular structure. The building is located on landscaped grounds in the center of Newport and has a recessed entrance in the center of the north side. A projecting cornice runs below the roof line. The building houses the County Administration. The building was renovated in 1992. The architect was Zeck Butler and the contractor was Walker Construction Company of Spokane. On the south side is the County Jail built in 1940. Description:  The building  faces north and is a one story red colored brick, glass and concrete structure. The is located on spacious landscaped grounds on the west side of the center of Newport. The building is triangular in shape. The windows are horizontal with a wide concrete band along the flat roof line. The building houses the County Superior Court and the County District Court. The building was named in 1996 as the James P McNally Hall of Justice.