Garfield County is named for James Abram Garfield, who was the twentieth President of the United States of America. 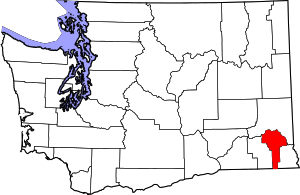 Description:  The building  faces south and is a two story white colored brick and stone structure. The building is located on landscaped grounds in the center of Pomeroy. The central entrance projects from the main building and rises one story with a balcony on the second story. On the east side of the entrance is a large square tower rising three stories to a clock and having a statue of Justice at the top of the domed roof. On the west side is a three sided tower rising three stories with a steep roof. The courtroom is located on the second story. The building was restored from 2009 to 2011. The architect was Miller Hayashi of Seattle and Cardwell Architects. Courtroom in 2009 before restoration