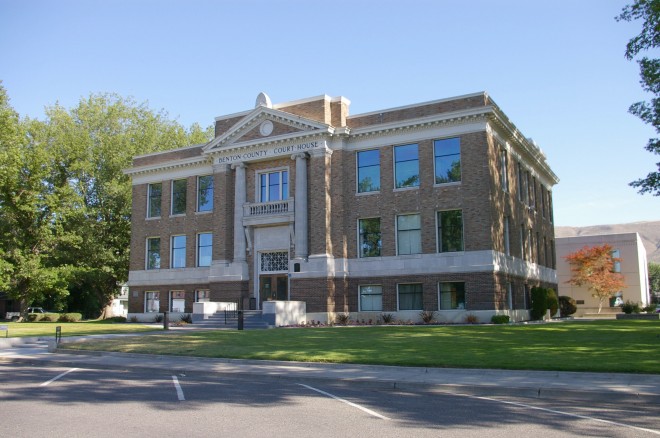 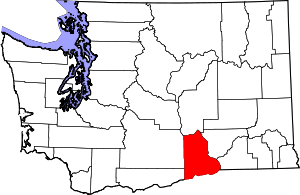 Description:  The building  faces north and is a three story brown colored brick, terra cotta and concrete structure. The building is located on landscaped grounds in the center of Prosser. The north front has a large portico with two columns rising to the top of the second story, with a pediment above. The concrete foundation is covered with grey colored stucco. A wide horizontal white colored band runs below the first story windows and above the second story windows. A cornice runs below the roof line. The roof line is flat. Decorative features in the interior include terrazo flooring, oak banisters, doors, window and door surrounds; and moulded, plastered cornices. An addition was constructed on the south sided in 1987. The architect was Ohashi-Augier Architects of Richland and the contractor was Lydig Construction Inc.

History:  The county was created in 1905 and Prosser was selected as the county seat. The first courthouse in 1905 was the Riverside Hotel built in 1887. From 1907 to 1919 the county occupied offices in the Viles Block on Seventh Street. The second courthouse was built in 1905. The cost of construction of the third and present courthouse in 1926 to 1927 was $87,000. The bid of Ernst White & Company of Twin Falls, Idaho was $75,321. George Rasque of Wisconsin headed the construction project. 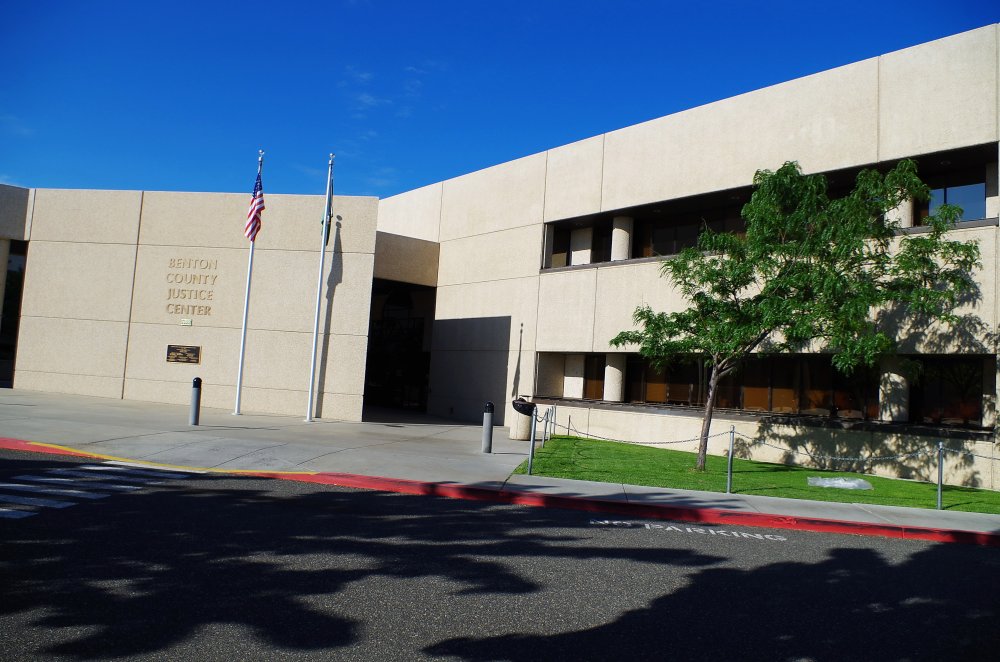 Architect:  Ohashi-Augier Architects and Planners of Richland and Hummel Architects of Boise, Idaho

Description:  The building  faces east and is a two story cream colored concrete and glass structure. The building is located on spacious grounds on the northwest side of the Justice Center Complex in Kennewick. The east front has a high concrete wall with recessed entrance on the east side. The windows are horizontal and recessed. The roof line is flat. The building houses the District Court for Benton County and Franklin County. 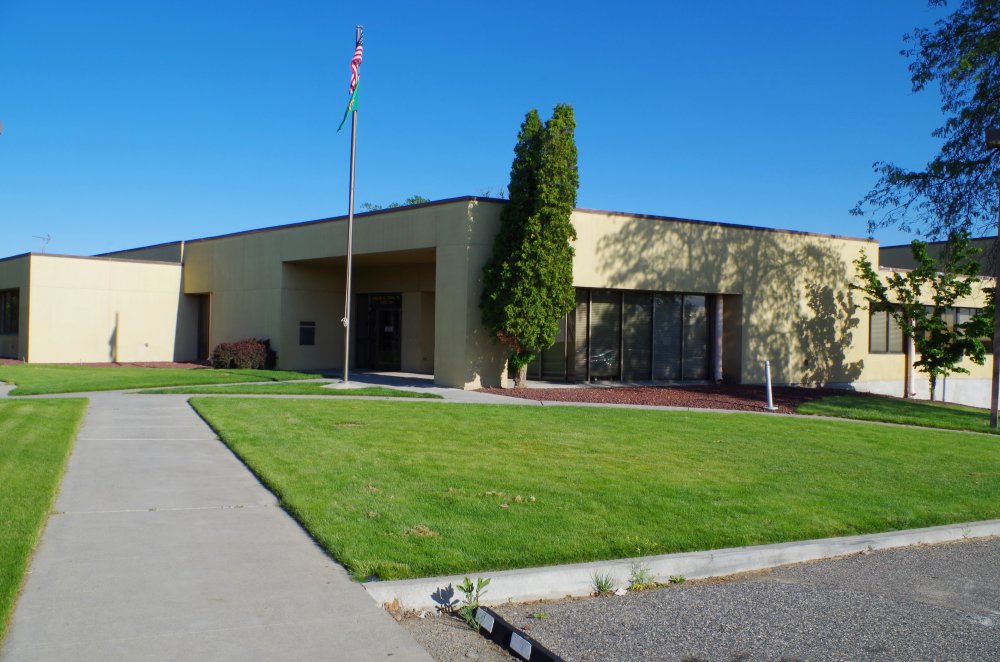 Description:  The building  faces south and is a one story buff colored concrete structure. The building is located on landscaped grounds in Kennewick and is “U” shaped. The recessed entrance is located at the southeast corner. The windows are horizontal and the roof line is flat. The building is named for James J Lawlass and serves Benton County and Franklin County. 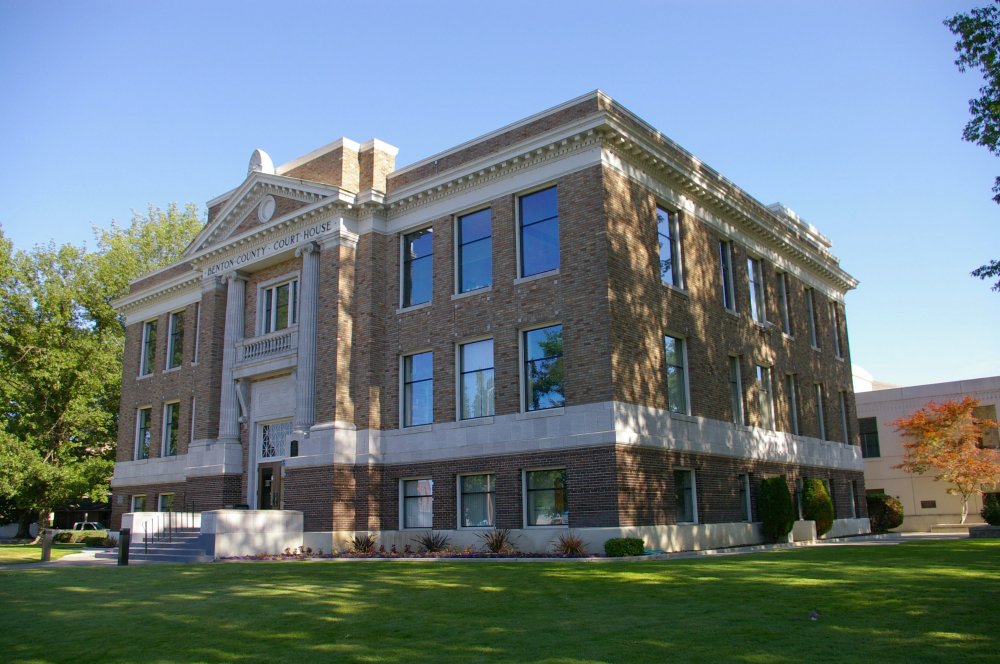 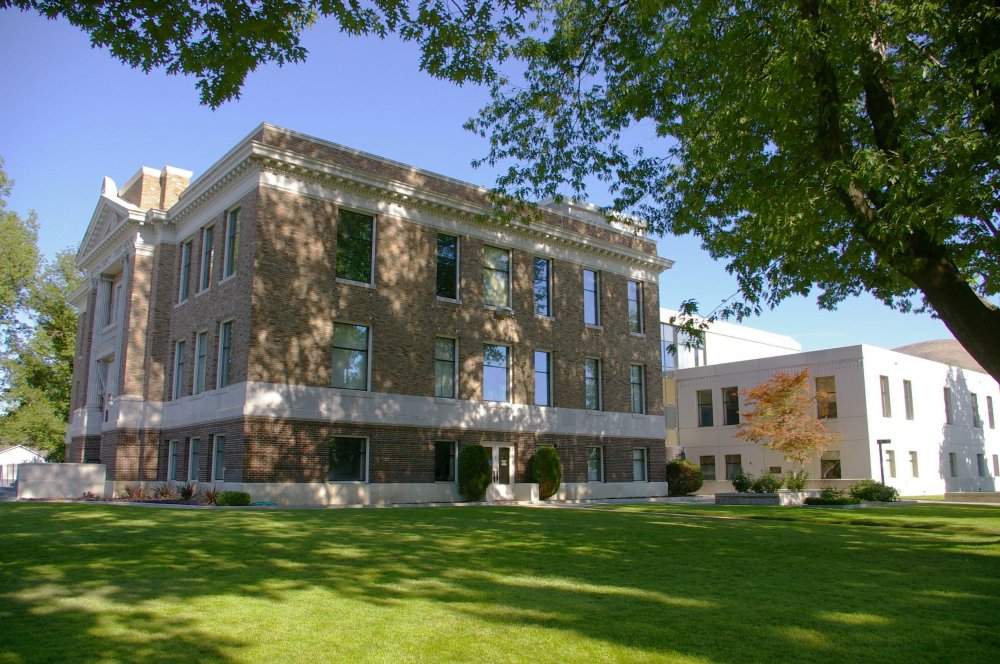 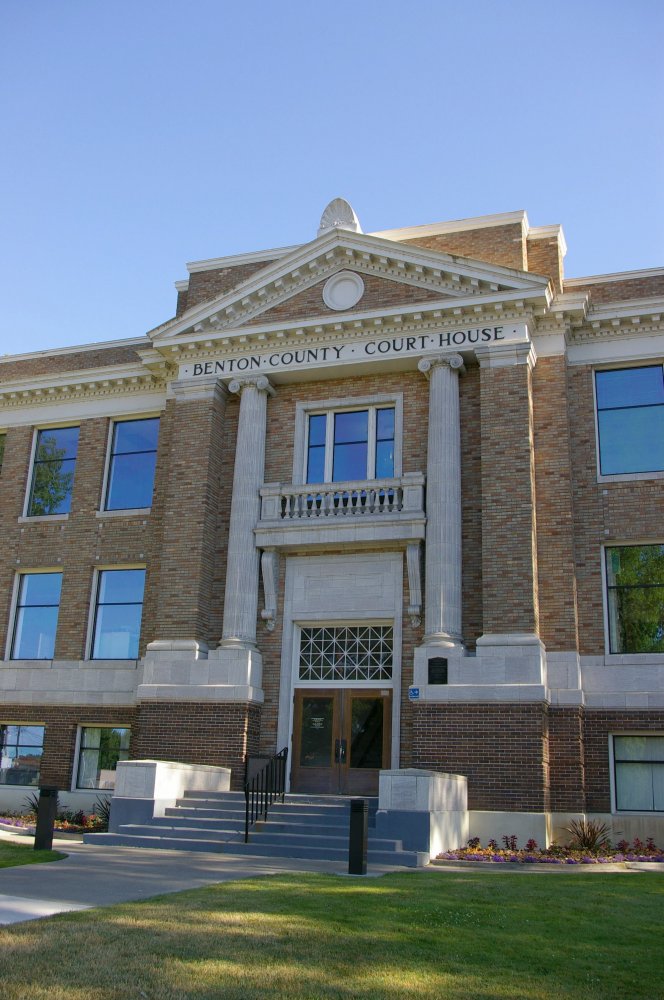 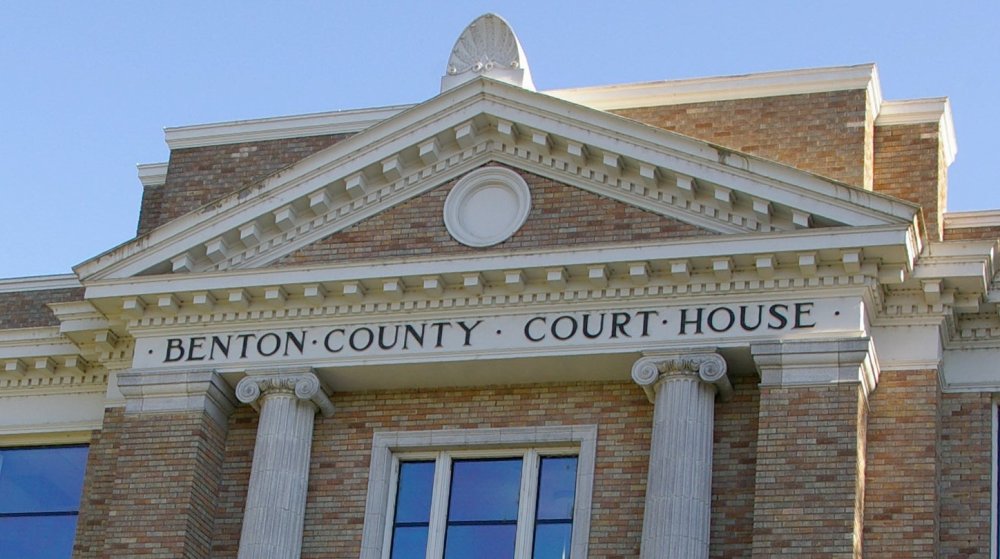 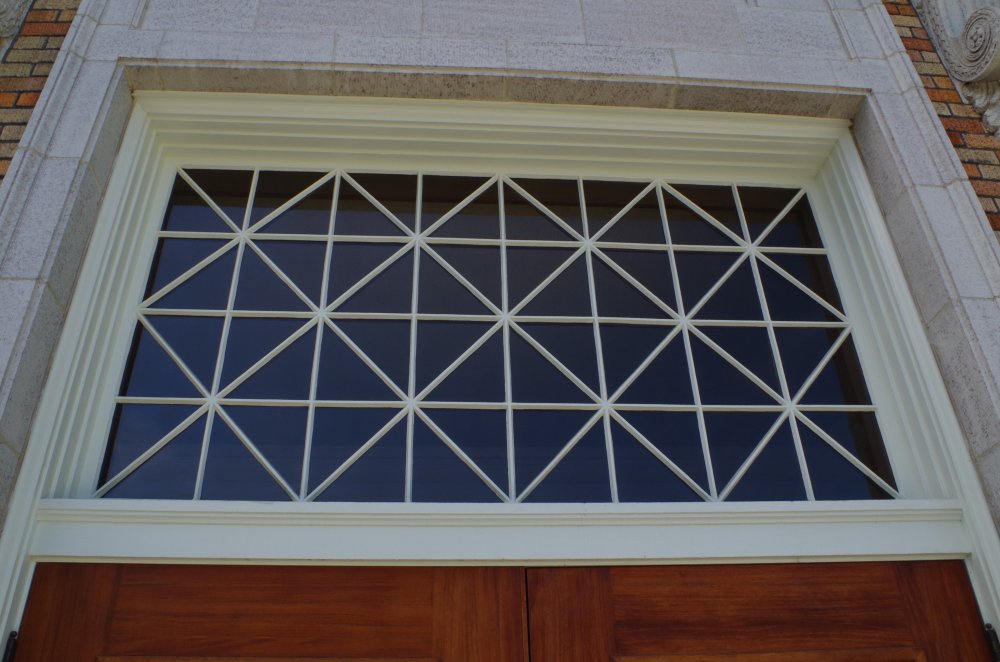 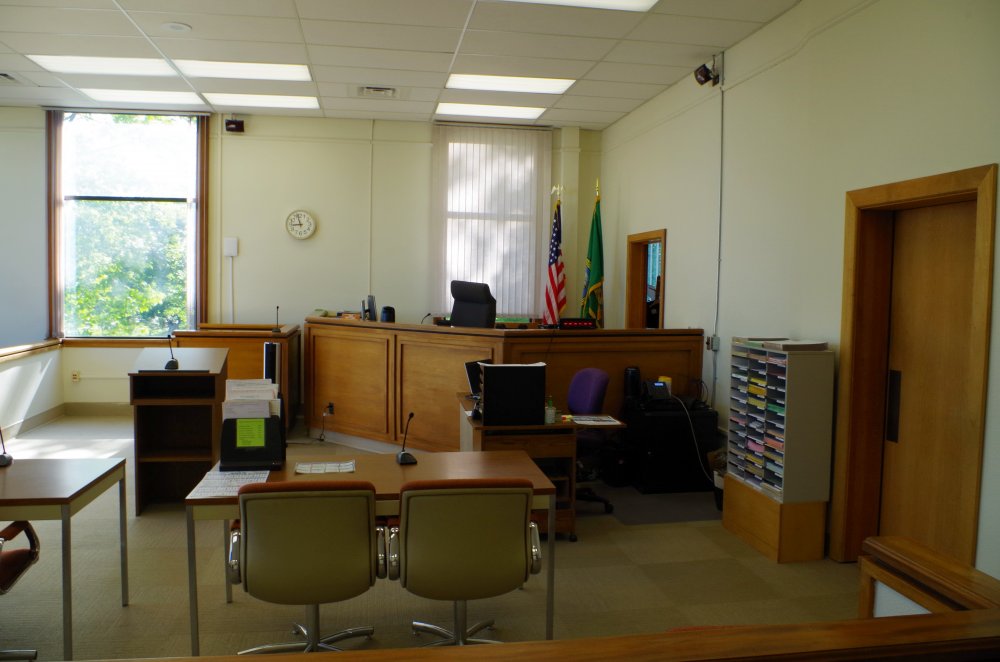 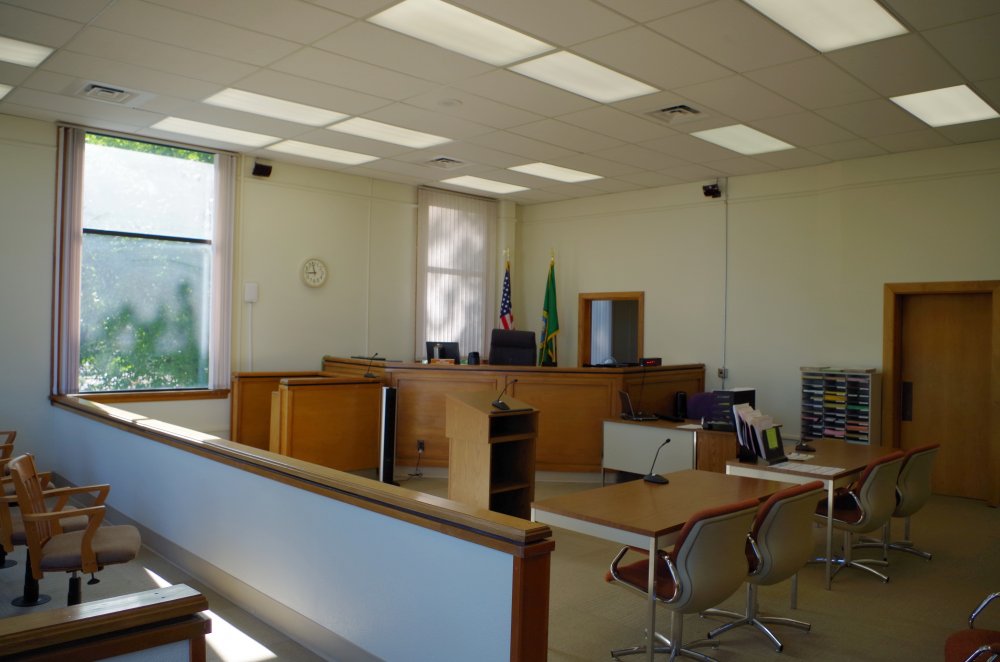 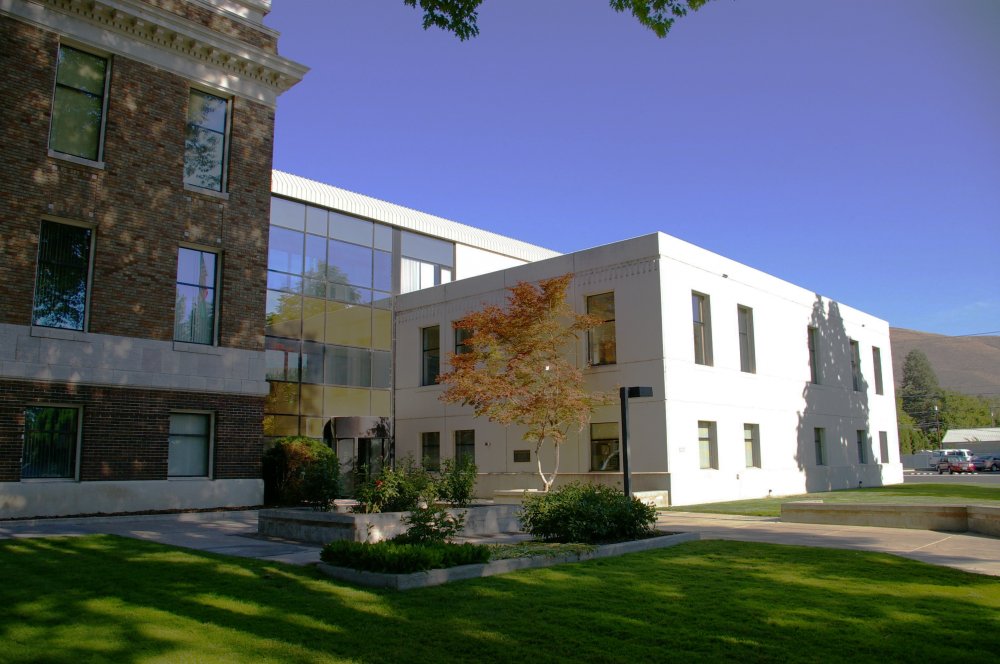