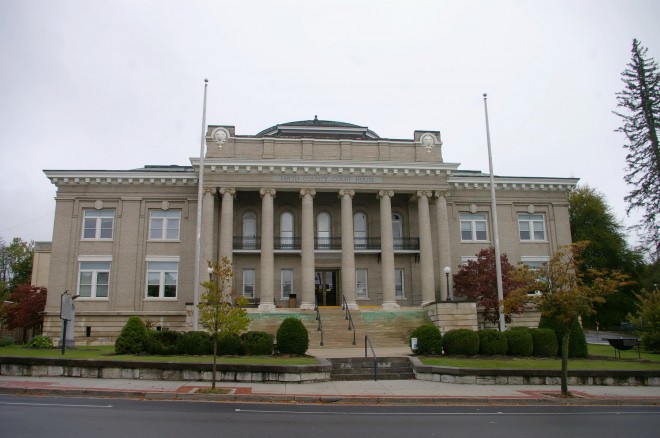 Smyth County is named for Alexander Smyth, who was a former Congressman from Virginia.

Note:  Every courthouse needs an eccentric character or event. Years ago, allegedly a drunk came into the courthouse. At that time the courthouse also served as the City Treasurer’s office. This man gave them a painting of a Dutchmen. He wanted that Dutchman to “guard the money.” It is now sitting above the vault of the Treasurer’s Office. During renovation of the building, one of the Clerks took it home for safekeeping. It was to returned to it’s lofty perch when it was safe.

History: The county was created in 1832 and Marion was selected as the county seat. The first courthouse was built by Thomas W Mercer and John Dameron in Marion in 1834. The courthouse was razed and the Francis Opera House on main Street was used until the second and present courthouse was constructed in 1905 to 1906 at a cost of $48,082.