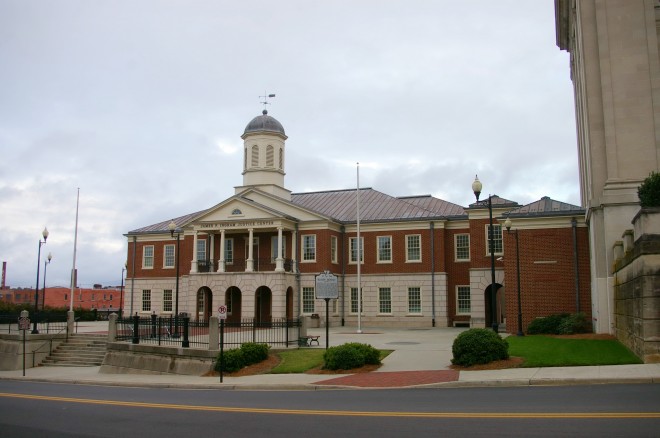 Danville is named for Dan River, which was named for the land of plenty as the founder Byrd felt that he had wandered from Dan to Beersheba.

Description:  The building faces northwest and is a two story red colored brick, stone and concrete structure. The building’s first story is faced in stone and the second story is of brick. The northwest front has a projecting portico with three high arches on the first story, four columns on the second story and a pediment at the roof line. On the center of the roof is a high octagonal cupola with dome. The roof is hipped. The building is named as the Judge James F Ingram Justice Center and is attached to the City Hall on the west side. In 1998 and 1999, the building was expanded. The architect was Don Swofford of Wood Swofford & Associates and the contractor was Kembridge Construction Company, Inc.

Note:  The courthouse is styled after the 1873 courthouse which had been demolished in 1926 when the Municipal Building was constructed. Description:  The building faces northwest and is a three story gray colored limestone, brick and concrete  style structure. The building is a “T” shape with a southeast wing. The northwest facade has a colonnade with Ionic order columns. At the center of the first story are three entrances. A wide cornice runs below the flat roof line. The old courtroom is located on the third story. The building served as the courthouse from 1927 to 1976.