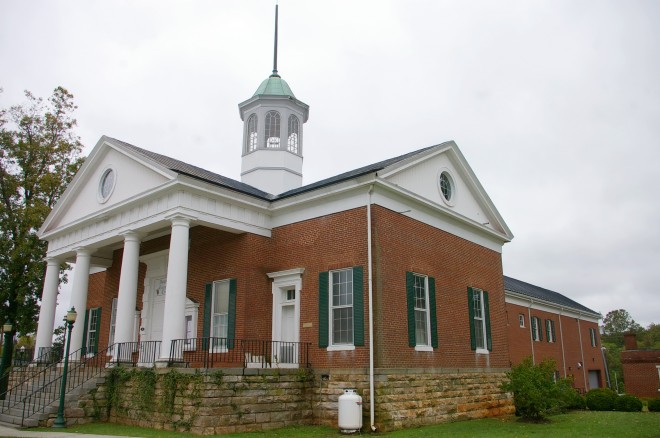 Description:  The building faces east and is a one story red colored brick structure. The east front has a large portico supported by four large white columns with the pediment having a round window. The building has a rough stone foundation. On the center of the roof is an octagonal white colored wood cupola with green colored roof. Description:  The building faces east and is a two story red colored brick and concrete structure. The east front has a recessed center section with two white colored columns rising to a header and recessed circular window on the second story. The main entrance on the north side of the front has a rounded one story portico with four columns. On the south side of the building is a one story section. The roof is hipped. The building is attached to the old courthouse on the southeast. In front of the building is a large stone Flood Family Memorial Tomb. Description:  The building faces east and is a two story red colored brick and wood structure located in the town center of Appomattox Court House ( Clover Hill ) which is the Appomattox Court House National Historic Park. The building was rebuilt in 1964. The east front has a second story entrance with stairs ascending to a small porch with pediment below the roof line. The red colored roof is hipped. The architect for the rebuilt building was Henry Judd.