Schley County is named for William Schley, who was a Governor of Georgia and a congressman. 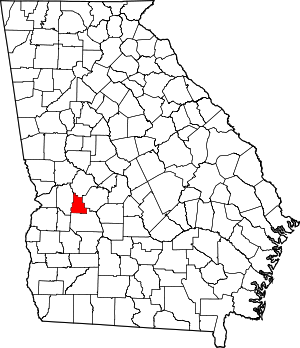 Description:  The building faces east and is a two story red colored brick and stone structure. The building is located on landscaped grounds in the center of Ellaville. The east front has a small enclosed brick porch with arched entrance. On either side are large arched windows. The center section of the second story is recessed with projecting sections on either side rising to pointed roof lines. On the center of the roof is a large white colored brick clock tower with clock and steep roof at the top. The courtroom is located on the second story. To the west is the Old County Jail built in 1893.