Rabun County is named for William Rabun, who was the thirty-first governor of Georgia from 1817 to 1819. 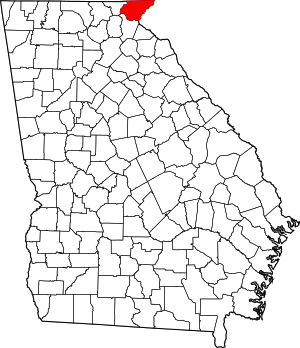 Description:  The building faces east and is a two story gray colored brick, stone and concrete structure. The building sits on edge of a ravine on landscaped grounds in the center of Clayton. The east front has a large central section with high rectangular opening having a recessed entrance and large arched glass window above. Red brick faces the first story which has vertical concrete divides separating the windows. On the second story, the window groupings protrude. The roof is a green color and a small square white colored cupola with clock and green colored dome rises from the building center. The building houses the County Superior Court, County Juvenile Court,  County Probate Court and County Magistrate Court of the 9th Judicial Administrative District.