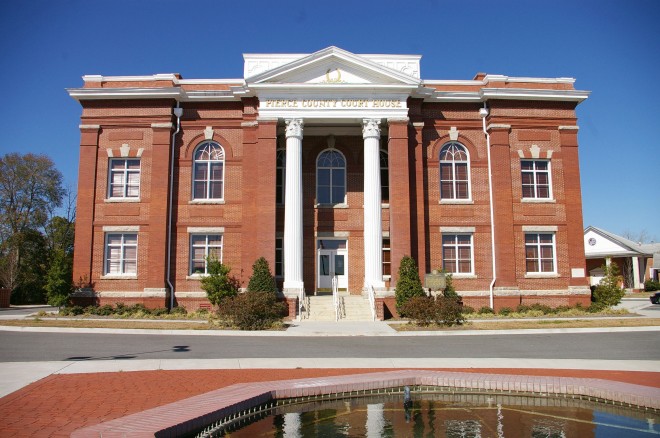 Pierce County is named for Franklin Pierce, who was the fourteenth president of the United States of America and who lived from 1804 to 1869.

Description:  The building faces southeast and is a two story red colored brick and concrete structure. The building is located on landscaped grounds in the center of Blackshear. The brick is in several shades of red with pink and white colored mortar. Colossal pilasters with stone trim alternate with square and round arched stone trimmed windows.  The southeast front has two large metal Corinthian columns rising to a pediment at the roof line. The entrance is recessed with an arched window above on the second story. The corners of the building project slightly. A wide cornice runs below the roof line. The interior features a small rotunda and the courtroom on the second story has been tastefully redone. The original metal ceiling was replaced with acoustical tile, but the judge’s bench with its pediment and flanking Ionic gold colored trimmed pilasters remain. A soft blue-grey color has been used for walls, draperies and carpet. The original balusters between the litigation and spectator sections remain; the design is repeated in the balusters of the staircase leading to the courtroom. The building houses the Superior Court and State Court of the 1st Judicial District.  A rear addition was added in 1975. To the south is the old County Jail built in 1894 and to the southeast is the County Courthouse Annex..

Description:  The building faces northwest and is a two story white colored wood frame structure. The building is located on landscaped grounds in the center of Blackshear to the south of the courthouse. The front has a large two story porch supported by four large white colored pillars. There is a balcony on the second story. The roof is hipped. The interior has high wood doors and twelve foot ceilings. The building is called Belvin Home.