Jeff Davis County is named for Jefferson Davis, who was the only President of the Confederate States of America. 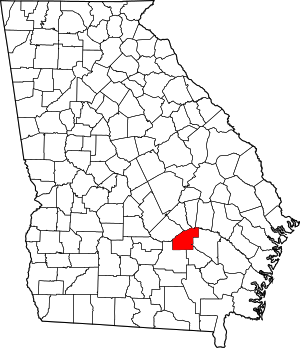 Description:  The building faces east and is a two story cream colored stucco and concrete structure. The building is located on landscaped grounds in the center of Hazelhurst. The building is constructed with concrete blocks covered with stucco. The building has a projecting center section which has three arches on the first story at the entrance. At each corner are hexagonal short towers. At the west center is an octagonal dome with clock and greenish colored roof. The courtroom is located on the second story. The building was renovated in 1994 to 1995. The architect was Brittain, Thompson, Bray, Brown, Inc. of Macon and the contractor was LPS Construction Company, Inc. of Statesboro.