Barrow County is named for David C Barrow, who was the chancellor of the University of Georgia. 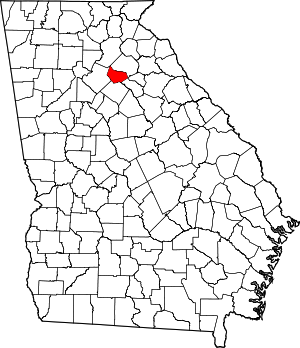 Description:  The building faces southeast and is a two story brown colored brick and concrete structure. The building is located on landscaped grounds in the center of Winder. The southeast front has a large portico with four columns rising to a pediment at the roof line. The windows are vertical with panels between  the first and second stories. On the center of the roof is a large octagonal white colored dome with clock and lantern at the top. On the south side is an addition constructed in 1989. The architect was Hunt/Eloe/MacKinnon, Inc. and the contractor was Terry Development Corporation. A further addition was constructed in 2012 to 2013. Description:  The building faces north and is a three story brown colored brick and concrete structure. The building is located on landscaped grounds at the northwest corner of Winder,. The north front has a projecting center section with large arched window extending to the third story. The east and west corner sections extend from the main building. There is white colored stone facing on the front and along the sides of the first story. The roof line is flat.