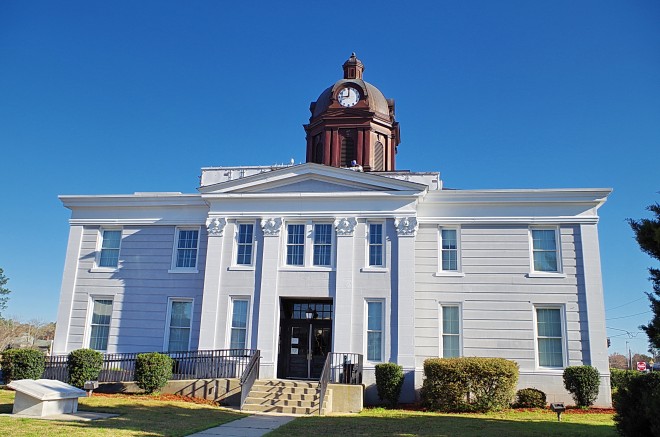 Appling County is named for Daniel Appling, who was a soldier in the War of 1812.

Description:  The building faces east and is a two story gray and white colored limestone and concrete structure. The building is located on landscaped grounds in the center of Baxley. Facing east, there is a large portico supported by four large columns rising to the pediment at the roof line. There is a similar portico on the west side. There is white colored horizontal trim at the corners which project from the building. On the center of the roof is a large red colored octagonal dome with clock. In the interior, the building has Georgian marble wainscoting, original tin ceilings and woodwork. The large courtroom is located on the second story and has a balcony and a stained glass window behind the judge’s bench depicting the Georgia State Seal. The building houses the County Probate Court of the 1st Judicial Administrative District. The building was renovated in 2006. The architect was McCall and Associates Inc. and the contractor was Pope Construction Company, Inc.

History:  The county was created in 1818 and Homesville was selected as the county seat in 1828. The first court met at the homes of John Johnson and William Cartier Jr. The first courthouse was a wood structure built in Holmesville in 1828 but burned in the 1850’s. In 1872, the county seat was moved to Baxley and the second courthouse, a wood structure, was built in 1873. The third and present courthouse was constructed in 1907 to 1908 at a cost of $50,000. 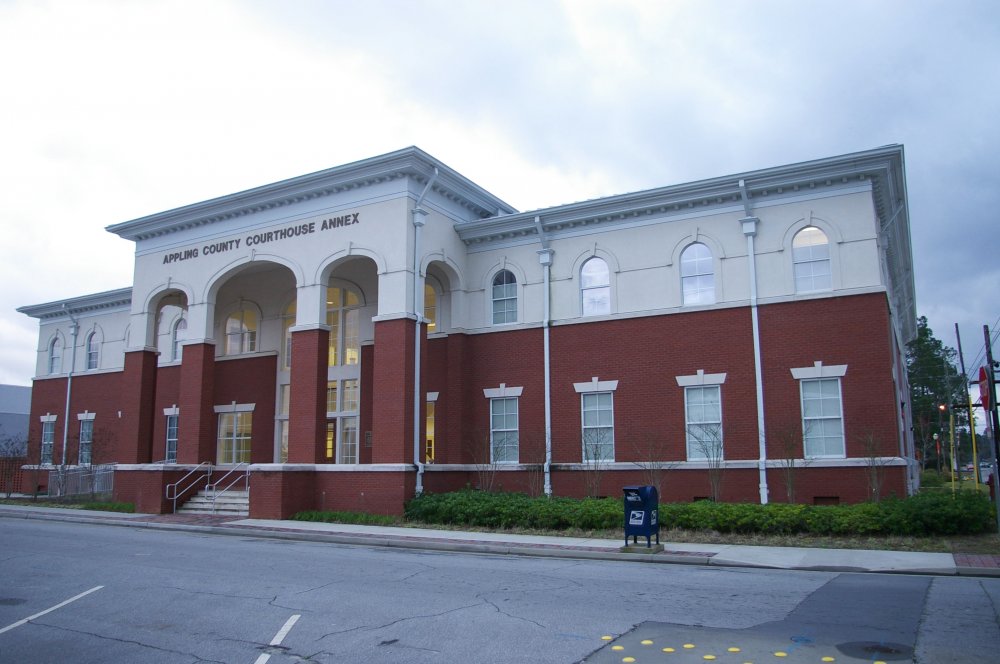 Description:  The building faces north and is a two story red and white colored brick and concrete structure. The building is located in the center of Baxley to the west of the courthouse. The north front has a large portico rising above the roof line, and with a large central arch and two smaller arches on each side. Behind is the entrance with glass panels. The first story is dark red colored brick and the second story is gray colored brick. The roof line is flat. In the interior is a two story entrance hall with stairs. There are courtrooms on the second story. The building houses the County Superior Court, County State Court and County Juvenile Court of the 1st Judicial Administrative District. 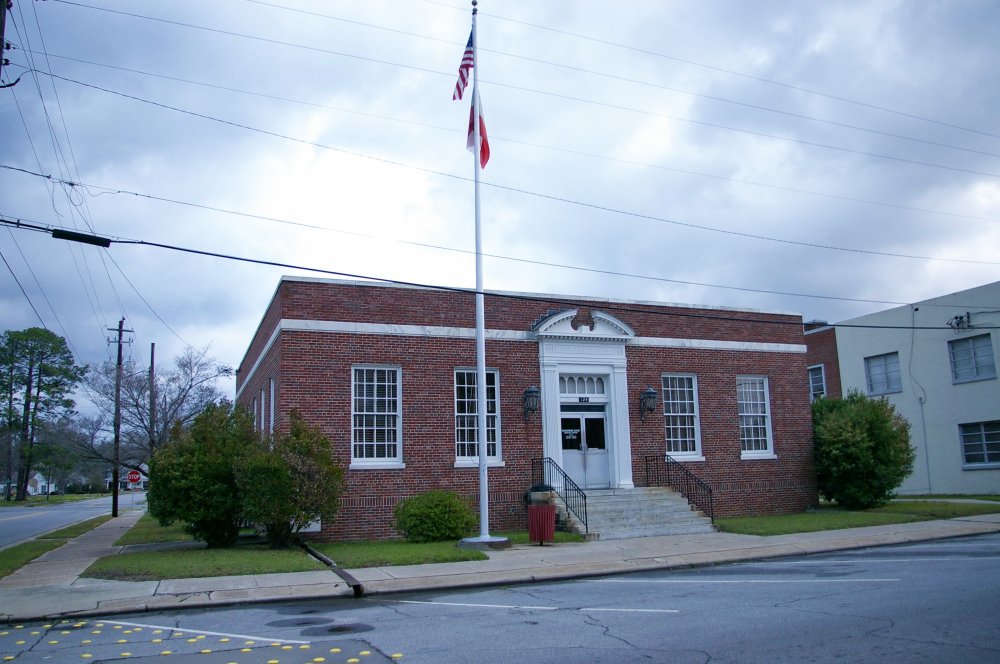 Description:  The building faces south and is a one story light red colored brick, steel and concrete structure. The building is located in the center of Baxley to the west of the courthouse. The south front has a central entrance with white colored frame. A horizontal white colored band runs below the flat roof line. The building houses the County Magistrate Court of the 1st Judicial Administrative District. The building was a United States Post Office until 1997. The supervising engineer was Neal A Melick. 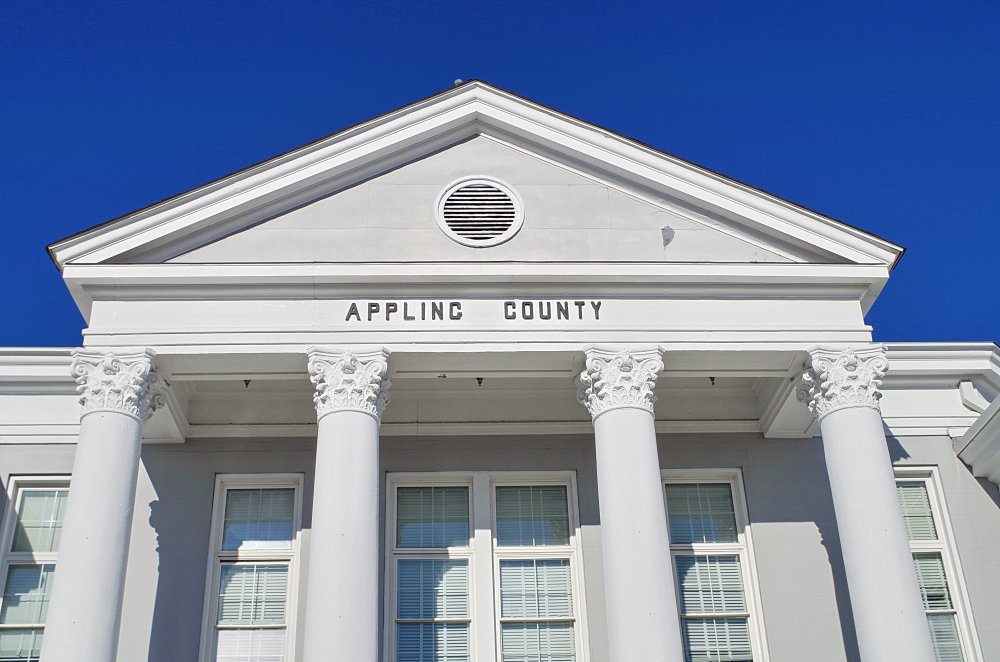 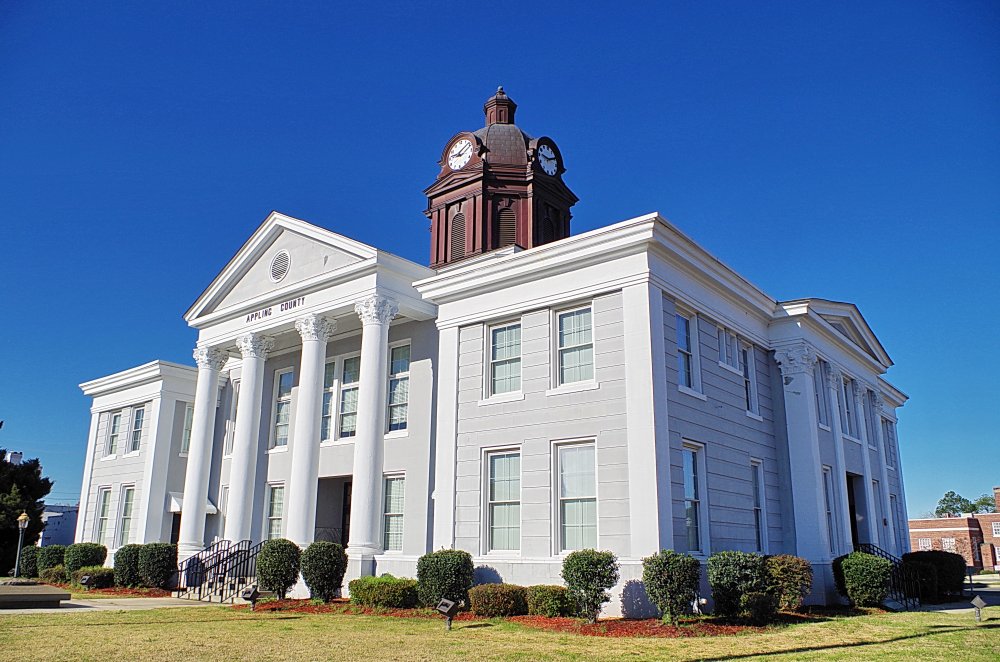 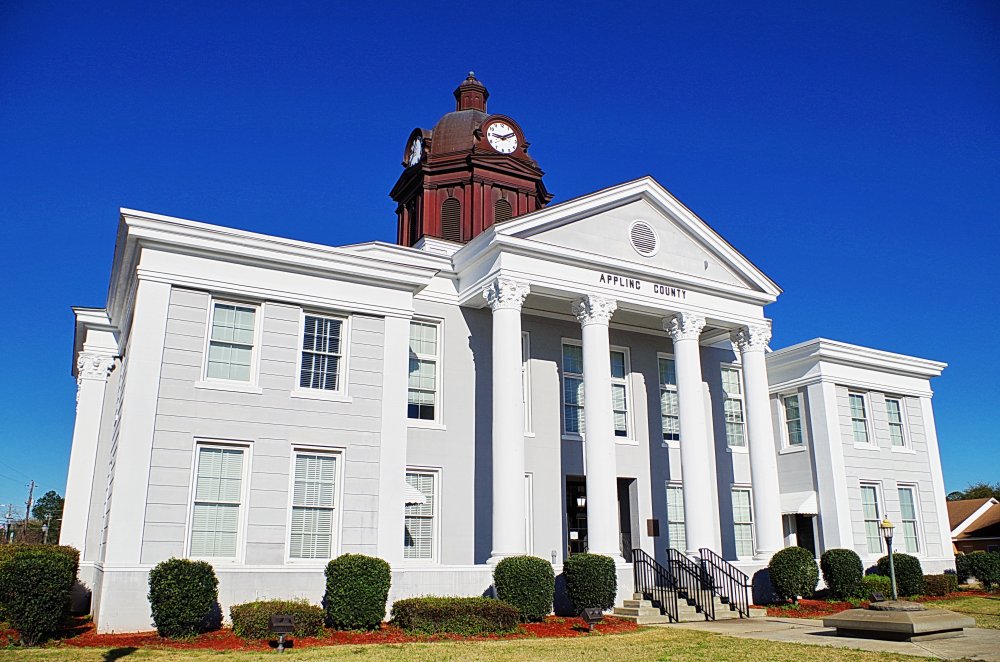 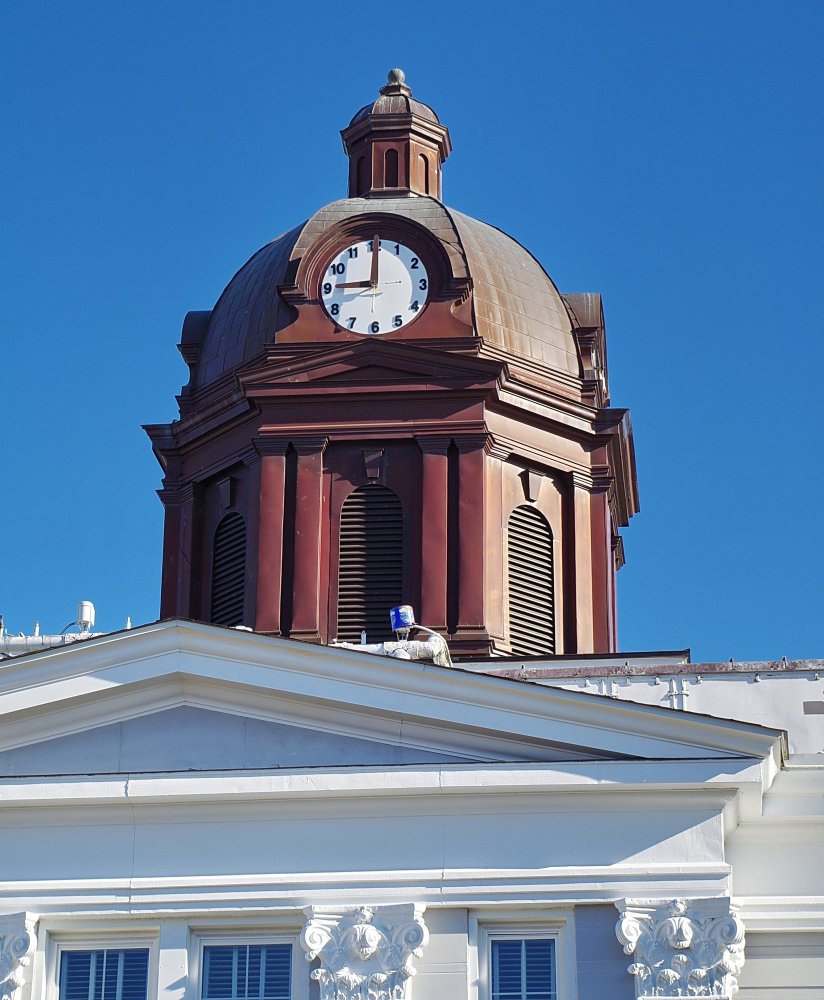 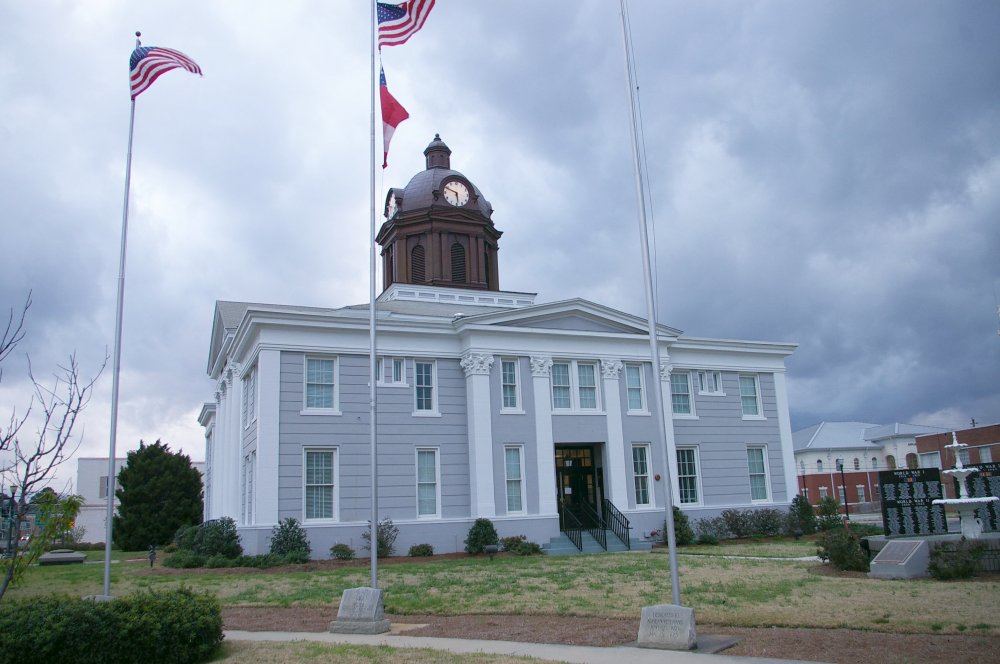 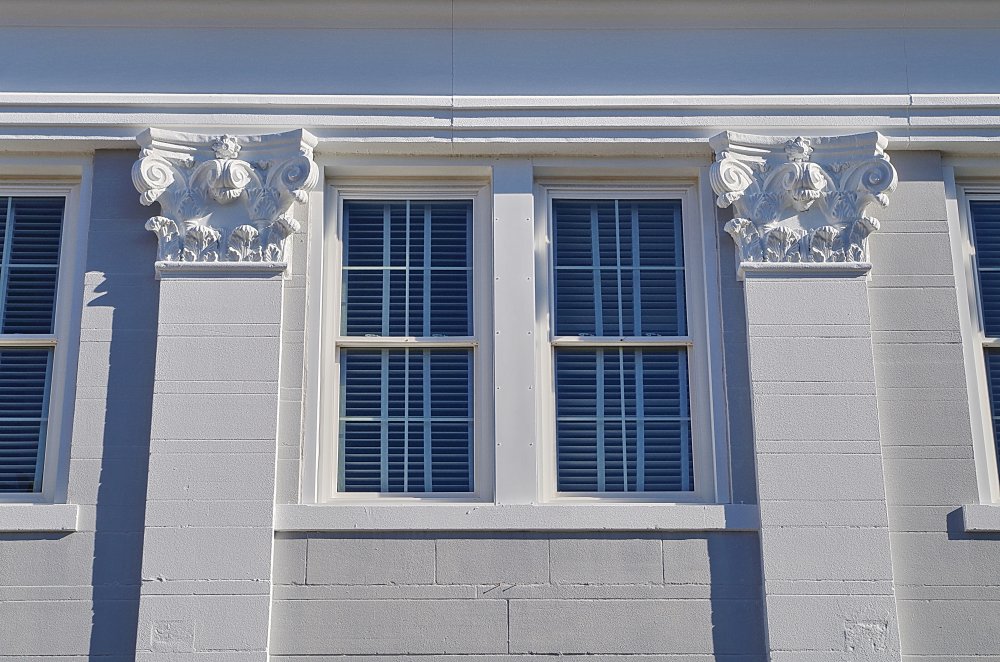 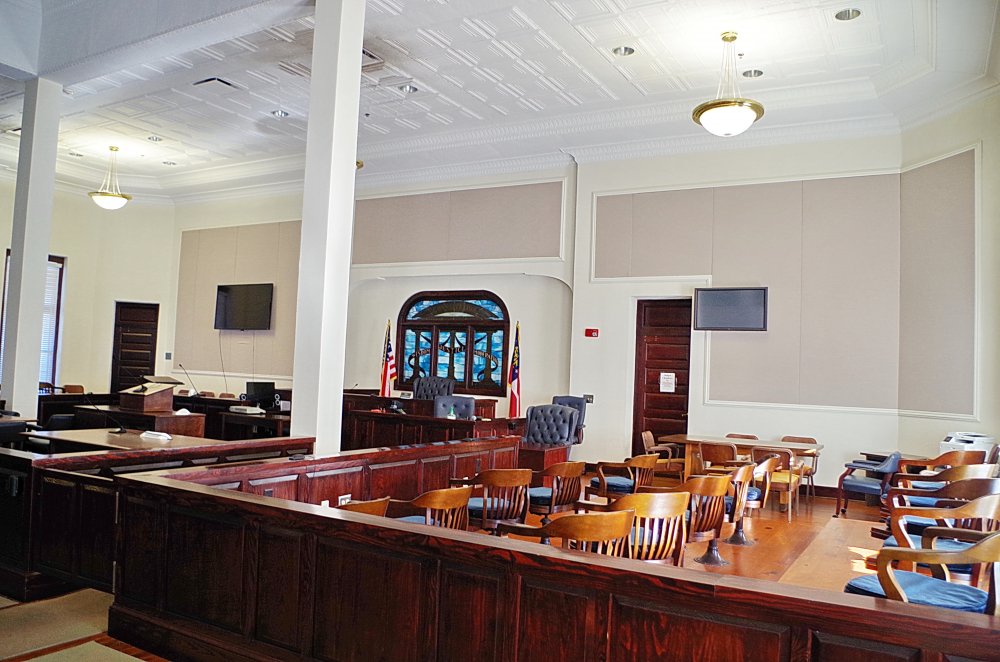 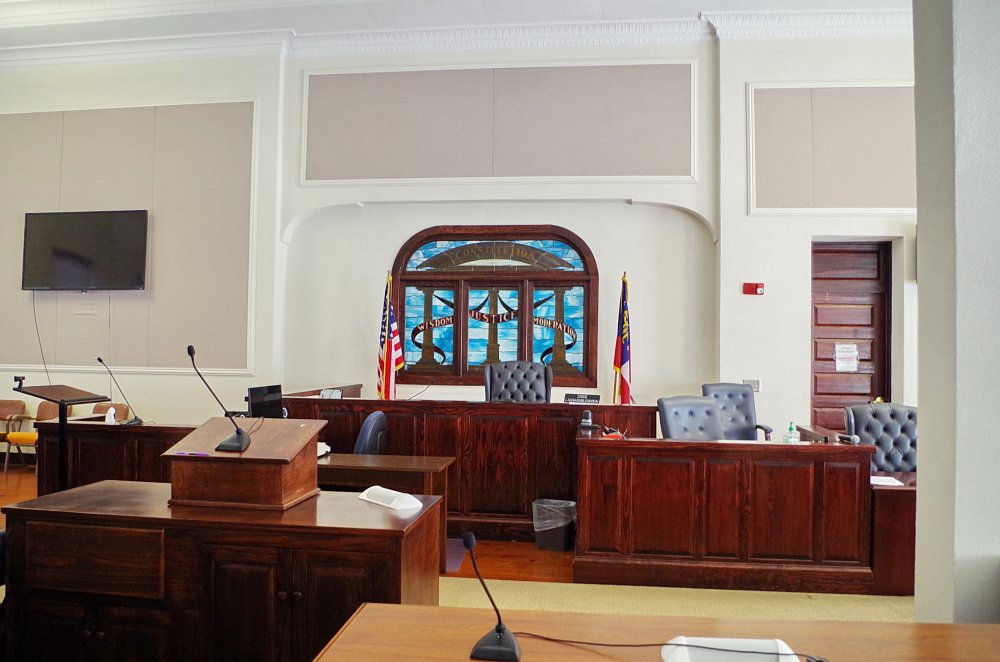