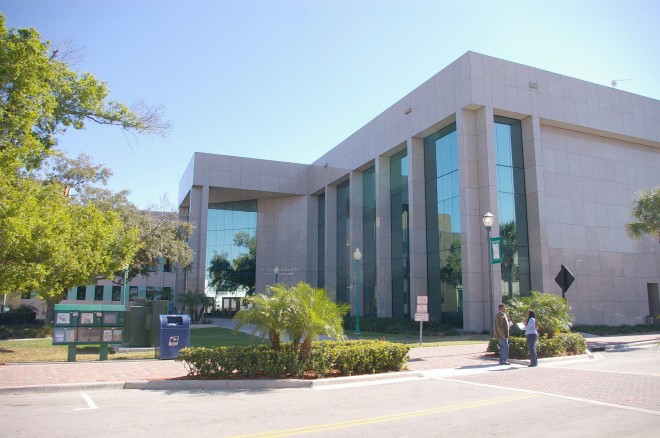 St. Lucie County is named for Saint Lucie of Syracuse which was the name of a Spanish Fort built near Cape Canaveral in 1565. 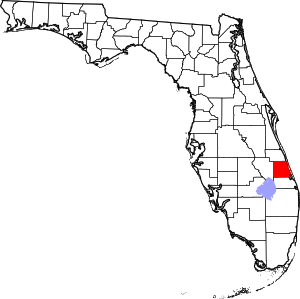 Description: The building faces west and is a three story glass and concrete structure. The rectangular shaped building is located on the landscaped grounds of the County Courthouse Complex in the center of Fort Pierce. There is a projecting one story entrance at the center of the west front. The building joins the modern addition on the south side and the County Clerk of Courts Building on the north side. In 1988 to 1990, a modern two story addition was constructed on the south side and iwhich s  a concrete, glass and polished stone structure. The north front has a large square portico supported by high pillars. Along the front are narrow vertical windows divided by vertical pillars. The roof line is flat. On the east side is a large glass wall. The building joins the  courthouse on the north side. The building houses the Circuit Court of the 19th Judicial Circuit and County Court. The addition architect was Stebbing & Scott and the contractor was M J Anderson. 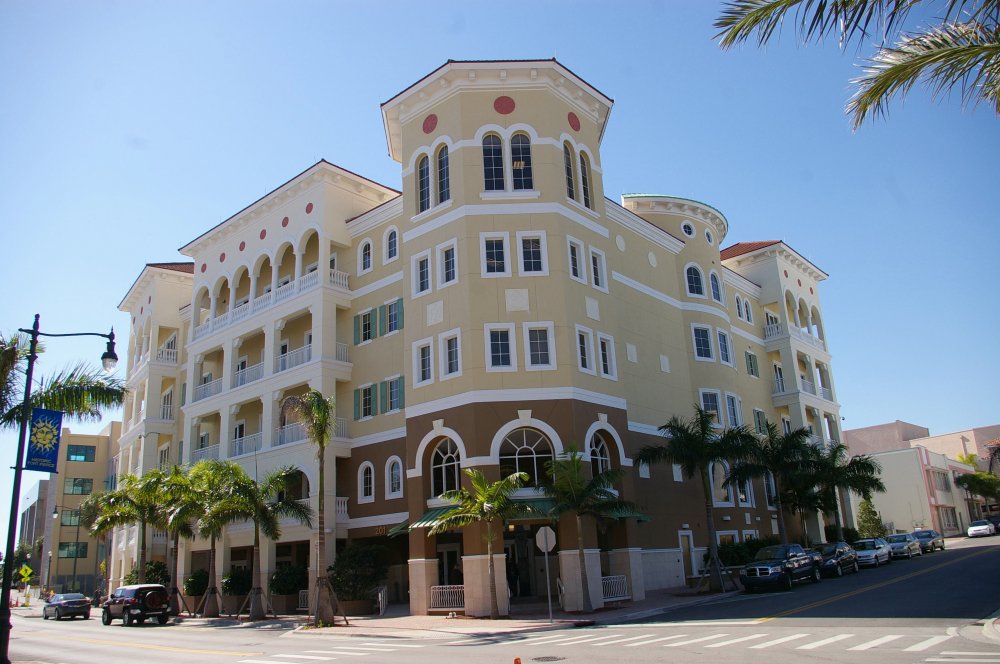 Description: The building faces north and is a five story brick, concrete and glass structure. The building is located on the landscaped grounds og the County Courthouse Complex in the center of Fort Pierce. The lower part of the building has brown colored brick and the upper part is yellow colored brick. The northeast corner has an octagonal tower with recessed entrance. Along the sides are tiers of white colored balconies. The building is connected on the south side to the courthouse. The building houses the Office of the Clerk of Courts.

History:  In 1565, Fort Saint Lucia was built by the Spanish at the Jupiter Inlet. In 1810, the area was known as East Florida and in 1821 became St. Johns County. In 1840, it became Mosquito County and then St. Lucie County in 1844 with county seat at Susanna. In 1880, it became part of Brevard County with county seat at Titusville. The present county was created in 1905 and Fort Pierce was selected as the county seat. The first courts met in the Fort Pierce Improvement Club Hall on North Second Street. The first courthouse was a two story red colored brick structure designed by H I Klopp and constructed by Mutual Construction Company of Louisville, Kentucky in 1909 on South Second Street at a cost of $31,000. The second courthouse was constructed on the east side of the same site in 1959 to 1961. The 1909 courthouse was razed when the new courthouse was completed. An addition was constructed in 1988 to 1990. 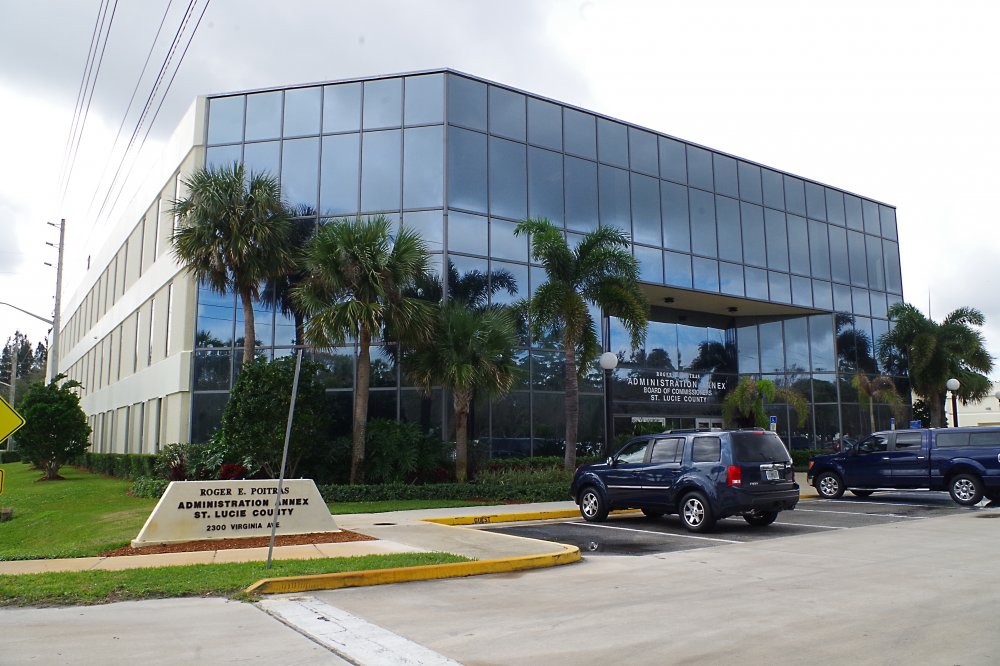 Description: The building faces north and is a three story concrete and glass structure. The building is located on landscaped grounds in the on the southwest side of the center of Fort Pierce. On the east is the three story rectangular shaped section with glass panels across the north front with a recessed center entrance. The roof line is flat. On the west side is a long two story section with flat roof line which was constructed earlier in 1976 to 1977.  The building is named as the Roger E Portras Building. 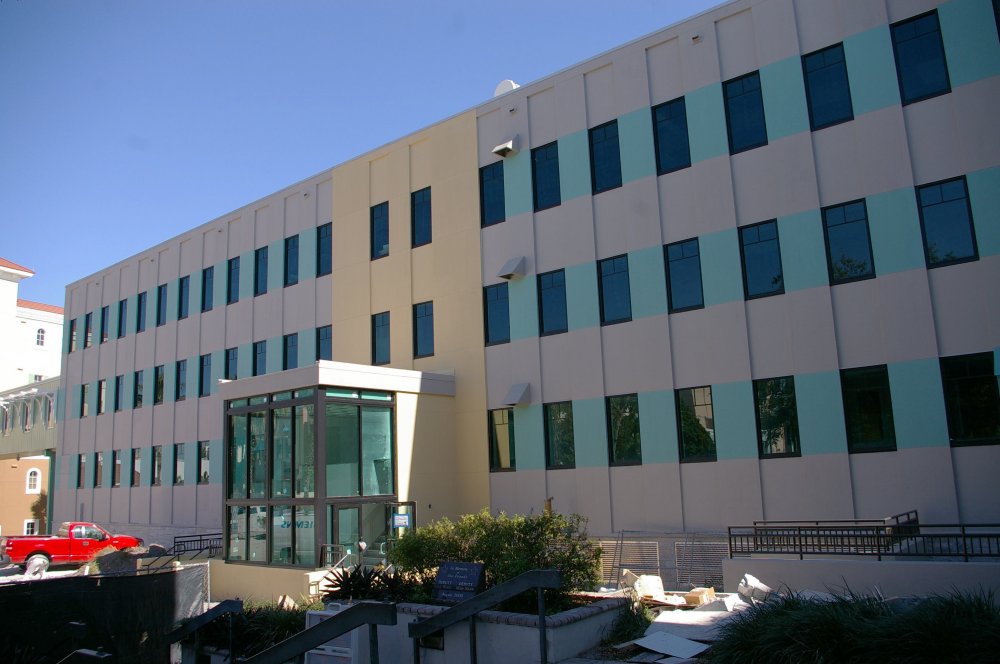 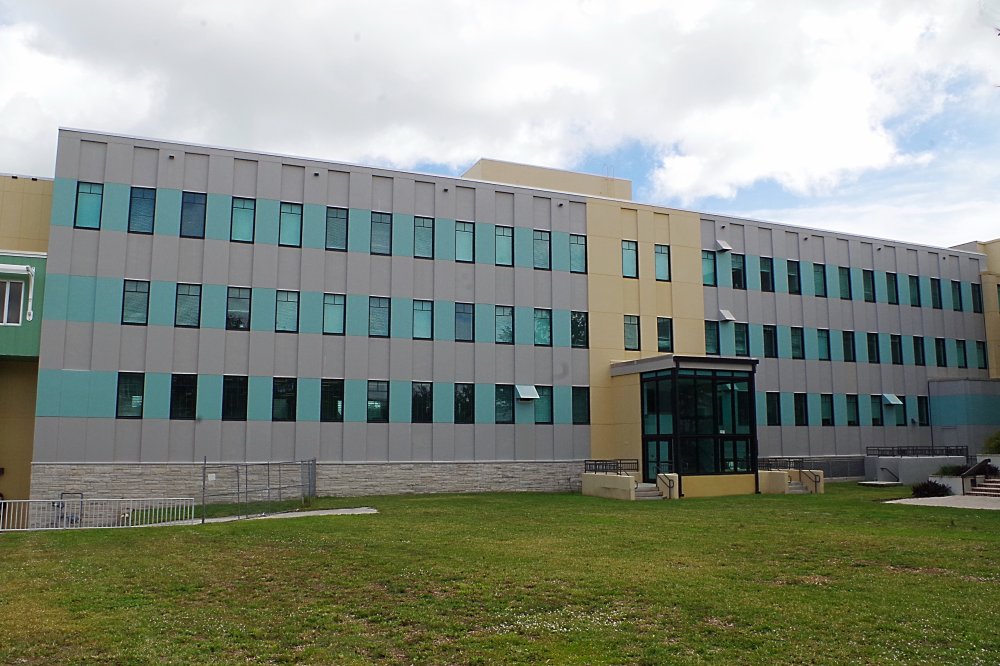 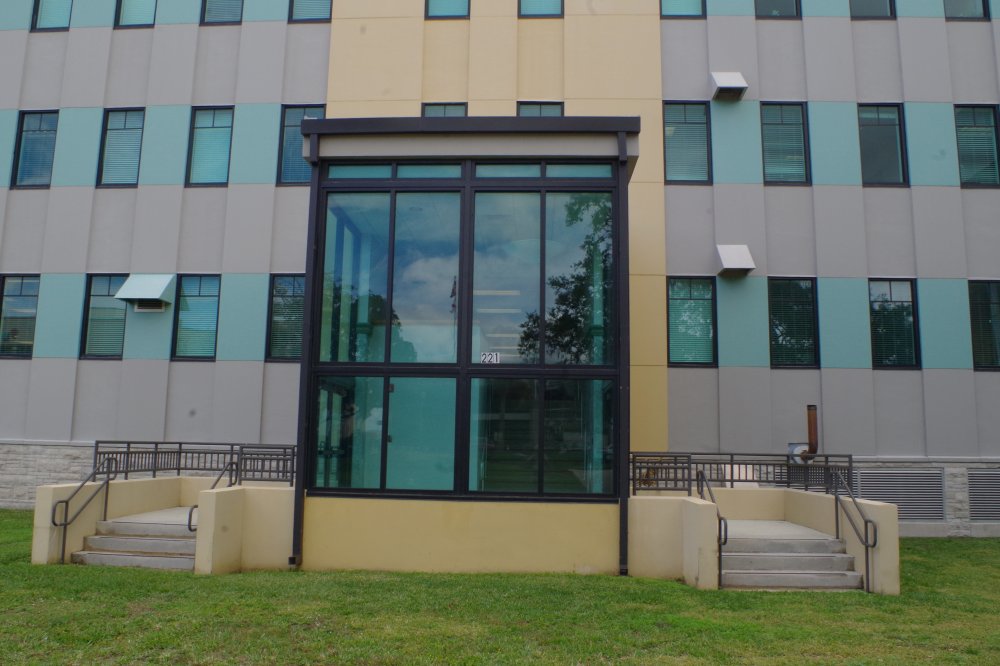 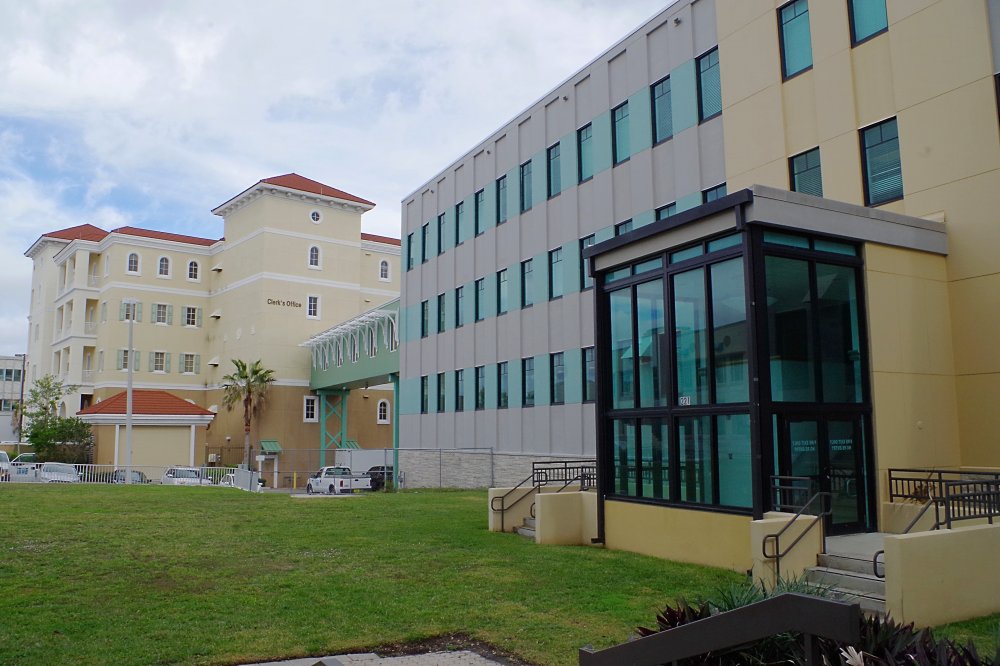 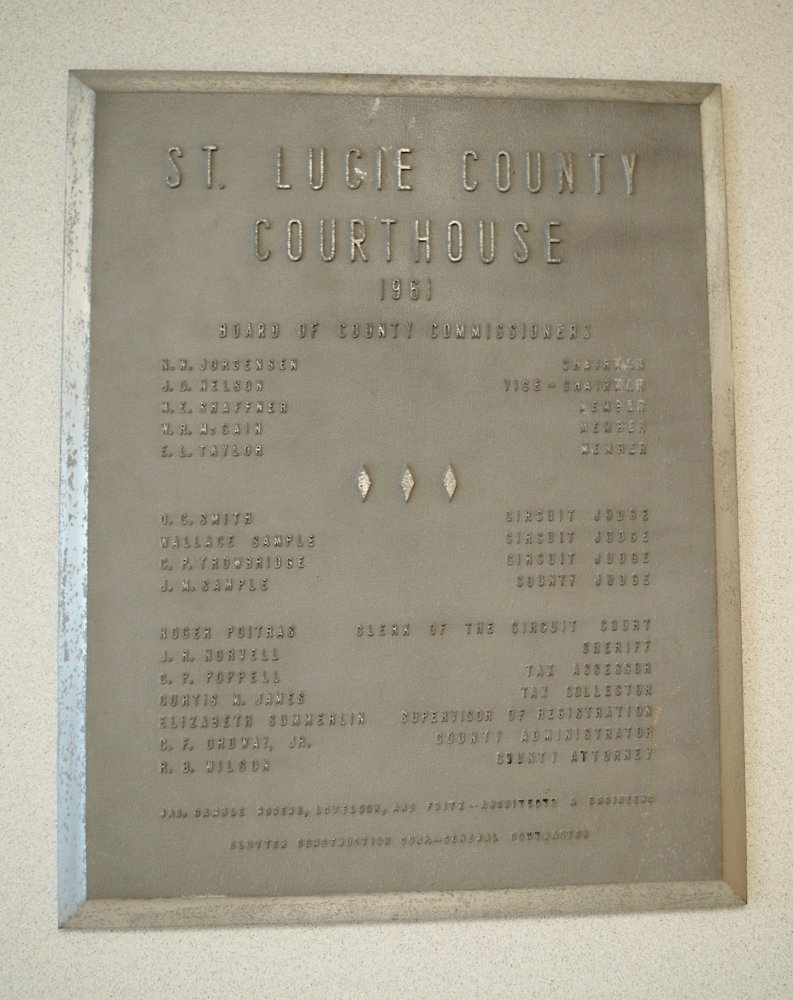 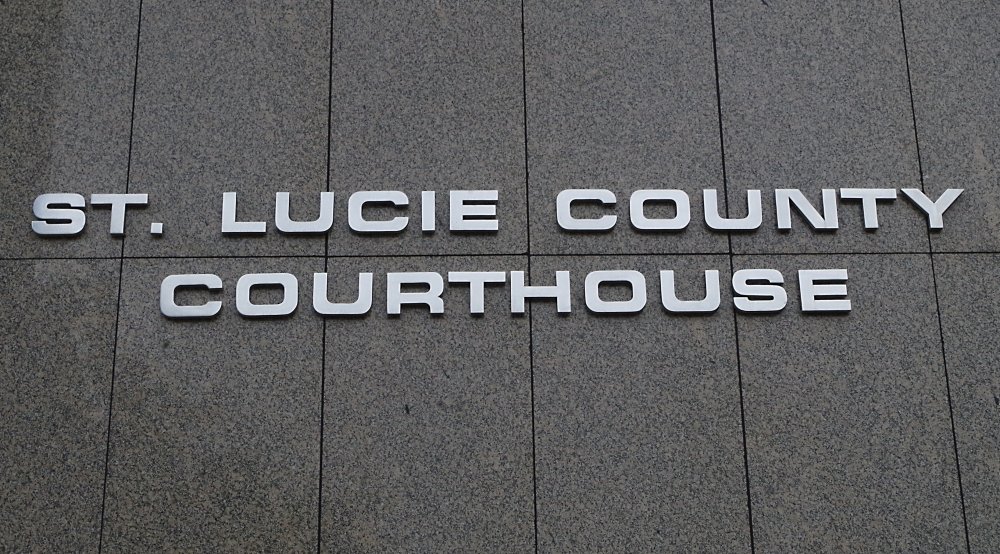 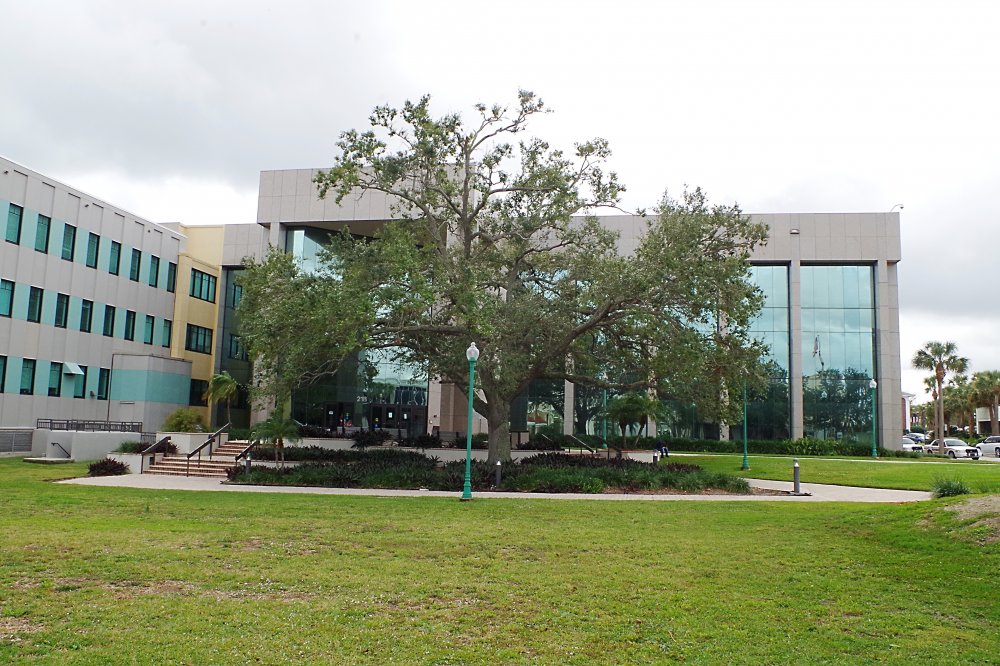 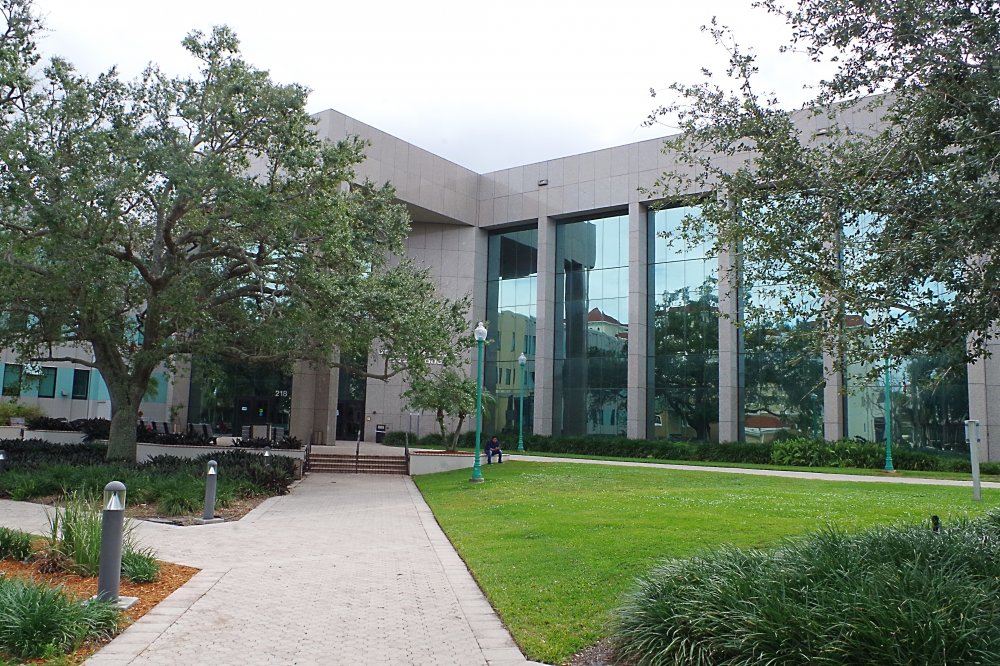 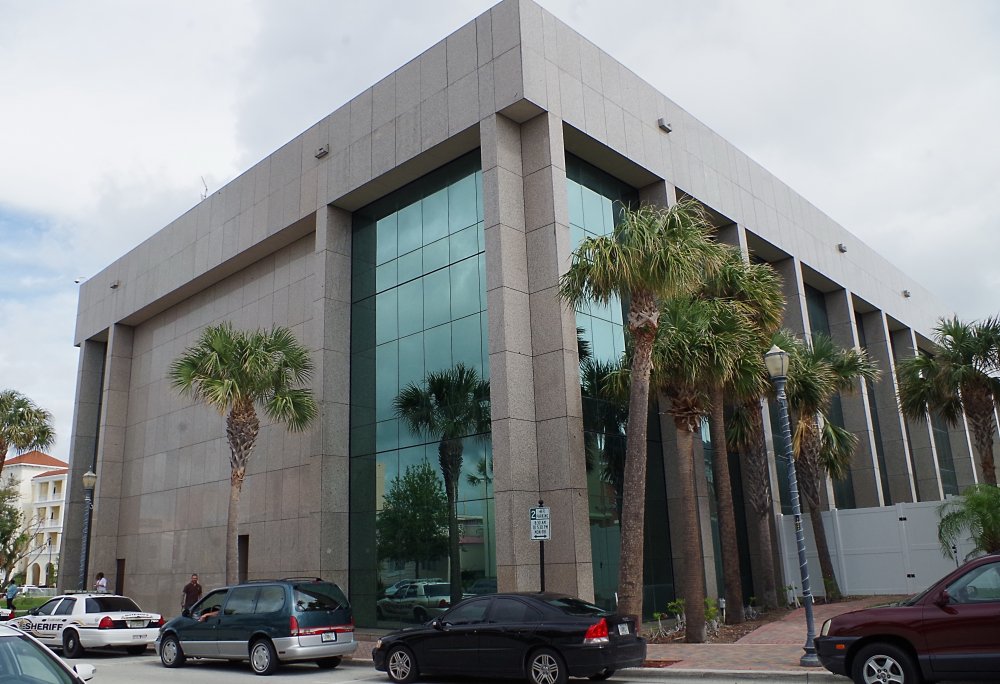 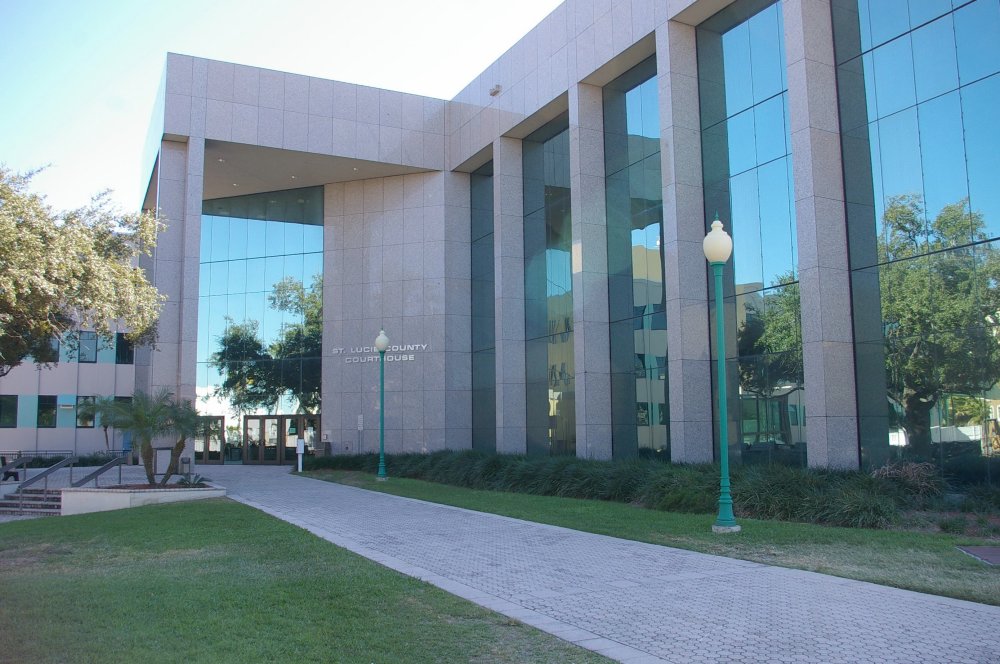 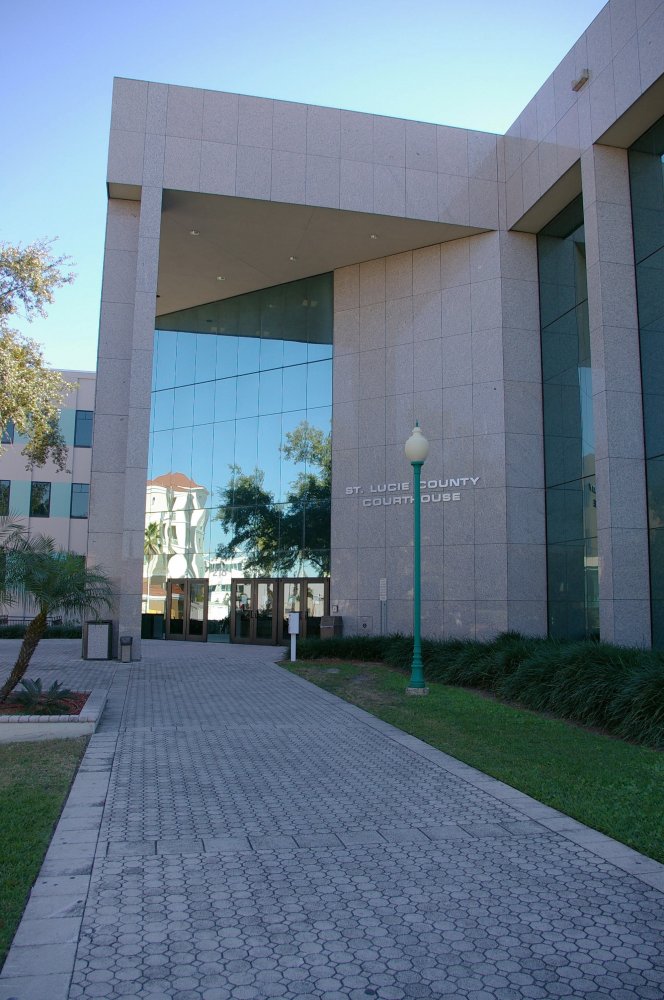 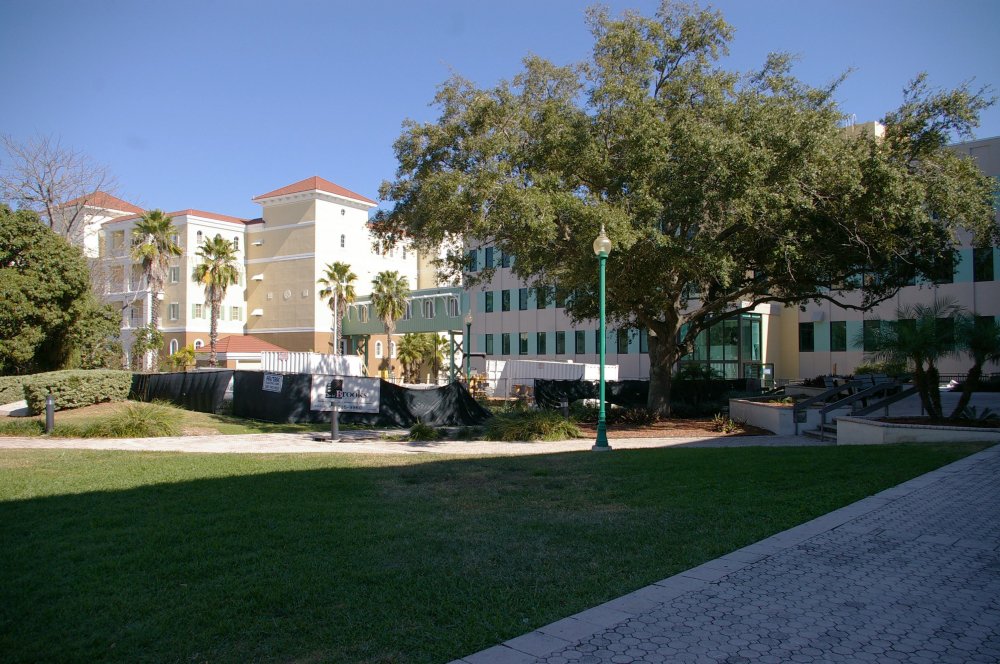 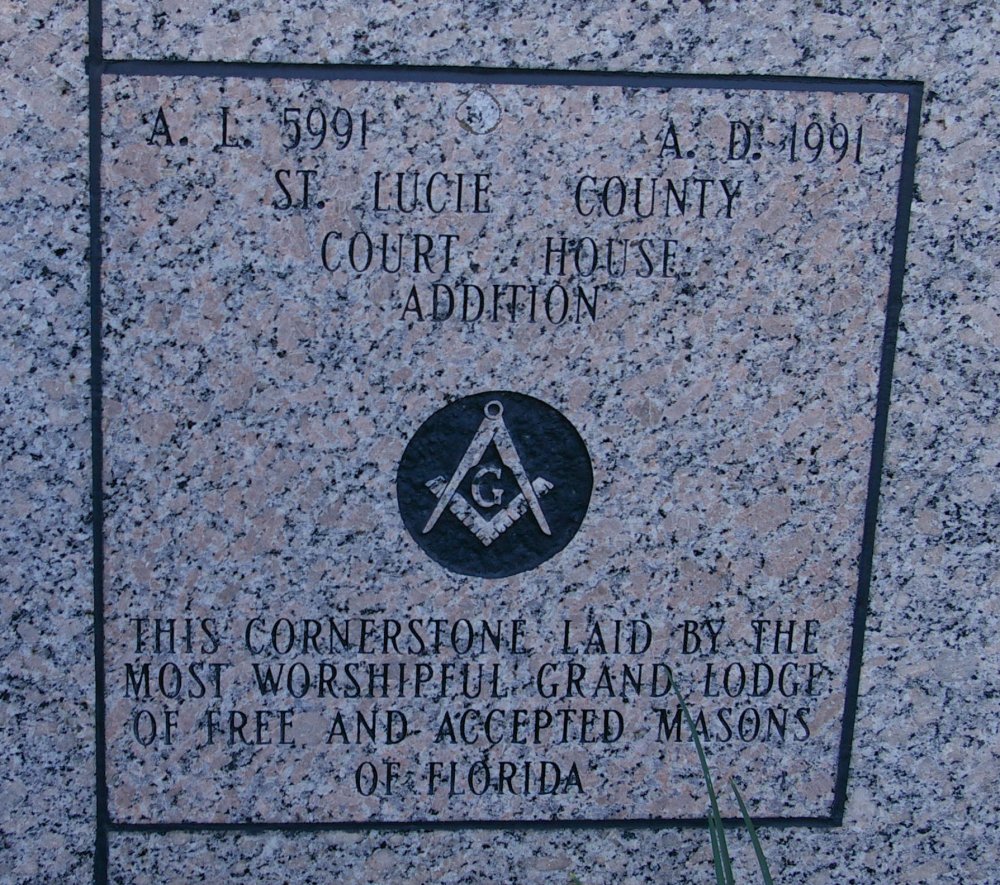 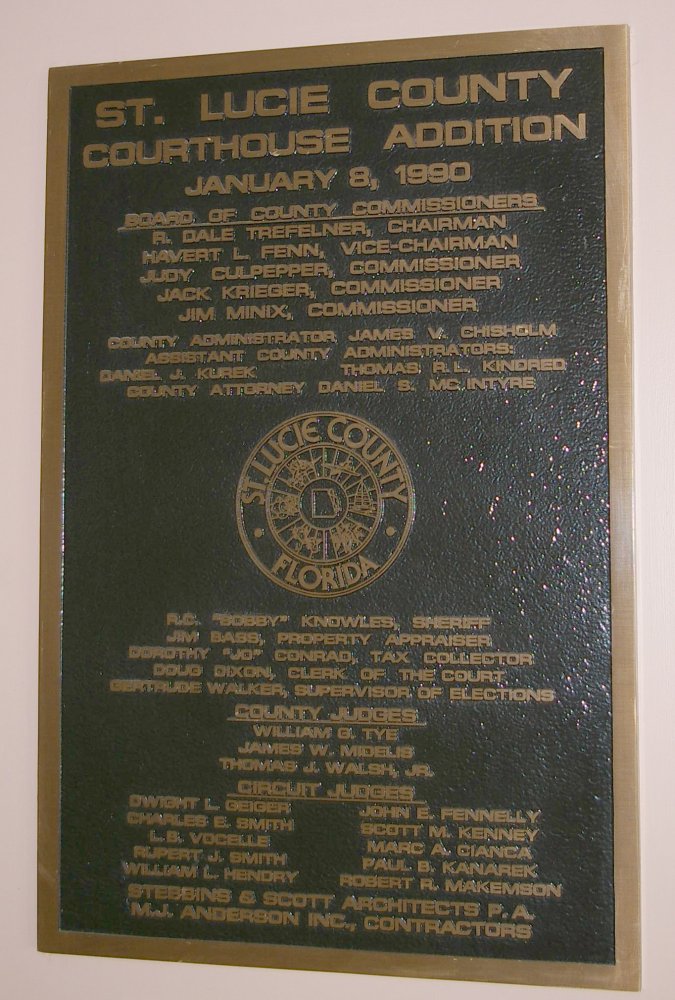 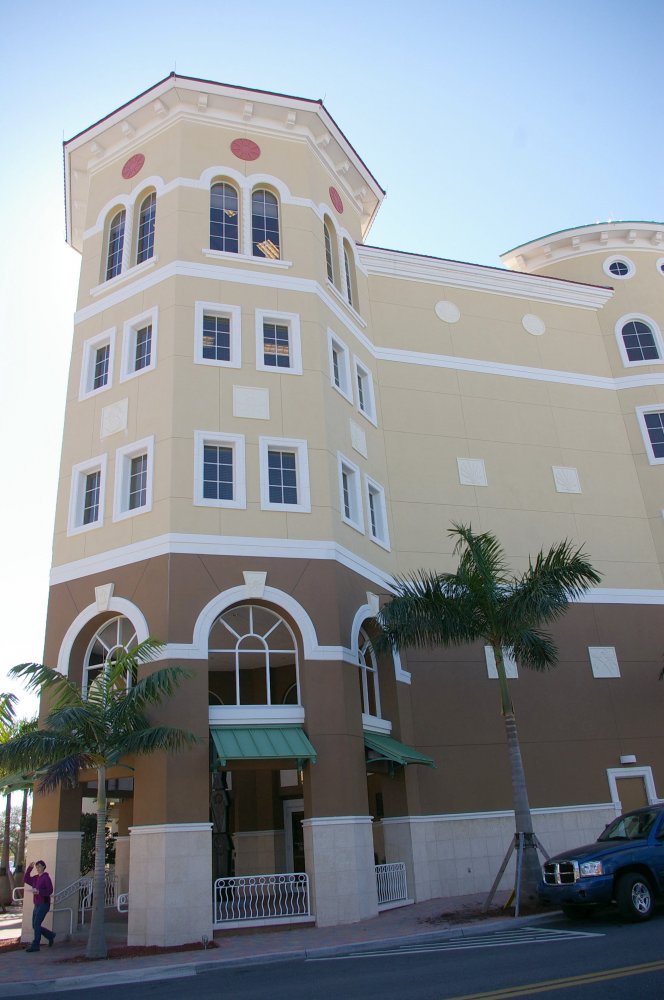 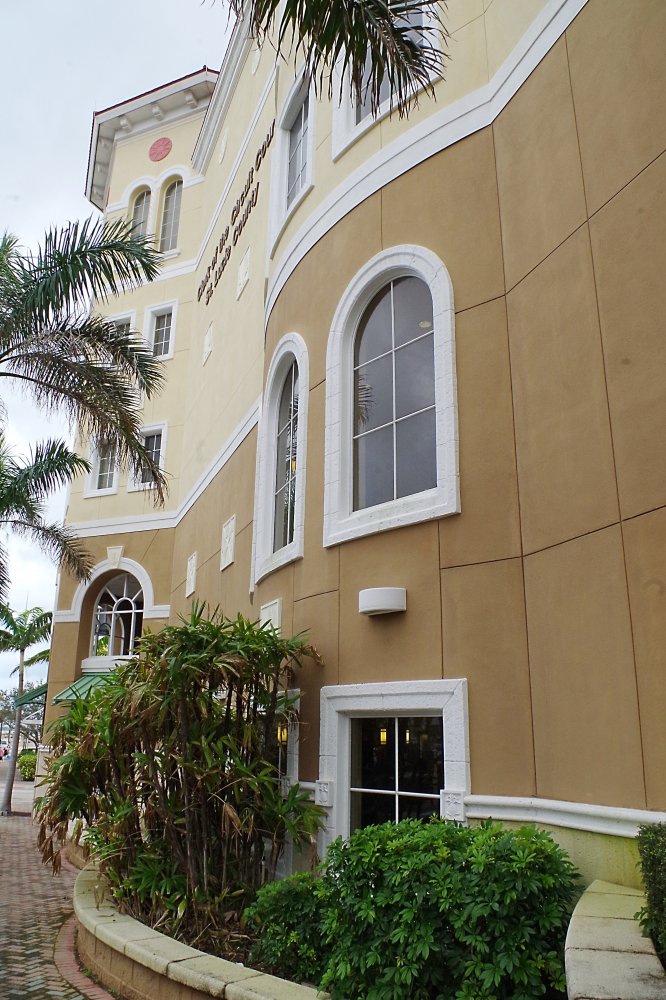 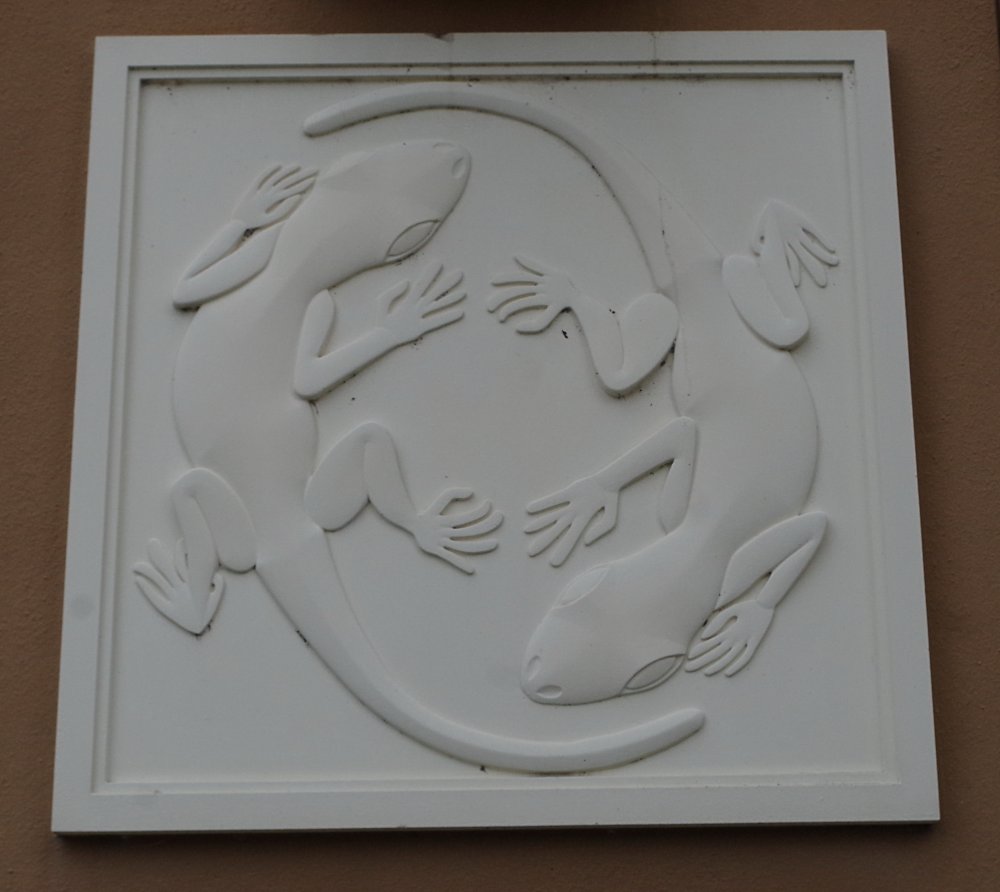 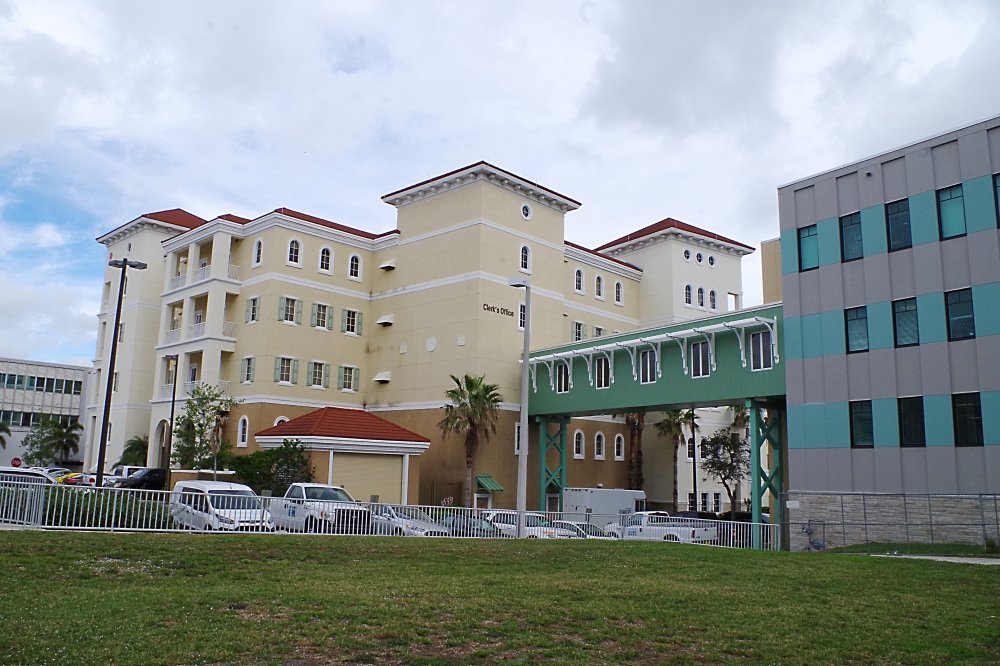