Seminole County is named for the Seminole Native American tribe who resided in the region. 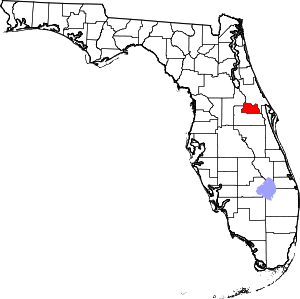 Description: The building faces east and is a four story glass and concrete structure. The building is located on landscaped grounds to the south of the center of Sanford. The east front has a two story projecting entrance section. The central section rises to a square brown colored section rising above the roof line, and with small square section above. The north and south wings are two stories. The building is named as the Seminole County Justice Center and Public Safety Administration Building.

Desscription: The building faces east and i

Built in 1999, the modern building is a one story slit face stone, stucco and concrete structure. The building is located on landscaped grounds to the south of the center of Sanford. The east front has a large semi-circular section with pillars between recessed windows. The roof line is flat.

History:  The county was created in 1913 and Sanford was designated as the county seat. The first courthouse was the Welborne Building on North Hark Street which became the Valdez Hotel. The second courthouse in 1918 was the Elks Club designed by L Percival Hunter and built in 1913. The third courthouse was constructed in 1971 to 1972 and is still standing. The County Criminal Justice Center was constructed in 2002 to 2004.