Pinellas County is named for the Spanish “Punta Pinal” meaning “Point of Pines” or “Piney Point”. 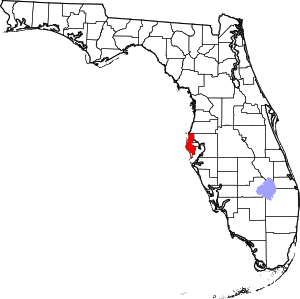 Description: The building faces north and is a six story rectangular shaped concrete and glass structure. The first story has a recessed arcade along the east and north sides of the building with glass walls. On the north and south sides, the windows are set in large vertical sections with panels between each story. The roof line is flat.The building houses the County Circuit Court of the 6th Judicial Circuit and County Court. In 1980 to 1981 a two story  buff colored brick, glass and concrete addition was constructed on the south side. The architect was Patrick & Prindle Partners and the contractor was W G Mills Inc. Description: The building faces east and is a two story buff colored brick and stone structure. The building has a high porch on the east front with four large columns rising to a wide header at the roof line. The north and south wings are recessed. On the south side of the building is the modern six story brick, concrete and glass County Office Annex.