Pasco County is named for Samuel Pasco, who was a state legislator and a United States Senator. 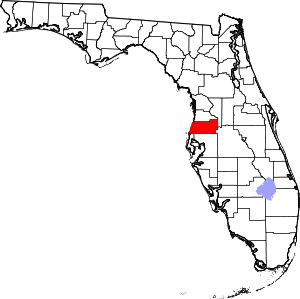 Description: The building faces north and is a two story red colored brick, stone  and concrete structure. The building is located on landscaped grounds in the center of Dade City. The portico at the north side has four large white colored Tuscan columns rising to a pediment. The porticos on the east and west sides have two large white colored columns rising to pediments. On the center of the roof is an octagonal dome with clock and white roof. In the interior, the floors on the first story are mosaic title. The three entrances lead into the central hallways that divide the building into quadrants, The walls are plaster finished. The stairs have the original metal tailing, newels and marble steps. The former courtroom now used as the Commissioners Room is located in the central part of second story. The building was renovated in 1920, 1938, 1952, 1956, 1958 and 1961. During 1996 to 1998, the building was restored to the original 1920 structure. The architect was Rink Reynolds Diamond Fisher Architects and the contractor was Prelude Construction Company, Inc. and Costal Construction Services Inc.

Description: The building faces south and is a two story glass and concrete structure. The building is located on landscaped grounds in the center of Dade City to the northeast of the courthouse. The south front has a projecting concrete arch on the east side and large glass section on the west side. The roof line is flat. The building houses the Circuit Court of the 6th Judicial Circuit and County Court. The building is named as the Robert D Sumner Judicial Center.