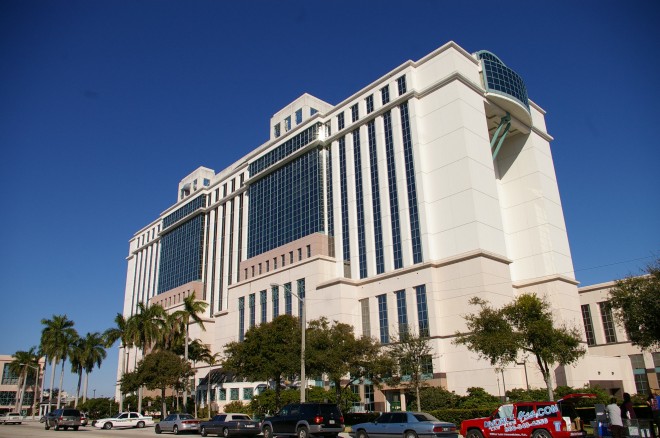 Palm Beach County is named for the many palm trees along the ocean beaches. 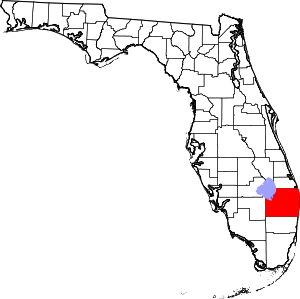 Architect:  Michael A Shiff and Associates Inc and Hansen and Meyers Inc

Description:  The building faces east and is a multi story concrete and glass  structure. The building is located on landscaped grounds in the center of West Palm Beach across from the old courthouse. In the center of the first story is a large arch with entrances on the north and south. The windows are vertical with concrete dividers between. The upper stories have large glass paneled sections. The roof line is flat. The building is named as the Judge Daniel T K Hurley Courthouse. The courtrooms are located on the ninth to eleventh stories. The building houses the Circuit Court of the 15th Judicial Circuit and County Court. 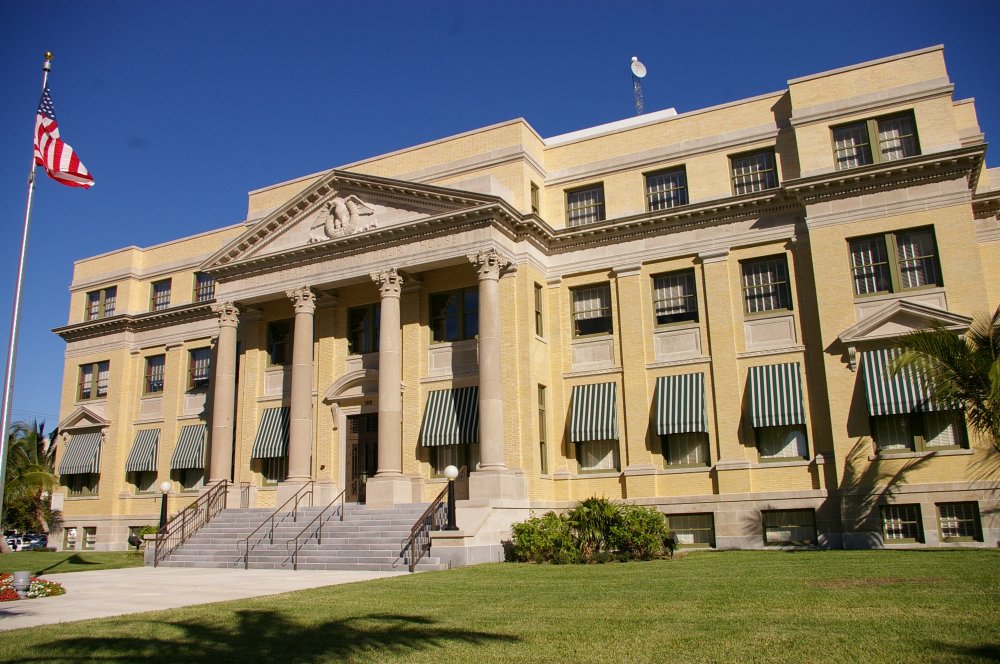 Description:  The building faces west and is a three story buff colored brick, stone  and concrete structure. The rectangular shaped building is located on landscaped grounds in the center of West Palm Beach. The west front has a central portico with four Corinthian columns rising to a wide pediment at the third story with a large eagle crest. A wide cornice runs along the top of the second story. The north and south sections project slightly from the main building. The roof line is flat. In the interior is marble wainscoting and mosaic tile flooring. The former main courtroom is located on the third story with ceiling rising to the fourth story and having a plaster ceiling and moldings, and maple flooring. In 1955, the annex was attached to the courthouse. In 1969 to 1970 a further addition was built around the courthouse and the annex. The architect was Donald Edge and Jefferson N Powell. In 2004 to 2006 the additions were remove and the original building remained and was restored. The architect was REG Architects of West Palm Beach and the contractor was Hedrick Brothers Construction of West Palm Beach. The building houses a museum.

Description:  The building faces west and is a twelve story glass and concrete structure. The building is located on landscaped grounds in the center of West Palm Beach on the east side of the courthouse. The windows ate horizontal and the roof overhangs, The building is named as the Robert Weisman Palm Beach County Government Center.

See:  Located in the county is the Court of Appeal – Fourth Judicial District. 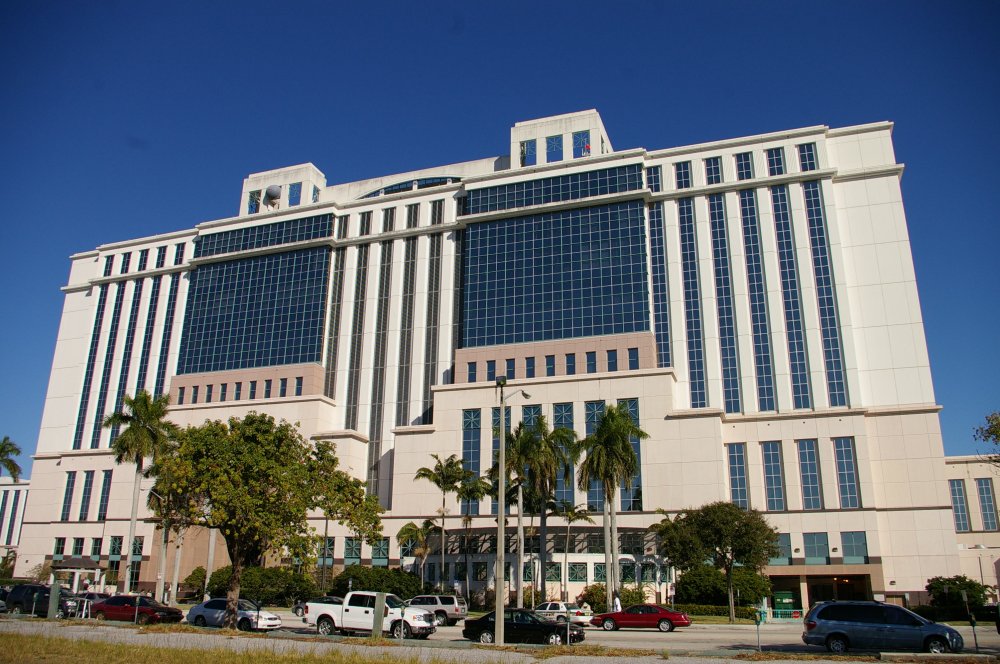 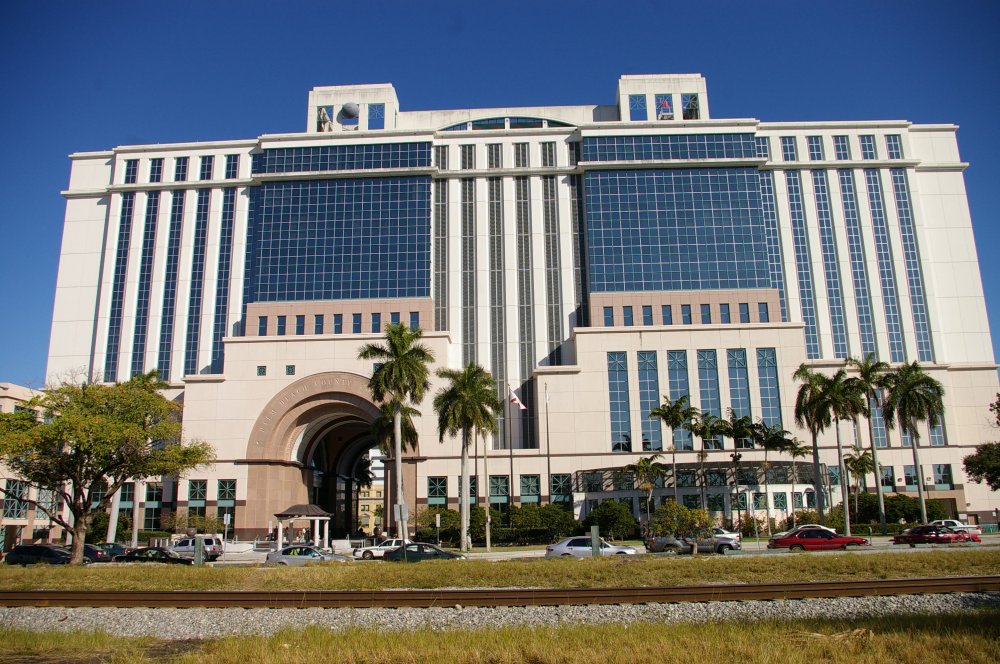 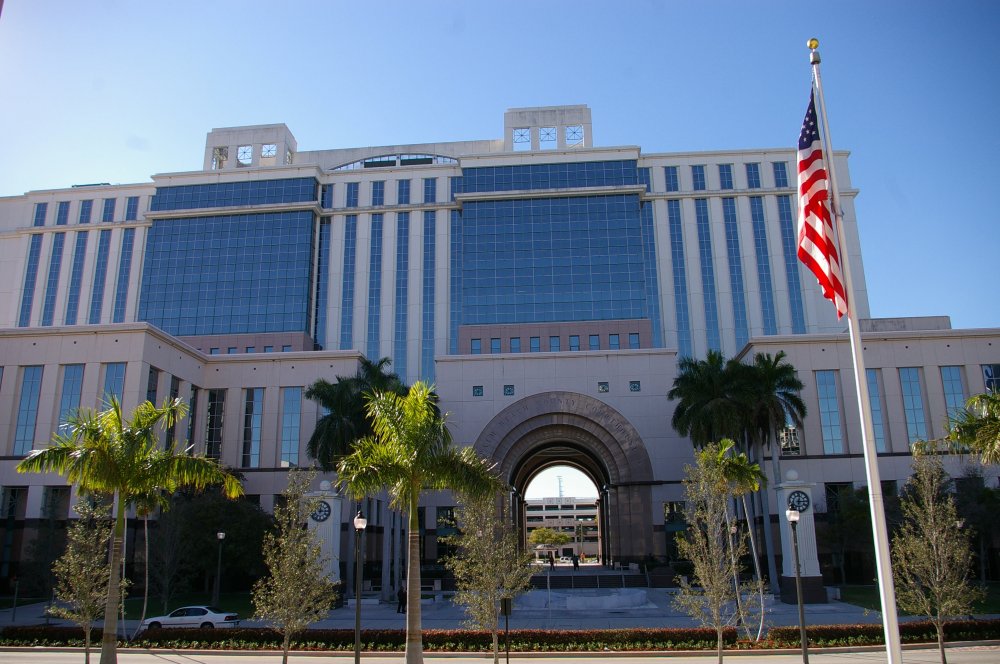 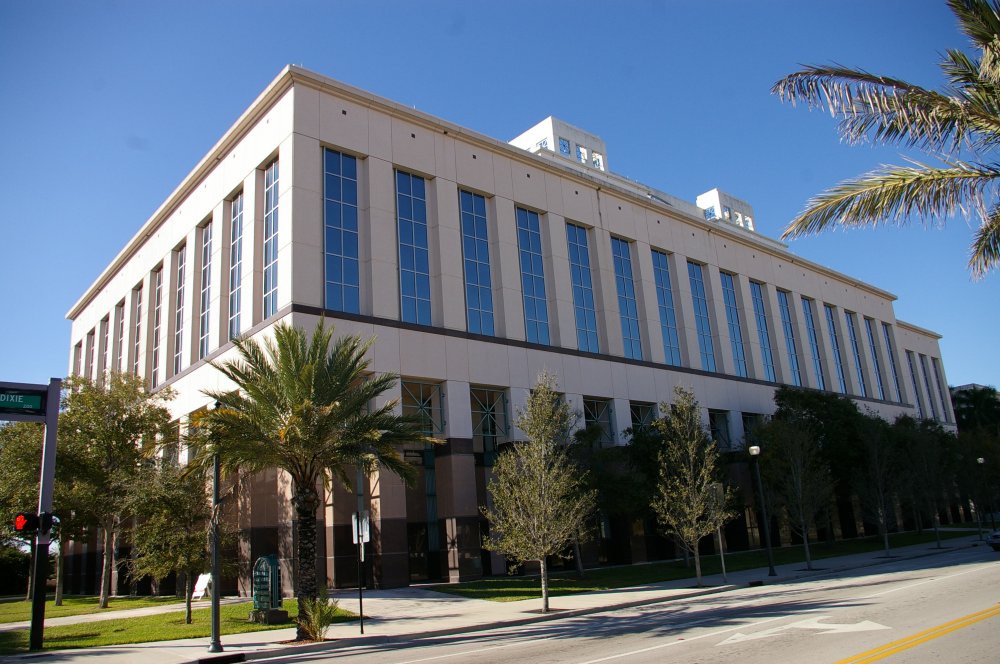 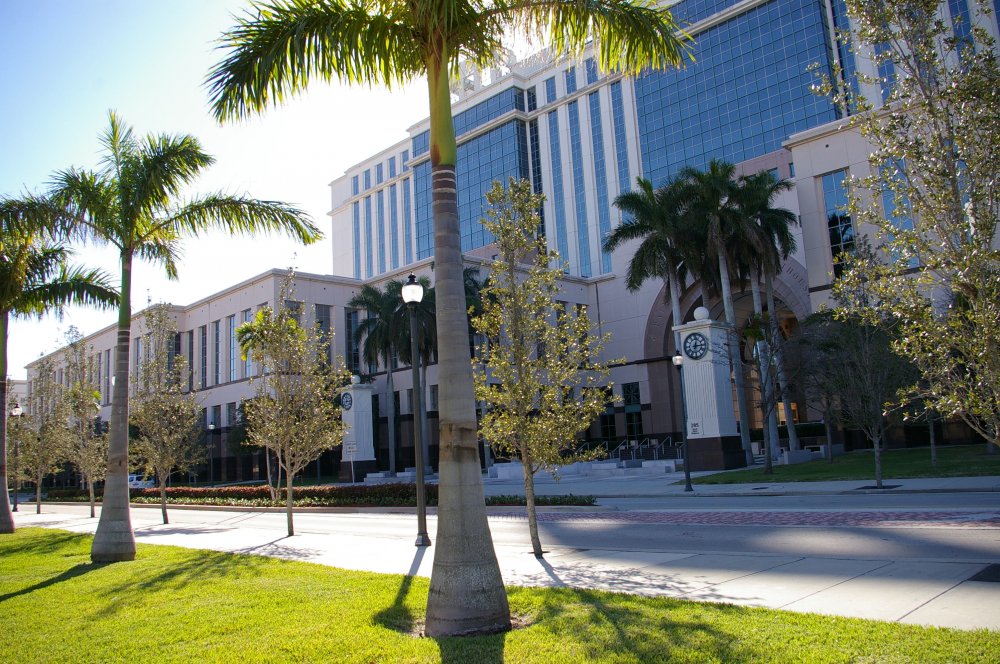 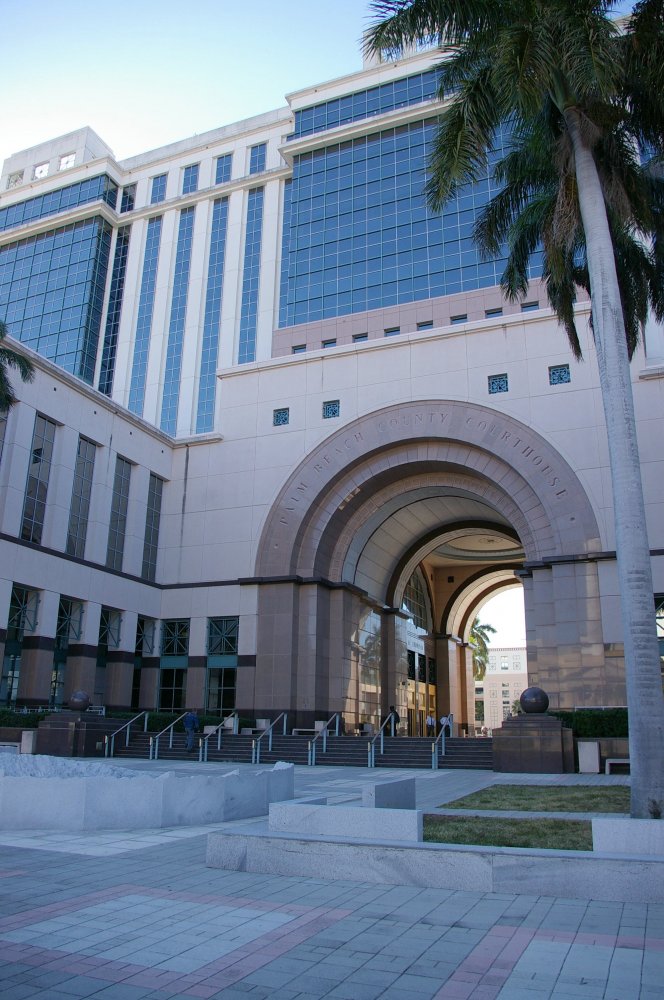 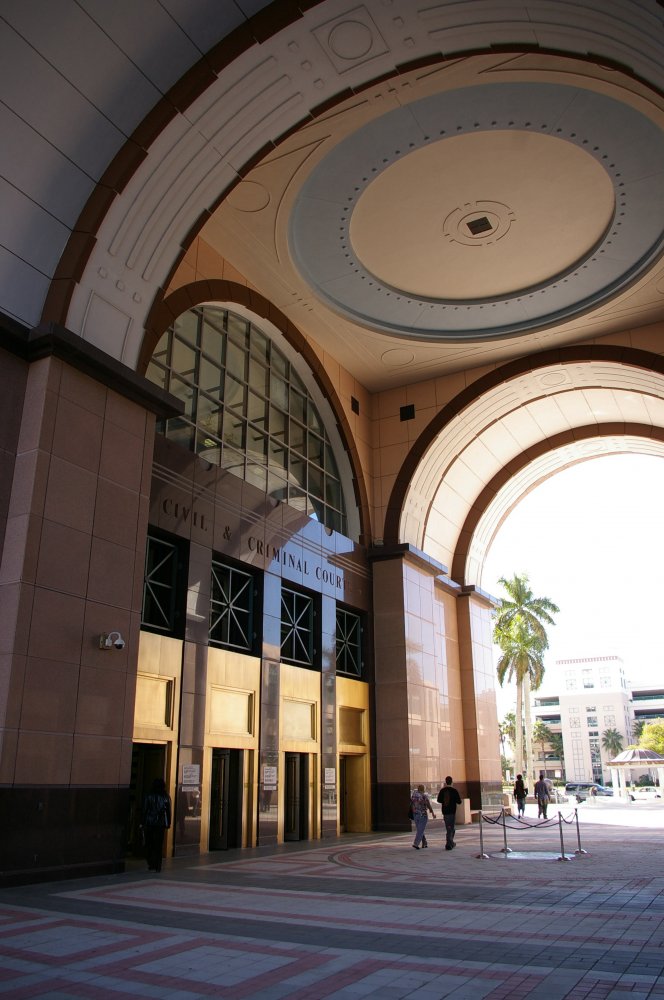 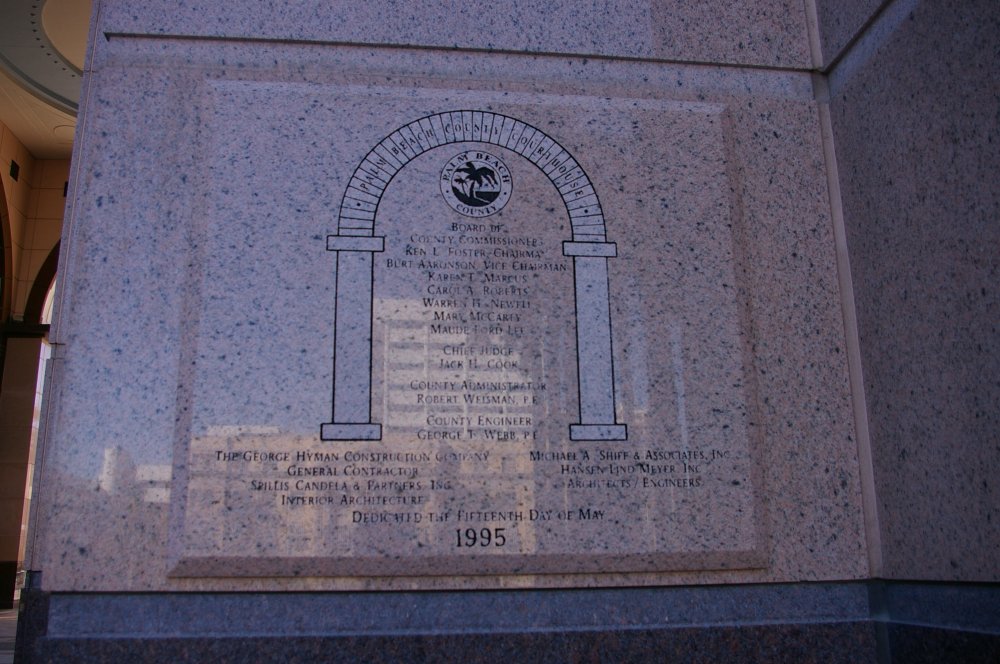 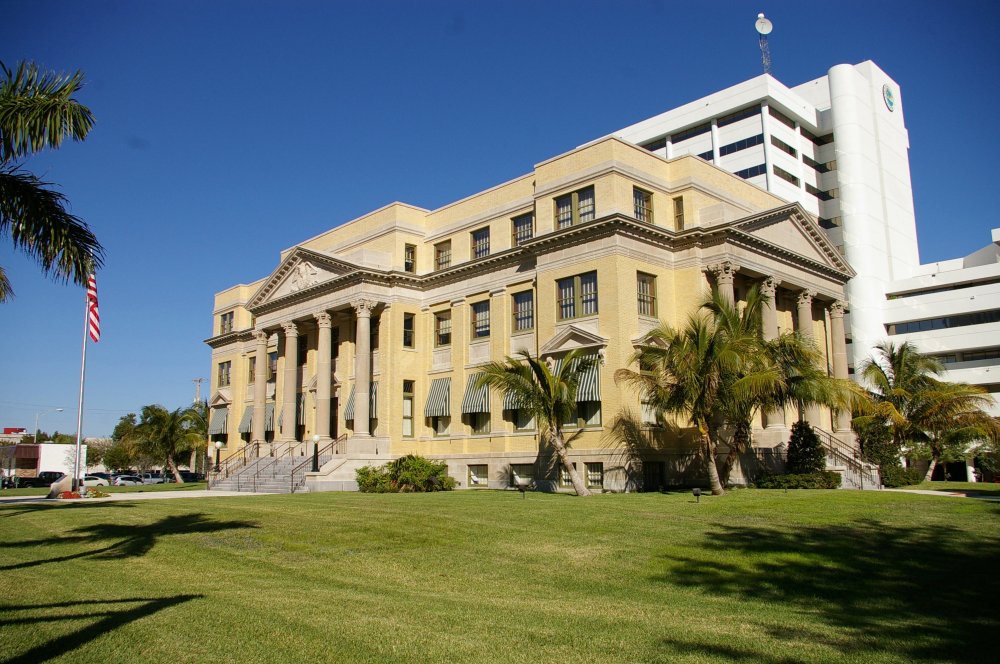 Behind the Old County Courthouse is the County Government Center