Manatee County is named for the Manatee River which is named after the manatee or sea cow ( Trichechus manatus ). 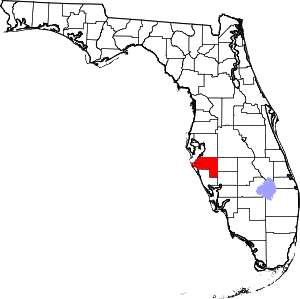 Description: The building faces north and is a three story buff colored brick and concrete structure. The building is located on the landscaped grounds of the Courthouse Square in the center of Bradenton. The building features Doric columns, terra cotta cornices and porticos on all four elevations. The north and south sides include pediments over the porticos. The north front has a portico supported by four white colored columns rising to a pediment above the second story. The east and west sides project from the main building. There are long colonnades on the east and west side. In the interior, there was a central rotunda under the dome which was remodeled and enclosed in 1927 when the dome was removed. The former courtroom is located on the second story used to extend into the third story. The building was expanded on the south side in 1926 to 1927. The building was remodeled in 1954. Description: The building faces west and is a nine story red and buff colored concrete and glass structure. The building is located on the east side of the courthouse. in the center of Bradenton. The building has a high glass walled lobby on the northwest side under an overhanging projection. The building has square lines and small windows. The roof line is flat. The building houses the Circuit Court of the 12th Judicial Circuit and County Court. Note:  The building is the oldest surviving Florida county courthouse. Description: The building faces south and is a nine story glass and buff colored concrete structure. The building is located on landscaped grounds in the center of Bradenton. The retangular shaped building has horizontal windows. Pillars support the front with open space below the sixth story. The roof line is flat