Columbia County is named for Christopher Columbus, who was the explorer who discovered America. 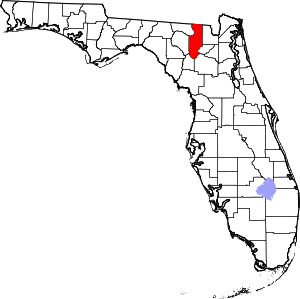 Description: The building faces west and is a three story brown colored brick and buff colored brick and concrete structure. The building is located on landscaped grounds in the center of Lake City. The west front has a portico with three arches on the first story and four columns rising from the second story to the top of the third story with pediment at the roof line. On the center of the roof is an octagonal cupola with clock and smaller cupola at the top. The building houses the Circuit Court of the 3rd Judicial Circuit and County Court. An.addition was added on the east side in 2003. The architect was Saxelby Architecture Inc. and the contractor was Contec Rooney Construction Company. Description: The building faces west and is a two story buff colored brick and concrete  structure. The building is located in the center of Lake City to the south of the courthouse.. The center of the west front has a colonnade of arches on the first story the north and south wings project from the main building. The first story windows are arched and there is trim along the corners and around the windows. The roof is hipped.  The building was constructed as as a Post Office.