Brevard County is named for Theodore Washington Brevard, who was the State Comptroller and a judge. 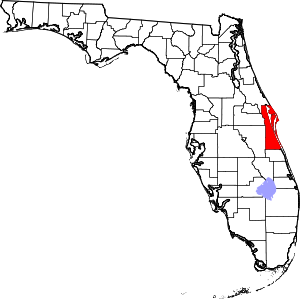 Description:  The building faces east and is a three story white colored concrete  structure. The building is located on landscaped grounds in the center of Titusville. The east entrance has a portico supported by four large white colored columns rising to a pediment at the roof line. A cornice ruins below the roof line. In the interior, the courtroom is located on the second story and smaller courtroom is located on the first story. The building houses the Circuit Court of the 18th Judicial Circuit and County Court. The building is named as the Vassar B Carlton Historic Courthouse. In 1925, three large wings were added to provide office space. Three large flat roof additions have been added on the two sides and the rear fascade. The building was renovated in 1962. The architect was Hirshberg and Thompson and the contractor was Earl Downs Construction Company. Description:  The building faces south and is a five story concrete structure. The rectangular shaped building is located on landscaped grounds in the center of Titusville to the north of the courthouse. The windows are horizontal. The first story is recessed with pillars and recessed entrance. The roof line is flat. In the interior, the first story has a wide atrium.

History:  The county was created as St. Lucie County in 1844 and Susanna was selected as the county seat. In 1879, the name was changed to Brevard County and the county seat was moved to Titusville. The first courthouse was a two story frame structure built by Peter Fisher and Andrew Froscher in 1882. The second and present courthouse was constructed in 1912 to 1913 at cost of $31,477. The additions in 1925, cost $80,000. The County Government Center was constructed in 1968 to 1969.