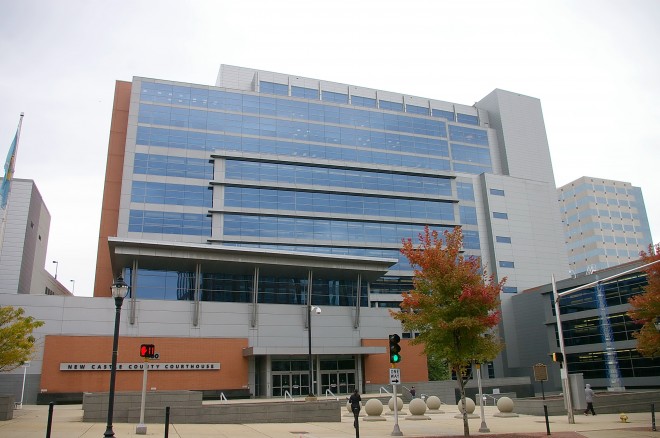 New Castle County is named for the town of New Castle by Dutch Governor Anthony Colve as an Anglicization of “Nieuw Amstel”.

Description:  The building faces west and is a fourteen story concrete and glass structure. The building is sited on a five-acre parcel of land. The building forms an “L” shape with a low four story south wing and a higher east wing. On the west front is a large plaza. The central recessed entrance is on the first story of the east wing. Red colored brick facing is along either side of the entrance. Above is a projecting section with glass panel walls. The windows of the east tower are horizontal. The roof line is flat. The building also houses the Family Court and the Delaware Chancery Court. Description:  The building faces west and is a three story structure. The west front has a colonnade with entrance section on the north and south sides. The entrances have large fanlights and motifs with a pediment at the roof line. A balustrade runs along the flat roof line. The building was named as the Daniel Herman Courthouse. The building is now an office building. Description:  The building faces southwest and is a two story concrete and glass structure. The southwest front has a two story recessed glass walled section which projects from the main building. The main building has horizontal windows and the roof line is flat. The building is named as the New Castle County Government Center and was formerly a commercial building which was renovated to house the county offices.