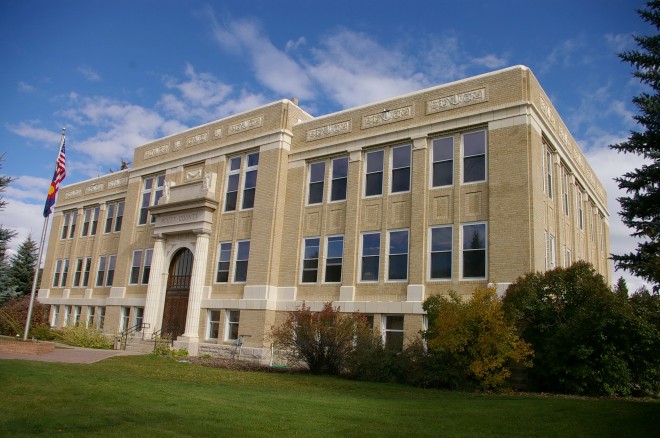 Routt County is named for John Long Routt, who was the last territorial governor and the first state governor. 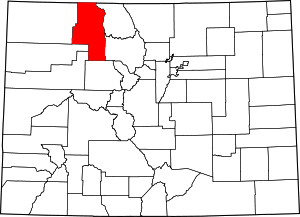 Description: The building faces south and is a three story buff brick, stone and concrete style structure. The rectangular shaped building is located on landscaped grounds in the center of Steamboat Springs. The south front has a projecting center section rising above the roof line with central entrance flanked by Doric columns rising to a header above the first story. The entrance forms an arch. The central columns and entrance are capped with an inscription stone. Above the inscription stone appears acanthus leaf swag in sculpted stone above and in between two eagle statuary.  The building has a raised basement. A white colored terra cotta belt course separates the ground level from the two stories above. Geometric patterns in the brick separate the second and third stories. A second string course of white colored terra cotta, wraps the building above the third story windows. The roof line is flat. Located on the third story is the 200-square-foot courtroom and a smaller courtroom. The building was renovated in 2007. The architect was Andrews & Anderson and the contractor was Holmquist-Lorenz Construction Company. On the north side of the courthouse is the two story Courthouse Annex.

Note:  The façade’s blond bricks came from Golden and were laid in a symmetrical design with squared pilasters that delineate the building into nine vertical bays transected by two horizontal terra cotta rings that clearly mark the individual stories.

Note:  It was told that a young boy walking by the courthouse in the early 1920’s heard a voice. It was the sheriff in distress having locked himself in the “bear cage”, a jail cell that was relocated from the jail in Hahns Peak. The cage once held the infamous Harry Tracy, a member of the Butch Cassidy gang from which he escaped in 1898. 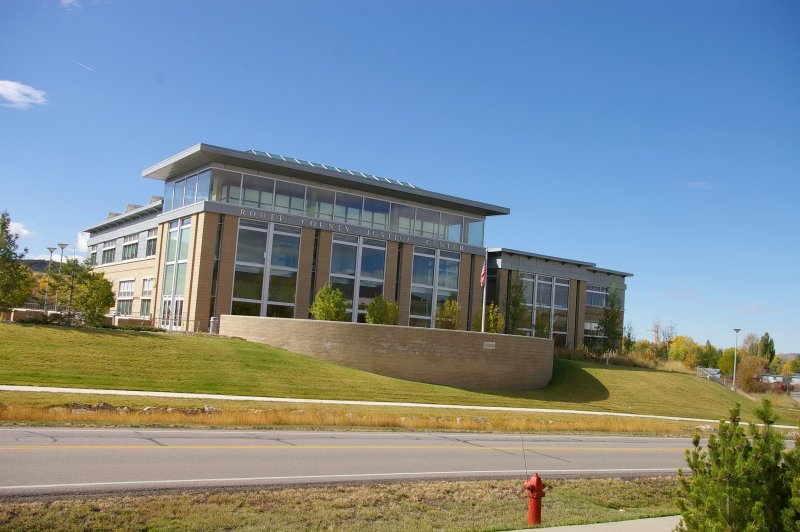 Description: The building faces north and is a three story buff colored brick, concrete and glass structure. The building is located on landscaped grounds to the north of the center of Steamboat Springs. The north front has three large window areas with a horizontal window area below the flat roof line. The upper story is a gray color. On the south side, the building descends the slope with an entrance on the first story. The building houses the County District Court and County Court of the 14th Judicial District.

Description: The building faces southwest and is a two story red colored brick and concrete structure. The rectangular shaped building is located in the center of Steamboat Springs to the north of the courthouse. The roof line is flat. The building known as the Lorenz Building served as the courthouse from 1912 to 1923. After 1921, the courtroom was located on the second story. The building, being the first brick building in Steamboat Springs,  was built for J W Hughes & Company in 1900 and was used as a general store. The original building was a wood warehouse structure erected in 1893 and purchased by J W Hughes in 1898. After 1923, the building became a dance hall called the Social Benefit Association.

History:  The county was created in 1877 and Hayden was selected as the county seat. The first courthouse was a log cabin erected by Albert H. Smart in 1877 at a cost of $100. The county seat was moved to Hahns Peak in 1879 and the second courthouse, a two story wood frame structure was built. The county seat was moved to Steamboat Springs in 1912. The third courthouse was a two story structure known as J W Hugus & Company building on Lincoln Avenue between Ninth Street and Tenth Street ( Lorenz Building ) which was purchased in 1915 for $7,000. The fourth and present courthouse was constructed in 1922 to 1923 at a cost of $122,000. 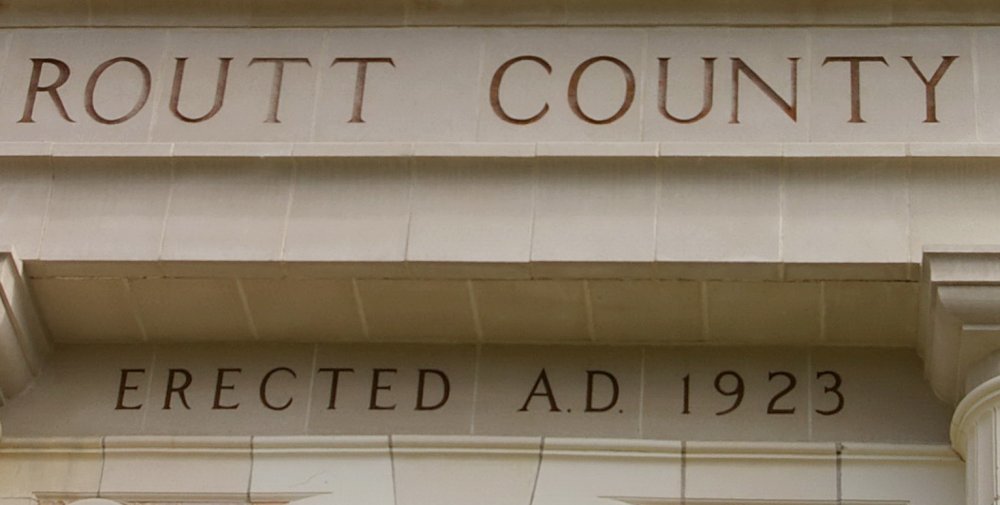 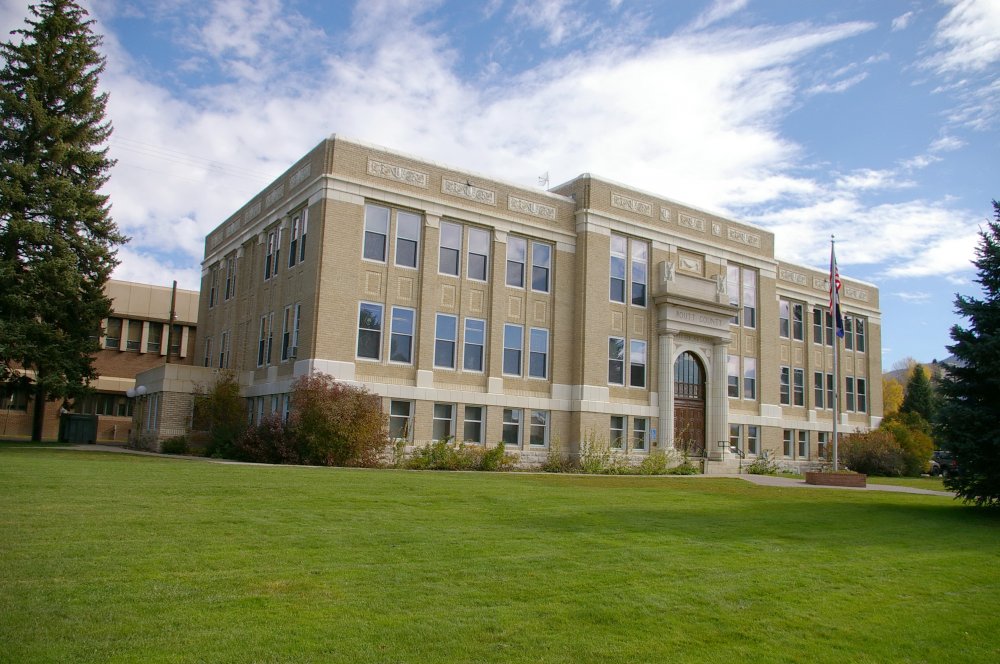 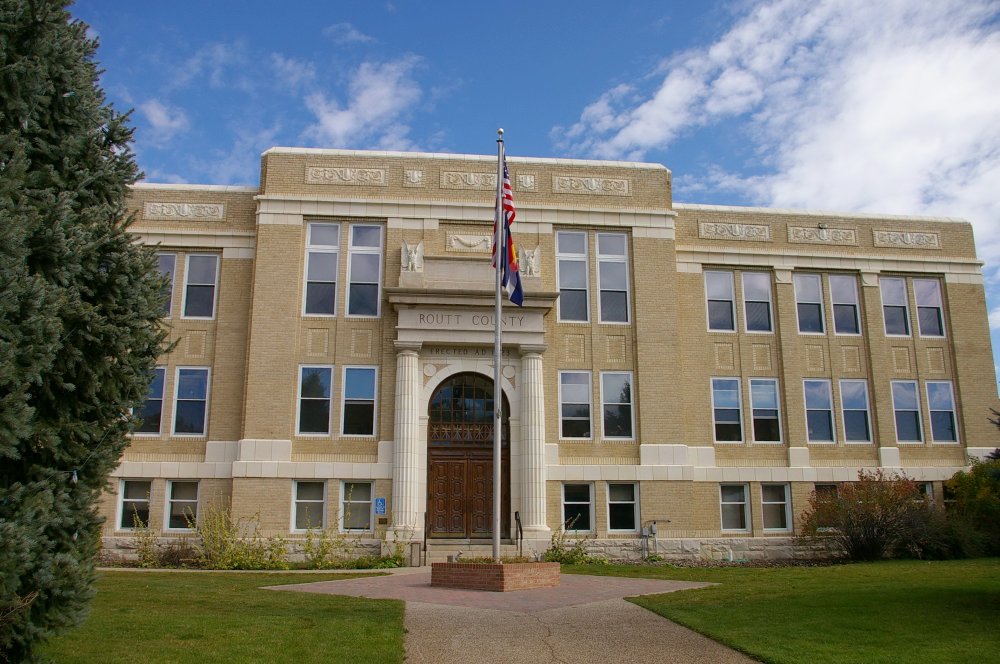 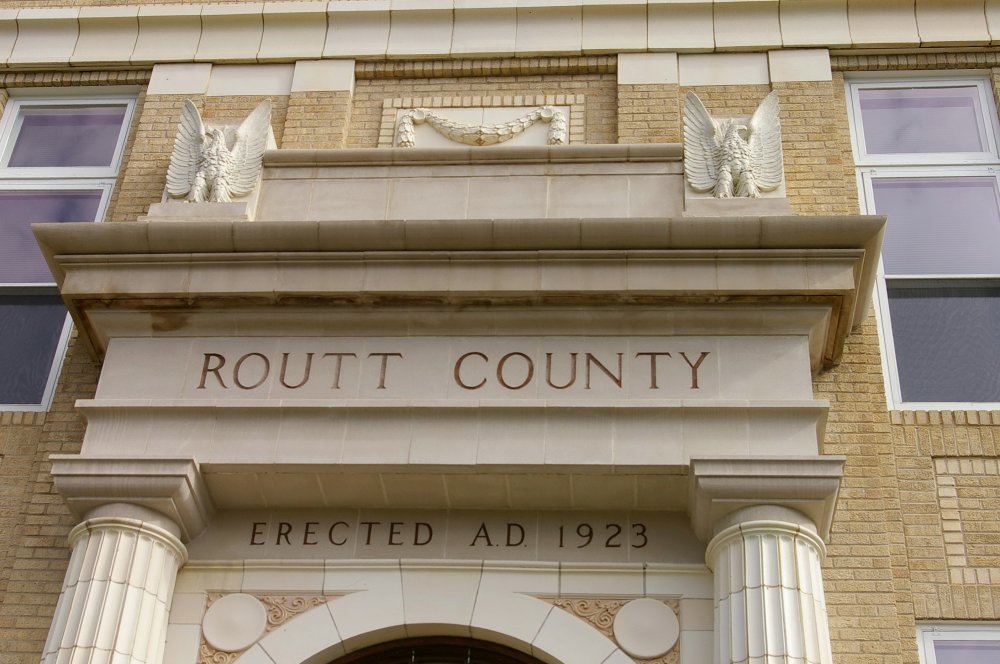 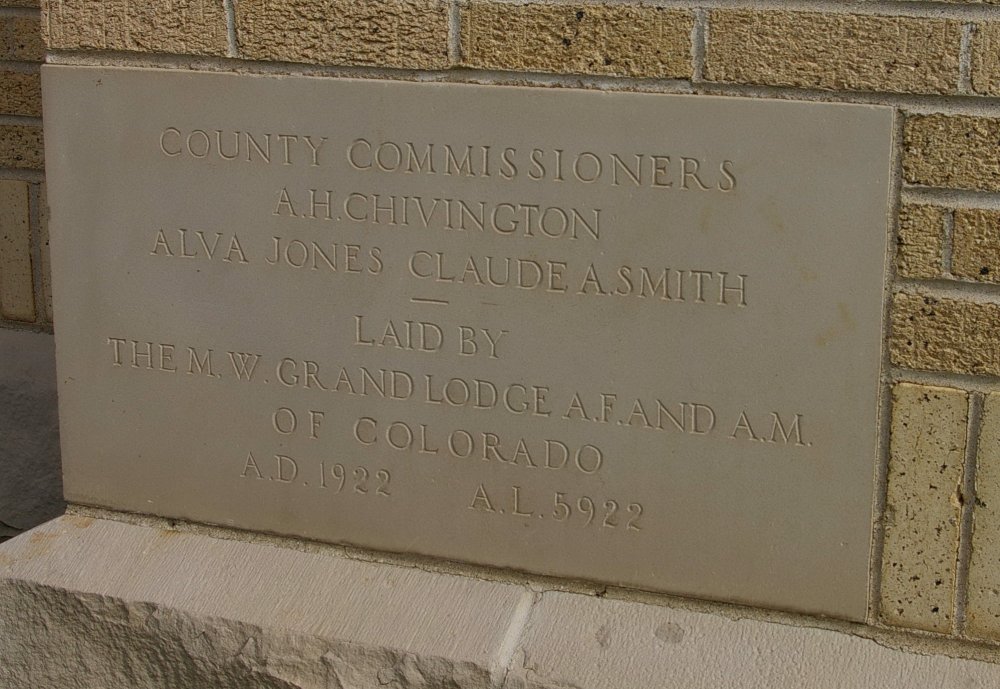 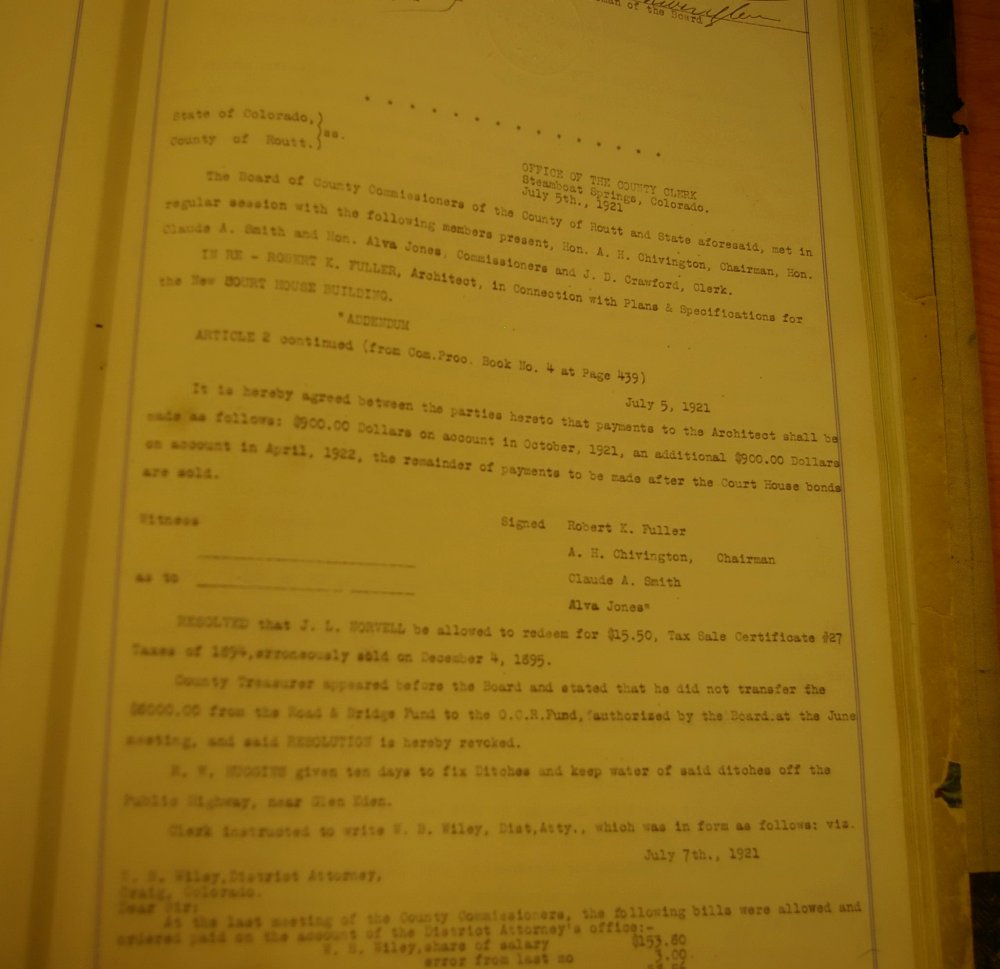 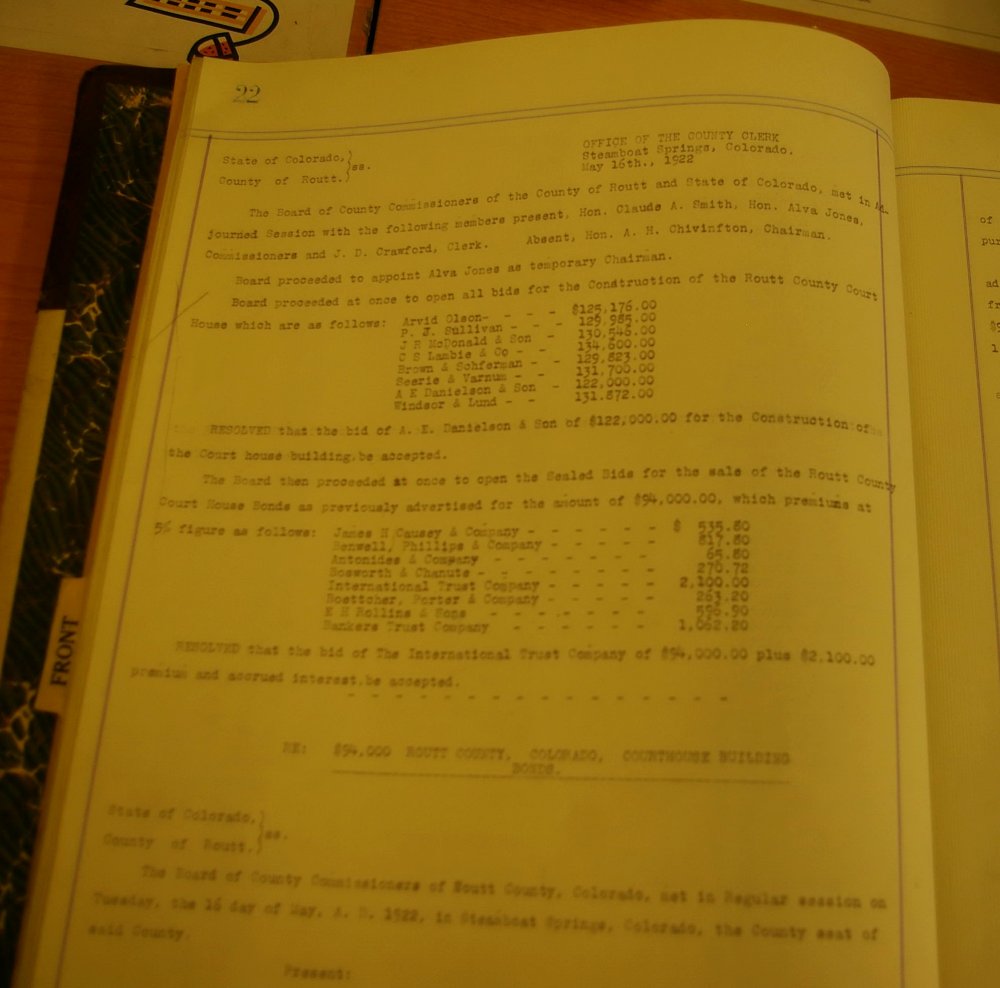 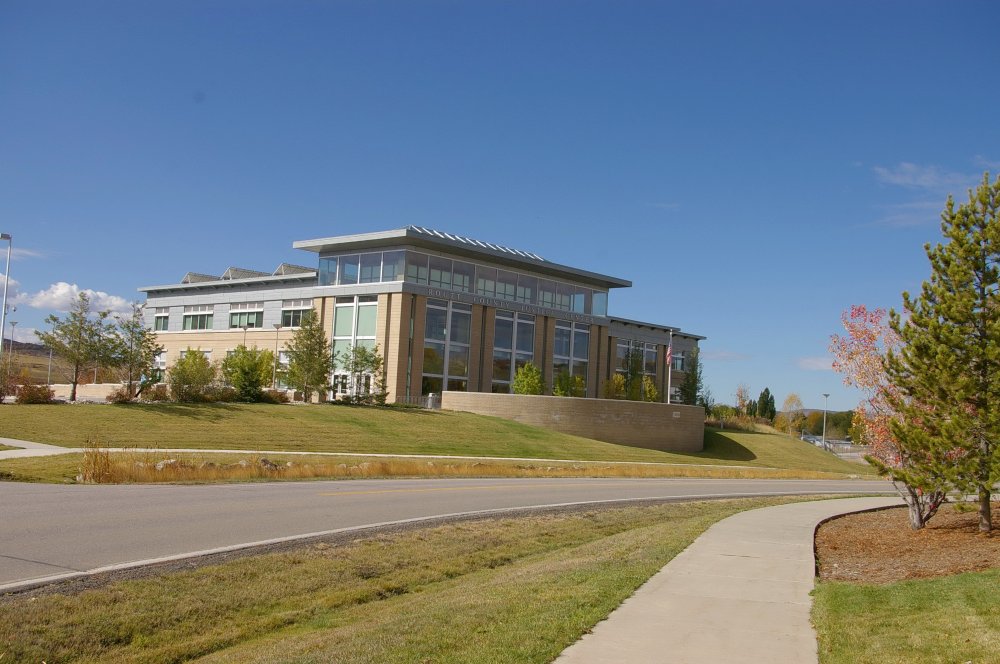 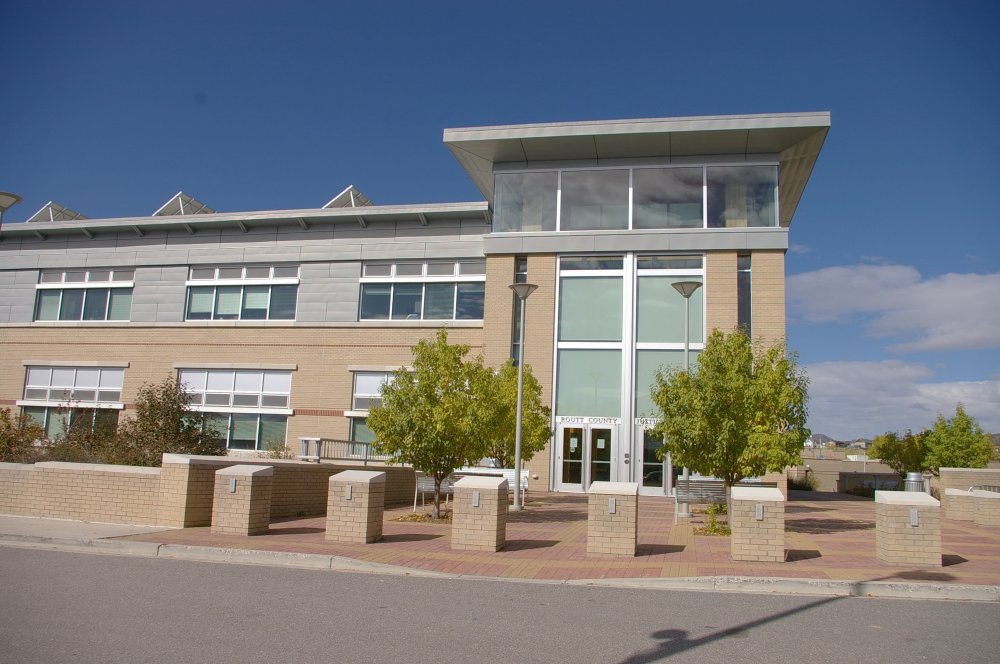 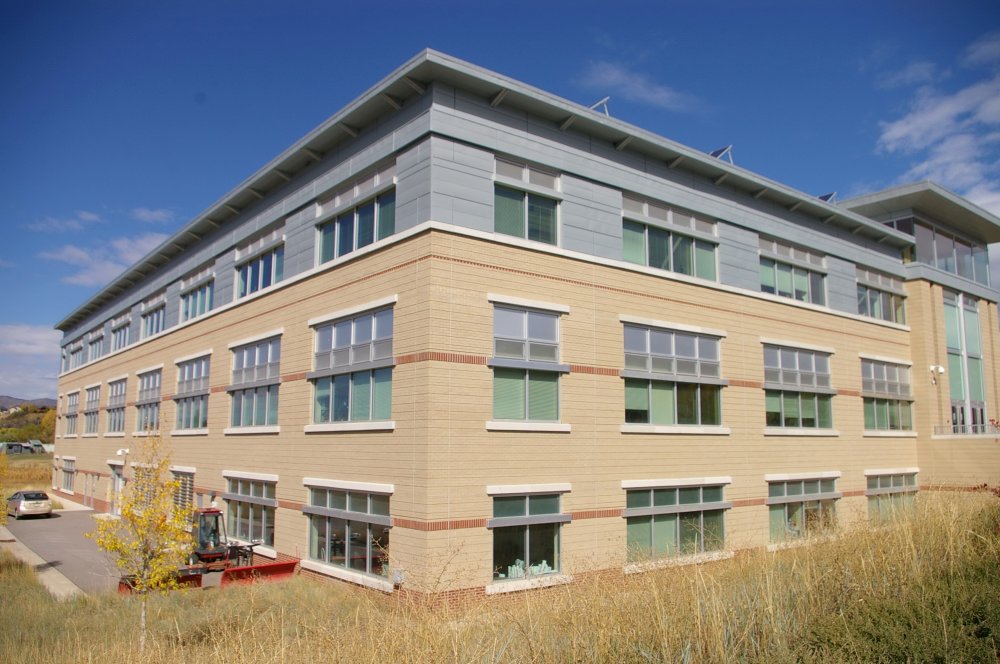 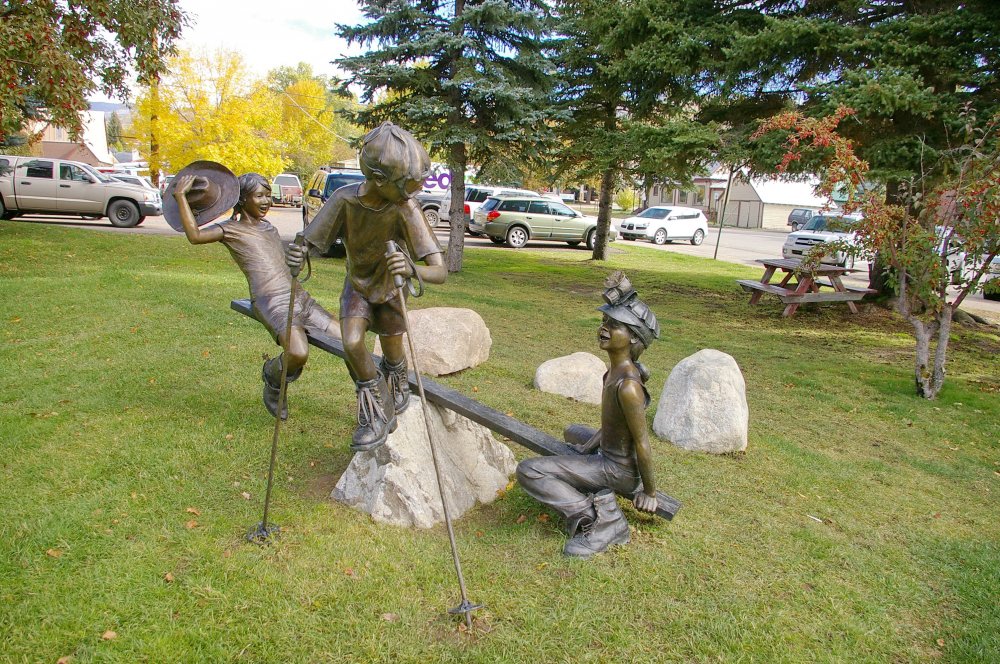